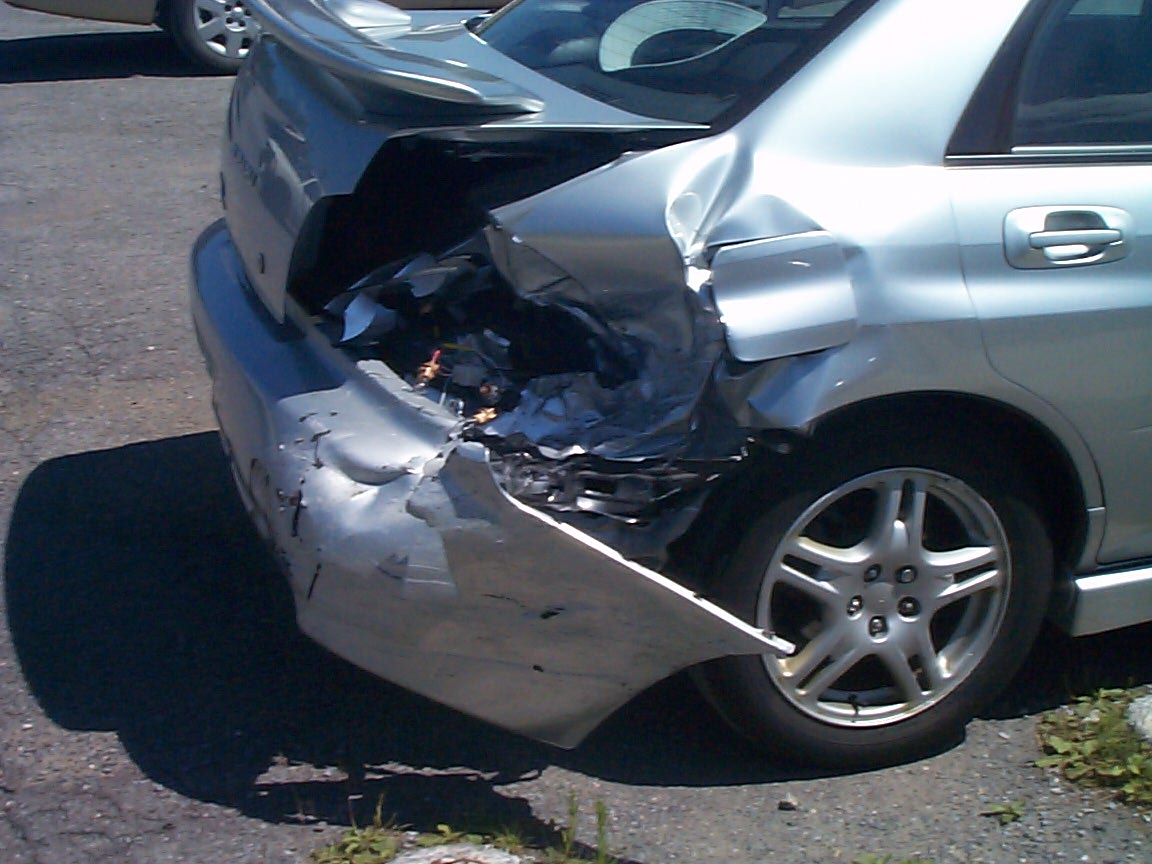 If you want cradle-to-grave protection, be prepared to pay for it.  On the other hand, if you are resourceful, you can ameliorate risk and come out ahead.

And no, the hail damage wasn't THIS bad!

One way to save on car insurance is to own an older car with no collision or comp, or to raise the deductible on your car insurance to $1000 (if you have a loan, check with the lender first).  Other ways are to eliminate glass coverage or rental car insurance coverage (that provides a free rental car if yours is in the body shop, for example).

To some folks, this is an anathema.   "Suppose you get into a wreck?  How can you pay for the repairs?  How will you get to work?" they say.   And of course, my response is, if you can't find $1000 in your budget, then maybe you need to be rethinking your budget priorities.  And if you can't take the bus to work or carpool a few days while your car is in the shop, you aren't trying hard enough.

And if these things make you afraid then I really can't help you here.  Because fear is not an emotion to be trusted.

However, if you are a careful driver, over time, you will come out ahead, no matter what.   Low-deductible collision and comp means more trivial claims for the insurance company, and as a result, rates will be higher - far, far higher.  If you can live with a higher deductible - or no collision insurance, for an older car - you can come out ahead over time.

Recently, we put this concept to the test, as our truck was caught in a major tornado and hail storm in El Paso Texas.   There really is no good reason to go to El Paso, and a hail storm sort of drives home the point.   Hail fell for about a half hour, it seemed, with pieces as small as mothballs and as large as golf balls.   The sound was deafening and it was a bit frightening.  I expected the windshield to be shattered at any moment.   Fortunately, it was not.

However the hood of the truck, and to some extent the roof (protected by a Kayak) was peppered with small dents.  A two-year-old truck, and it looked like hell!   Oddly enough, the fiberglass Casita trailer sustained no damage other than a taillight lens broken.  The plastic things - the camper, the camper top on the truck, the kayak - all absorbed the shock from the hailstones and showed no damage.  Metal things, like the hood, were peppered.

So, off to GEICO for a claims check.   They looked over the truck and said it had about $2500 in damage, including a new hood, which would cost $350 plus painting.  With the deductible, they gave us a check for $1500 and we went on our way.

On the way through Mississippi, I found a wrecking yard with a hood from a Pathfinder (the same truck) in the same color no less, for $200.  It took about 20 minutes to swap out the hood (which would have taken less time, but I had one of those hood protector things on the old one).  Back in business!

We plan on keeping the truck at least another 100,000 miles, and over time, vehicles do get dents and dings and scratches - it is inevitable, particularly if you go down gravel roads or park in urban areas.  So even repairing the minute dents in the fenders (about three) might be a waste of money, as the truck will get dinged up over time.     But we'll see.

At the same time we were at the GEICO center, a nice young couple was there with an older Camry, that had been in a minor fender-bender.  They had a low-deductible policy and also car rental policy.   The nice adjuster man got them a rental from Enterprise and then took the Camry (the adjuster shop is also a body shop) to be repaired.  It was an older car, and arguably will be in better shape when they get it back than it was before the accident.

However, instead of making $900 in the transaction, they paid $500 for all of this - their deductible.  Was it worth it?  Because in addition to the deductible, they paid far more than the $42 a month I pay for insurance for my truck - for several years.   The overall delta in cost could be in the thousands of dollars, perhaps even over $10,000 if they had the car for any length of time.  All to insure a decade-old Camry worth maybe $5000 on a good day.

Of course, they were "poor" and viewed the Camry as some major asset, and were afraid of losing it.   After all, it was a struggle to buy it, right?  So paying $150 a month in car insurance (which isn't hard to do, particularly when you are young) seemed like a good bargain to them, to protect a $5000 asset (that cost them $10,000 many years ago).

And of course, the insurance company knows all about this.  They know how often you will get into an accident, based on your age, sex, and driving record.  They know how much your car is worth and exactly how much it will cost to get repaired.   They know a lot.  We know little.  And they know they can make a profit on collision insurance (which is the name of the game in the insurance business, after all) if they can get scared, frightened people to pay a lot of money to insure trivial assets with low deductibles, as well as buying "rental car insurance" and "towing insurance" to boot.

And this is why I own Class B stock in Berkshire Hathaway, the parent company of GEICO.  It is why insurance companies are often a good investment.  They know things we don't and sell us insurance based on our ignorance.   Hey, for mere pennies a day, you can get a term life policy!  Never mind that the odds of you dying young are slim, and that those "pennies a day" invested over time would come out to far more money.  To us plebes, it seems a bargain.

This is not to say insurance is a scam or a bad thing.  A term life policy is a good idea for a young family starting out.  It is cheap and if Dad (or Mom) dies, the kids will be cared for.   Similarly, this is not to say you should cancel your collision and comprehensive insurance on your car.   It is only to say you  should think about the coverage you are getting and whether or not you are falling for the same argument made by the extended warranty folks - namely for "pennies a day" you can insure something worth thousands.

But you have to realize that pennies a day turn into hundreds and thousands over time.

By the way, another way to save on insurance (besides being older) is to own a car that is cheap to repair and easy to find parts for.  The Nissan Frontier, slated for an overhaul in 2018, has been in production largely unchanged from 2005 to 2017, which is an eon in the automotive world (most automakers update platforms on a 3-5 year basis).   They literally made millions of them. Parts are therefor cheap and easy to find.

More esoteric cars, on the other hand, made in limited numbers, have higher repair costs.   The number of M Roadsters, for example, number in the thousands (about 5,000 including overseas sales).  There are no bargains on eBay for some of the unique body parts.   Parts for a Toyota or Nissan, on the other hand, abound.

For example, a nice homeless man decided that he wanted our sneakers in San Antonio, and using a screwdriver decided to shatter our side window while trying to pry it off.   Fortunately, the alarm went off when he tried to open the door, and our cheap-ass sneakers were safe.   And fortunately, a new piece of side glass is only $37 on eBay, including shipping, and is not hard to install (indeed, it can be removed with a screwdriver, as Mr. Homeless man illustrated for us). 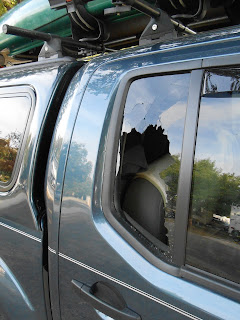 Another reason my sympathy for street people, criminals, thugs, and other marginal folks in our society is rapidly evaporating - if it has not already gone.

Sadly, the San Antonio Police, other than filing a report, were not interested in solving the crime, as it was a "mere property crime" - never mind that it took place behind the courthouse and under a security camera.   One homeless man with a screwdriver can break dozens of windows a day, and likely the "crime wave" of break-ins in that city are caused by a remarkably small group of people - or one person.

Yes, when I tell this story to others, they say they had the same experience in that City.  Apparently, breaking glass is what they do there.

Oh well.  At least the rock chip, thrown up by a Prius, no less, was repaired for free by Safelite.   Again, even if you don't have glass coverage, check with your insurance company, as many will repair rock chips for free, with no deductible.

Sometimes there is a free lunch.....