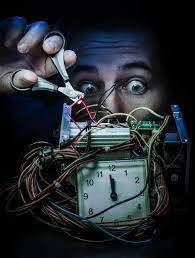 Maybe it is a product of our modern society, but today, no one is forgiving of anything it seems - with disastrous results.  Not all of us disarm bombs for a living!


In an era not too long ago, mistakes were tolerated more freely.   It was expected that things would get messed up, as it is part of the human experience.  And as a result, we built into most human-made systems, ways to correct or repair errors.

Our Constitution, for example, anticipates that changes would be needed over time.   Today, if there is one typographical error in Obamacare, people call for its repeal.

Similarly, with many companies and organizations today, there is an insane insistence that everything be done perfectly the first time, with no margin for error.   Assembly lines run on a "just in time" inventory system, so if one nut or bolt is out of place, an entire factory shuts down.   Small airplanes and trucks stand by to rush in parts at the last minute, if something goes wrong.

Similarly in the business world - and particularly the legal one - there is no margin for mistake.   One mistake is all it takes to end a career in business.   In the medical field especially.   And if you make even one small mistake, an army of lawyers will pounce on you and sue you out of business.

In the entertainment world and politics (the same thing, I guess), all it takes today is one mis-step or one poorly worded statement, and you are out of a job - or out of office.   Make what seems to be a racist tweet, and it's all over.

Today we have "zero tolerance" policies in school, which expel students if they make even one small mistake due to youthful exuberance.   In our criminal system, mandatory minimum sentences and "three strikes" laws leave no room for real justice to be done.

For young people starting out, this zero tolerance policy has ended many a career before it has begun.   Bad credit?   Poor Grades?   Late on your student loans?   Failed a drug test?   Got arrested?   Failed the background check?   Too bad for you, buddy.  Maybe there is a job for you at a tattoo parlor or something.

Is this a good thing for humanity?   This take-no-prisoners approach to life?   I think not, and for several reasons.

First of all, it cranks up the stress level on everyone.   At home, at work, online, or whatever, we all walk on eggs all the time, fearful of even one screwup.   Post something online with a mis-spelled word, and 20 people will jump down your throat to point it out.   Have a bad day at the restaurant?   Yelp will have you out of business by the end of the day.

But this sort of zero-tolerance practice has an even more insidious effect on our society.   In a society that does not tolerate error at any level, people become so fearful of making an error that when caught, they will try to "bury" their mistakes.   This usually means that their mistake will be compounded, catastrophically.   A simple leak in a pipeline becomes a reactor meltdown.

I ran into this effect recently trying to title my car.  The lady at the car dealer was supposed to handle the title and tags.  She screwed up both.   I ended up getting the tags myself as a favor to her - but of course, she didn't see it that way.  It was the DMV's fault or someone else's, not hers.   Rather than own up to the error and say, "Gee, I'm sorry" she acted like I caused the problem.

On the way back from the DMV, I realized to my horror that she had titled the car in the wrong name - she left Mark off the title.   So I called back and once again got the blame game turnaround.  Nothing could be her fault, as if it was, then she would get blamed for it.   So instead of a "I'm sorry, I'll fix that right up for you!" she tried to bury the mistake by saying I had to live with it.  This way, she hoped, I would just meekly go away and no one would ever find out she made an error.

Well, of course, that wasn't going to happen.   I wasn't going to live with a mis-titled car.   So I had to escalate the matter, and now her boss knows about it, and rather than sweeping it under the rug, the entire thing has blown up in her face, which she should have realized would have happened.   And it all could have been avoided by simply admitting the mistake and then fixing it.

We all make mistakes.  I had a similar problem with a Patent recently.   I mistakenly assigned the rights to one Patent to one organization, when it should have been assigned to two.   Now arguably, I could have blamed the client for not being clearer about the matter.  But rather than play the blame game, it is a lot easier and more effective to say, "Gee, sorry about that, I'll fix it right up for you!"

And it really isn't hard to fix - just some documents to be signed and filed.   It takes a few minutes, really.   And the same is true for car titles.   In the history of motor vehicles, I am not the first person to have a typo error or other problem with a title.   There is a way to fix these things.

(Sadly, in the Patent business, fewer and fewer things can be fixed.  When I started in this practice nearly 30 years ago, almost anything could be fixed with an amendment or a petition and a "my bad" and a small fee.   Today, there are many aspect of this business which have zero-tolerance characteristics.   You mess up something today, and it literally may cost you your career.   I yearn for retirement as a result).

But in an organization that tolerates zero errors, well, people get paranoid and do weird things.  They deny reality.  They bury their mistakes.  They hide malfeasance.  And these things, when hidden cause greater problems down the road.

Zero tolerance for error is probably what sunk the Germans in World War II and the Russians in the cold war.  When you realize the penalty for error is being stood in front of a firing squad, you either take no risks at all, or spend your entire day documenting and double-checking things, so you can blame others when things go wrong.

Perhaps it is our increased reliance on electronic communications that has fueled this trend.   We expect instant gratification today, and everything has to be perfect from the get-go, or we turn to social media to vent our frustrations.

But it needn't be that way.   Yes, the guy disarming bombs has a zero tolerance environment to work in.  On the other hand, if he fails, the consequences are all on him.   A surgeon has a near-zero tolerance environment to work in as well.   And in the past, many a doctor buried his mistakes and we accepted this as part and parcel of a medical system as we were just glad that there was a possibility of being healed.   Today?   One mistake and your malpractice premiums will go so high as to drive you out of business.   We are no longer a forgiving society.

But this fails to explain why we have taken so many other areas of our lives and made them subject to such draconian consequences.   Why do parents go and scream at a school principal when their kid gets a "C" in third grade?   Why are parents convinced that getting into the right pre-school in Manhattan is a precursor for success at Harvard?  Why do we have "Tiger Moms" and "Helicopter Parents"?

It really makes no sense at all.  We are placing artificial pressures on ourselves, for no reason whatsoever, other than to crank up our own stress levels and degrade our own quality of living.

Let's bring back the do-over, the apology, and mistakes were made.  Rather than calling for someone's head every time something goes wrong, maybe it would be more constructive to fix the problem and get to the root of what caused it - and provide a mechanism to fix similar problems in the future.

Maybe this is a crazy idea.  Maybe it would be better if we all became fault-free robots marching in lock-step.   Maybe not.
Newer Post Older Post Home