The Most Evil Company? 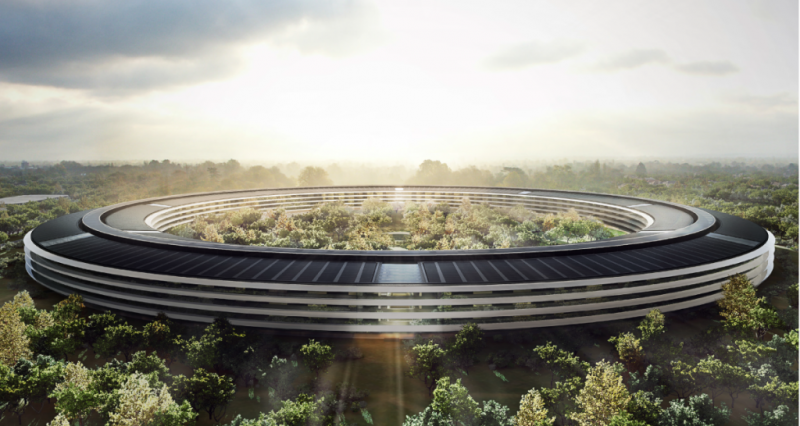 The Alien Replicants who work at Apple are ready to fly back to the home planet.

Apple has almost completed its new flying saucer headquarters in Cupertino, California. Once it is completed and all the employees - who are alien replicants - are on board, it will take off and return to the home planet, forever leaving the Earth behind.  Having done its job and infecting our planet with the iPhone, Apple aliens (Appaliens?)  no longer need to stay.

America is in the midst of an opioid crisis, and many people are pointing fingers at large pharmaceutical companies for looking the other way as distributors and doctors diverted millions of pills to drug addicts.  Tens of thousands of people have died as a result of this highly addictive drug.

However, Apple has scored a coup over the drug companies by creating an electronic drug in the form of the smartphone.  Not only is it far more addictive than opioids, it is far more pervasive. Nearly everyone in the United States now has a smartphone, while only a small number are addicted to heroin. And thousands, if not tens of thousands of people, have died as a result of smartphone addiction, usually while texting while driving.

And like drug addiction, cell phone addition has ruined lives, careers, and marriages.  It is certainly ruining the Presidency!

While touring our little island the other day, we went down to Clam Creek, which has a beautiful view of Jekyll sound.  I saw a number of people sitting on benches facing the water, but instead of enjoying the view, they all had their heads down and these little flat bricks in their hands which they were studying intently.  Yes, they were smart phone addicted.

Others were riding bicycles with their family members, stopping every few feet to take a picture so they can post it on Facebook.  Later on in the hotel room they would carefully go through the hundreds of pictures they took and pick the best ones to post on Facebook to brag to their friends about what a wonderful time they were having.

On Facebook they say "pictures or it didn't happen" - which strikes me as odd as today is Sunday and many people are in church reading the Bible which doesn't have any pictures in it.  People are willing to take 2000-year old stories on faith but won't believe that you took a vacation or went to a fancy restaurant, unless you have a photograph of it.

Whether Apple intentionally set out to create an electronic drug is up for debate.  However, I believe that the developers of the smartphone knew at the time they were developing something that had highly addictive properties.  And unlike opiates and other drugs, this new electronic drug is perfectly legal and in fact promoted and regulated by our government.

Granted, it is possible to become addicted to almost anything.  People are addicted to watching television - in fact the majority of Americans are.  Most Americans watch hours every day of television and think nothing of it.  People also become addicted to driving cars, particularly poor people.  As I noted in earlier postings, many people will just get in their car and drive around for "something to do"  Or they spend countless hours in long commutes and think nothing of it - and even admit that they enjoy this private time behind the wheel of this powerful machine, where they are in charge for brief point during the day.

And the nature of these addictions is very consistent.  There is a feedback loop that provides an incremental amount of pleasure to the user so that they keep coming back for more and more over time.  People stay up late watching television, flicking through the channels on their cable box trying to find something good on.  They look up with the clock and realized they've spent two or three hours flashing through dozens of channels watching only snippets of programs - and mostly advertisements.

Cell phones with the same way, but even more so.  There are some people who simply cannot put down their phone, whether they are texting on it, talking on it, or just looking at it.  Whether they are reading emails, going online to find sex partners, or just reading obscure articles on Wikipedia, it becomes a compulsive addiction, and no one, including myself, is immune from it.

I would like to think that I'm not completely addicted to the smartphone at this time.  I usually leave my phone off for most of the day, and leave it sitting on a table when I leave.  It is odd, but we will go into town to go shopping and not bring a cell phone with us.  People act shocked that we would leave the house without a cell phone, however in my lifetime this was a very common occurrence before the cell phone was invented.  Believe it or not, you can actually drive to the store without having to have your cell phone with you.

The problem is, since I am not tethered to my phone 24 hours a day, other people often get very upset with me.  Most other people have their phone in their pocket or in their hand or within easy reach at all times.  They have their cell phone ringer at full volume, whereas I have mine turned off.  So if they try to call or text or email me, I may not receive their message for hours.  They assume that I am screening my calls or intentionally not responding to their messages or emails and then get pissed off because I didn't immediately reply.

This is the new paradigm of the smartphone.  When people send you a text, they expect you to immediately text them back.  Since I don't have texting enabled on my phone at all, this becomes problematic.  People say, "I sent you a text didn't you get it?"  And I reply, "No I don't do texting" -  and they give me a blank stare.

This was driven home to me the other day when a friend called and asked why I hadn't responded to the voicemail message they had left on my phone.  The reason why I hadn't responded was that I had been in town shopping in my phone was sitting on my desk. When I returned home I didn't immediately race to the phone to see if there were any messages, and in fact didn't even look at it for several hours until they called.

To the cell phone addicted, who never leave their phone for even a nanosecond, this is heresy.  My friend all but accused me of screening my calls and intentionally not answering his voicemail.  The idea that I simply wouldn't have my cell phone with me or not be constantly checking it every five seconds for new messages was unfathomable to him.  So once again, I have pissed someone off, simply because I am not part of the herd and don't engage in the herd behavior.  Modern living is so complicated!

What is amazing to me about this is that given that cell phones and smartphones have only existed for a few brief years, that this sort of behavior has become so quickly and heavily ingrained into our society.   People today have new norms of behavior which are shockingly different than those from just a few years ago.  Indeed, Apple has done a very good job of molding our behavior and addicting us to this electronic drug.  They have changed the world, and not always in a better way.  In fact, not very often.
Newer Post Older Post Home