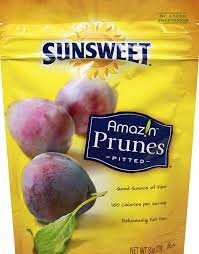 Prunes are fat-free, doncha know!  They are also gluten free!  Who knew that fruit has no grease or bread in it!  Learn something new every day, it seems!


One of the craziest things about American culture is how science turns into pseudoscience and is applied to everyday products.  I was noticing this in a small package of prunes, which stated that, among other things, they were good source of fiber (which is true) but that they were also fat-free.

The struck me as kind of an obvious statement.  Fruit generally doesn't have oil or lard in it.   For that matter, prunes are also gluten-free, in that they don't have any bread in them.  I suppose it wouldn't have hurt if they had also advertised them as being not only vegetarian, but vegan as well.  If you are going to state the obvious, you might as well go whole-hog.  No, there is no meat in prunes.  Funny how that works.

I wrote about this before, how the vegetarian aisle at the Wegmans is more like a candy store, with lots of sugary cereals and even outright candy.  A package of Jolly Ranchers was advertised not only is being vegan, but fat-free as well.  Yes 100% sugar has no fat in it.  That doesn't make it health food.

Of course, this plays into the popular misconception that fat makes you fat.  For some reason, Americans are obsessed with the idea that removing the fat from something somehow makes it healthier.  And this is only the case if it is trans fats, which largely been removed from the American diet.  And ironically, many "healthy" foods of bygone days contained trans fats - such as margarine, which as offered as a low-fat alternative to "unhealthy" butter.

You know what?  Cigarettes are also fat-free, vegan, and also a good source of fiber!  If you ate them.  I don't suggest you do.

I ran into this attitude at a restaurant recently.  Our waitress was confiding that she had bought a fat-free fryer to fry her french fries in.  She said this after I declined the side offer of fries and asked for a side salad instead.  She felt that the "evil part" of the french fries was the vegetable oil they were cooked in.  But the reality is the main problem with french fries is that they are 100% starch which is converted in your body to sugar, which in turn goes right to your fat cells, if you overeat and under-exercise.  It is not the oil, but the high amount of calories in fries - calories your body hoards if they are not used.  The fact that they are dripping with canola oil is really secondary.  And of course, the main problem is they give you a pile of them size of your head which really amounts to about 300 to 500 calories worth of potato- enough to serve an entire family.

But she was convinced, that somehow this food stuff could be made healthier if you just remove the oil, when in fact it was the huge amount of calories that was involved that made it unhealthy.

Granted, if you have cholesterol problems, the fat and oils are also an issue.  But "low fat fries" are not the answer to your health problems, the boring side salad is (sans oily dressing, of course).

But moreover, saying something is "free" of an ingredient doesn't necessarily make it healthier.  Fats and oils are not necessarily unhealthy things in your life unless you consume them to excess, much like anything else.  The same is true for glutens.  Very, very few people are actually allergic to gluten but it's become trendy to say something is gluten-free and people love to make a big deal or fuss about ordering something without gluten in it, much as vegetarians and vegans like to have things made special for them just to be a pain in the ass.

Sadly, one of the ingredients in food that really can be unhealthy for you, particularly large quantities, is sugar.  And for a long time, marketers love to use the words "sugar-free" in selling products.  But of course, the way they achieve "sugar-free" was to use some sort of artificial chemical or sweetener in place of the sugar.  And some of these chemicals have been alleged to be dangerous to humans and have been withdrawn from the market.

Other alternative is to just not put sugar in things to begin with.  As I noted my previous posting about Trader Joe's, for some reason they feel obligated to dump sugar and almost all of their products. They make an excellent hot sauce call Green Dragon hot sauce, or I should say it would be an excellent hot sauce if it didn't have cane sugar as its fifth ingredient.  When you have this hot sauce you think yourself, "Gee, this is a good hot sauce, but it's a little too sweet."  Unfortunately it seems like everything in their store is saturating with sugar, which is better than high fructose corn syrup, I suppose, but why not just leave the sugar out and be done with it?

The same is true for most commercially available tomato sauce as you see in the stores.  They are usually laced with sugar and sickly sweet.  Ironically, sometimes the store brands are the ones that don't have sugar in it, such as some of Walmart's store-brand tomato sauces.  And if you look at the calorie count on the back of the bottle, you see that the calories count correspondingly lower as a result.

You wouldn't think about making a plate of spaghetti and meatballs and then dumping a bunch of Jolly Ranchers into it would you?  I mean that would be disgusting and sick.  But for some reason, the people who make canned tomato sauce think that we want candy and all of our Foods.  And even so-called "progressive" retail outlets like Trader Joe's (which is really just a German supermarket chain gussied up for the American Market) seem to feel likewise.

And it's unfortunate, but this use of misleading labels seems to point out exactly how ignorant Americans are.  If people really need to be told that fruit is fat free or that candy is gluten free or that sawdust is sugar free, one wonders about the level of intellect in our country.

But then again this illustrates how easy it is to make money in this country, as most people are so entirely clueless and moreover believe whatever is convenient to them.
Newer Post Older Post Home