The War On Michaelmas 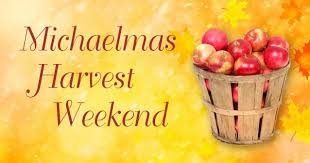 Fox News has spent so much time and effort defending Christmas, but allowed other Christian holidays to be thrown under the bus.


Another Michaelmas has come and gone, and you probably didn't even realize it.  Yes, it was September 29th, just a few days ago.  I forgot about it myself!  Now, all those Michaelmas cards and presents will be days late, and the decorations will probably not go up at all.  Such a shame.

And it need not be so, either!  If only we would take the time to recognize that we are a Christian Nation, at least since 1956 when the national motto was changed from E Pluribus Unum to In God We Trust.   Of course, this was about the same time that "Under God" was added to the "Pledge of Allegiance" as well - all due to controversy about prayer in school at the time (as well as messy things like desegregation and other Godless acts).

Worse yet, holidays like Michaelmas and Flag Day are being ruthlessly exploited by commercial interests.  Look at the poster above - "harvest weekend"???   Am I the only one to know the true meaning of Michaelmas?


Maybe Linus can explain it too us....

And don't get me started on Candlemas!  Fox News is really dropping the ball, here!
Newer Post Older Post Home