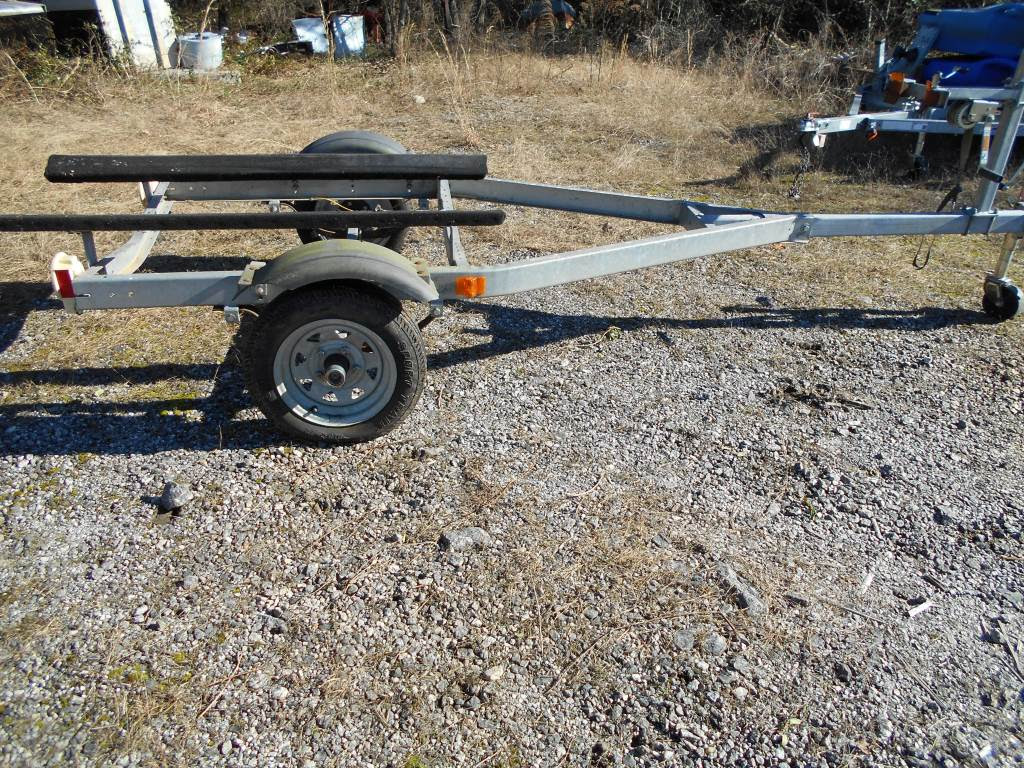 Jet skis burn out after a few years, leaving the trailer to rot in the owner's side yard.  You can buy these cheap and use them as utility trailers, for camping, or to haul a small boat or kayak.  And hey, if you're dumb enough to buy a jet ski, at least save a few bucks buying a used trailer.  Be sure to pack those wheel bearings though!


We were thinking of making some sort of trailer to tow behind the golf cart, so we could take the kayak to the boat ramp.   Hauling it on the truck is OK, but it takes a long time to set up the roof racks and whatnot.   We saw someone hauling their kayak on a small trailer and thought, "why not?"

We found this out by talking to someone at the campground who had a neat trailer to haul his kayak and a box bolted on top with some angle irons to haul all his camping gear, life preservers, etc.  He told us it was a used jet ski trailer he found for $70 at a junk yard.   Good scavenging!

As opposed to.... going out and spending thousands of dollars on brand-new kayaks.  While searching for a cheap used Jet ski trailer, we found this missive on Craigslist in nearby Jacksonville, Florida:

Three Kayaks, Trailer, paddles, life-vests, transporter, storage box, rod storage tubes, rod holders etc. These kayaks and trailer have been stored in a garage and are in excellent condition. Two of the them have only been used twice and the other (140) was a demo model. Just have too much going on to be able to use the kayaks. Would like to sell as a package to someone who wants to get started in a great outdoor activity. Contact me if you would like to take a look.

Ouch.  They spend all this money on brand-new kayaks, a trailer and then use them twice because there is "too much going on" (read:  Watching Fox News 6 hours a day).   You can go kayaking for a lot smaller investment than this, trust me.  Like $200 or so.

But this got me thinking.   A lot of people decide, "We're going to get into Kayaking!" or boating or pottery, or a motorcyle or a hobby car or whatever.  And they go out and buy all brand-new stuff and it languishes in the garage.   We've seen a lot of brand-new kilns, for example, that sit unused and obsolete, over 10 years old, in the owner's garage.  They were going to get into pottery, spend thousands of dollars on equipment, and then lost interest.   And pride prevents them from selling all this brand-new stuff and moving on with life (and learning a valuable life lesson).

We've seen people buy brand-new motorhomes - spending tens if not hundreds of thousands of dollars - and then go camping and decide they hate RVing.   And they sell the rig at a huge loss, or since they are upside-down on the rig, let it rot in the side yard until the loan is paid off.

Or consider my former dental hygienist, who went to a boat show with her husband and bought a boat.  They went out on it once, on a very windy day, and it scared them so much they never used it again.  They failed to winterize it, and the first winter cracked the block.   Nearly a decade later, it sits in the driveway, full of green water, the transom rotted out, and ten hours on the hourmeter.   What a freaking waste!

Yet the middle class does stupid things like this all the time, and then wails that the "1%'ers" took away their money.   And younger people do this too - signing onerous loan agreements to go to party university to get a useless degree in naval gazing and then wondering why there is no six-figure job at the end of the pipeline.   Forgive my loans!  Make college free for everyone!  Guaranteed minimum income!  Tax the rich!  It has to be someone else's fault, right?

I could go out tomorrow and buy a brand-new trailer at a boat store.  I could go to Lowe's and buy one of their "little gay trailers" they have parked out front and pay cash for it.   I choose not to.  Because this is a want more than a need, and the fun part is finding something that someone else discarded and then making something of it.

If all else fails, I think I can make something from some old galvanized steel studs they are throwing away in one of the hotel demolitions, and a couple of used wheelbarrow wheels.   Either way, I'm in no hurry to go out and spend money on a trailer, that's for sure!