Are You A Passive-Aggressive Jerk? (We All Are, At Times!)

How you cross the street says a lot about you as a person.

A lot of us like to think we are nice people.  We don't go around hurting others intentionally or trying to take advantage of others,  even if the situation makes it possible to do so without consequence.  But many people are passive-aggressive jerks, without even realizing it.  And we see this all the time with human behavior, particularly in groups or crowds. And if you were to confront some of these people with their behavior, they would act innocent and wild-eyed and claim they didn't do anything wrong - and in fact they would even believe this themselves.

This was driven home to me recently when I went to the Dollar Tree in the shopping plaza.  It is a common everyday experience in America that that as a pedestrian, you have to cross the street or parking lot, preferably at a crosswalk.  As the old saying goes, a pedestrian is someone who just parked their car.  How you approach this routine transaction either as a pedestrian or motorist says volumes about your character, whether you realize it or not

For example, I was leaving the store and heading to my car, which was in the parking lot across the access road.  Halfway across the road, I realized there was a car coming, so I sped up my pace so as not to inconvenience them.  As a motorist, I realize how inconvenient it is to have to slam on your brakes to avoid hitting a pedestrian.  It just seemed like a matter of common courtesy to speed up my pace in order to get out of their way so we could both get to our destinations in the minimum amount of time and  inconvenience.

Sitting in the car, I watch other people negotiate this transaction with startlingly different results.  For example, one lady saw a car coming and even though she was still on the sidewalk she sped up her pace so as to arrive at the crosswalk at the exact same time the car would, thus forcing the car to stop to let her cross.  If she had merely maintained her existing pace, she would have reached the crosswalk after the car had already passed and neither person would have been inconvenienced.  But instead, she went out of her way to inconvenience another party, simply for the sake of having that minuscule amount of power and control over another.

Of course, some people do just the opposite, in another variation of this sick little game.  For example someone will be crossing the crosswalk and if they maintained their pace, would be through the crosswalk by the time the car went through.  Instead, they slow their pace to a crawl so that the motorist will have to stop at the crosswalk.  Again, they intentionally alter their pace so is to exert some minuscule form of control over others.

This is not only a matter of inconvenience, it also is a matter of personal safety, too.  Many folks cross parking lot or other roads diagonally, which means they spend more time in the road, and are thus more likely to get hit.   It also means they block the road for a greater amount of time - often with a car breathing down their necks as they walk, which they pretend not to notice. 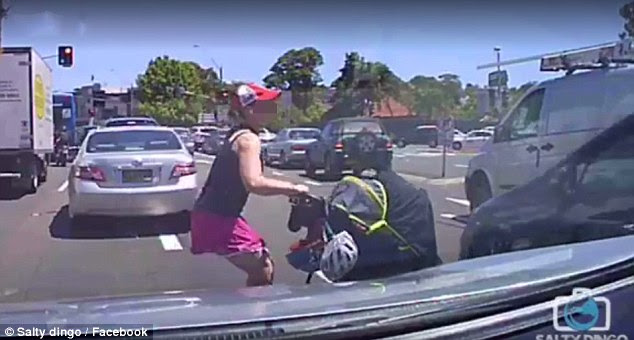 Using your baby as a buffer against traffic just seems wrong to me.

Myself, I try to cross perpendicularly when there are no cars around, and will wait until there is no traffic before I cross - like we were taught in grade school.   Today, it seems, people step out into the road intentionally, to stop traffic and "make a point".   Even worse, some women push baby strollers out in front of speeding cars.   This I simply do not understand.

You also see this sort of behavior with people in groups, whether it is pedestrians the mall or people driving on the road.  People in busy shopping malls and stores will intentionally park themselves at choke points so that everyone is forced to walk around them.  Worse yet, some people walk two or three abreast and meander from side to side of the aisle to make it impossible to get around them. When you finally managed to squeeze past they give you dirty looks as if somehow getting your business done is a horrible aberration whereas their leisurely pace is in God-given inalienable right.

I mentioned before, my friend who was a carpenter who is installing sheetrock in an office building. He was pushing a cart with 12 foot sections of sheetrock on it down a busy Corridor.  There were a number of secretaries chatting and some of them even walking backwards while talking to friends who were walking away.  He stopped dead in the middle of the hallway and they plowed into his cart of sheetrock giving him a dirty look and saying, "Why don't you watch where you're going, Buster?"

I've had the same experience, seeing people not watching where they're going, walking backwards or otherwise distracted - today often with the aid of the smartphone.  I stopped dead in my tracks and remain immobile while they plow into me, and then curse me for bumping into them.   And yes, I've tried to play "dodge 'em" and try to swerve out of their path.  Guess what?  They instinctively swerve into you anyway.  It is just a sick passive-aggressive little game.  Better to remain stationary to absorb the impact.

Of course, there are other sick little games which are less passive and more aggressive, particular with regard to motor vehicles.  On the way back from the Dollar Tree, an ambulance came by with its lights flashing.  As we were taught in driver ed, when an emergency vehicle comes, you slow down and pull over and let the vehicle go by.  Once the vehicle has gone by, you then safely merge back into traffic in the same order that you pulled over.

Then there are people who try to pass in merging lanes and off-ramps.  I've seen this a lot in our travels and it's particularly annoying when you're pulling a trailer. You come to an exit lane and put on your turn signal to change lanes to get to that exit. However the guy behind you has the idea that perhaps he can pull into the lane behind you and then floor it to get around you and pass you in the exit lane.  Again, this is not only unsafe and impolite, it is probably a illegal as well. It's also a good way to cause a wreck.

The common denominator of all these things is of course, the lack of civility in our modern society.  Whether is somebody trying to control the actions of others through passive-aggressive means, or people being overly aggressive in order to "get ahead" at the expense of others, what we have lost is a sense of community and polite behavior.

Of course, the question is, why do people do silly things like this?  And why in fact do we all tend to do this at one time or another?  Again, I think the answer lies in this feeling of powerlessness we have.  As I noted in my culture of belligerence posting, people at the low end of the economic spectrum, who have the least amount of power in their lives, tend to spend the most amount of money on vehicles with loud exhaust pipes, whether they be boats, motorcycles, cars, or monster trucks.

The very poor are also the most likely to spend what little money they have on tattoos, piercings, and outlandish clothes designed to make them look like they just left an armed robbery. The common denominator is a feeling of powerlessness. They may have no power in their personal lives in terms of economic power, power at their job, or even in their marriage or family relationships.  But they can project power through intimidation by being aggressive-looking or aggressive-acting toward others.

Similarly, these examples of passive-aggressive and aggressive behavior I've outlined above are ways for people to feel more empowered in their lives.  They may feel beaten down by the system, but they made some motorist wait for them at the crosswalk.  They may not have anything saved for retirement and are at the mercy of their lenders, but they got ahead of you at the exit ramp.

So what's the point of all this?  The point isn't that people are horrible and rotten and do horrible things.  The point is if you find yourself doing these sorts of things (and we all do, on occasion), ask yourself why.  Because in the end, you realized consciously or subconsciously you were doing them, and it makes you feel bad about yourself.  And even though you may score some minor victory in the parking lot, the crosswalk, the hallway in the mall, or on the interstate off-ramp, you really aren't getting ahead in life doing stuff like this.

We say that people "mellow out" as they get older simply because they are aging.  I think perhaps it is because as we get older, we become more financially secure and feel less of a need to lash out at society or our neighbors.  When people are financially insecure they become more erratic in their behavior.

So maybe the takeaway from this is, to catch yourself at these behaviors and ask yourself why you're doing them.  And maybe put that energy to more productive ends, and it will end up making you more financially secure and less anxious down the road - and the world will be better off overall.
UPDATE:  A reader writes noting another form of this passive aggressive behavior, where people on the subway or in other public places play music, not through their earphones but through the tinny speakers of their smartphone. They are intentionally annoying others with their music in order to generate some sort of reaction. They're desperately hoping somebody will call them out on this so they can have some sort of macho confrontation and assert authority and power. Again this is another form of sickness in our society.
Newer Post Older Post Home