Fear and Loathing at Sam's Club 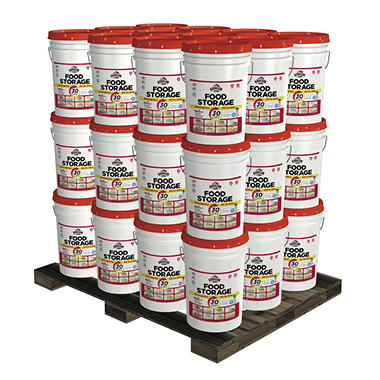 Just what you need - big savings on Armageddon supplies!


I finally had to remove the Sam's Club "app" from my phone.   We went there twice and didn't find many bargains, compared to BJ's.  Sam's Club is like Wal-Mart's weird uncle.   A great place to go if you need 100 hot dogs or 15 pork chops.  They take the "bulk" in bulk buying seriously.

The app keep sending "updates" about "Black Friday Deals!!!" including one last night at 6:00 PM.  They sounded like a desperate bar fly looking to hook up fifteen minutes before closing time.

What turned us off from Sam's Club was the lack of bargains and the confusing layout of the store that seems to favor impulse purchases and end-cap displays.   You want to buy your own bouncy castle and launch your children into space, you can do so.  But a good deal on food and drink?  I find it lacking.

A friend likes to go - a friend who always harps on how much they saved on things, and not what they paid.  And the latest Sam's Club circular caters to this - everything is listed as to how much is "off" the purchase price - but most items don't have the actual price (and the few that do, have it in small letters).  You would have to go to the store to find out the price.  Some bargain.   Even worse is that they put "limit 3 per customer!" as if you are going to go in and buy 100 of them and re-sell them on eBay or something.   They are using fear of shortages or limited availability to sell product.  "Didn't make many Hupmobiles in this color - better buy one now before it's too late!"  Same old, same old.

The weirdest thing they were selling was a pallet of food called the "1-year 4-person food kit" for $1000 off! which was listed online for $2699.   I guess $1699 for a year's worth of "food" isn't a bad deal, if you don't mind eating out of cans for a year.  But since this is "survivalist" food, I suspect that much of it will rust and molder in someone's basement before being thrown out several years from now.  They could put sawdust in the cans and no one would notice, as it never gets eaten.  Hey, after the Apocalypse, who are you going to sue?

I am sorry to disappoint the folks at Sam's Club, who seemed so desperate for my business.  But there were no "black Friday deals" I really wanted to buy - that I could not buy any other time of year.  I already have a flat-screen TeeVee for watching Netflix.  We hardly use it.  Why would I need a new one?   And since I am no longer on the Christmas nightmare train and feel compelled to go into debt every 12 months to buy stuff for other people that they don't want or need, I really have no "Christmas Shopping" to do.

Although, for my favorite survivalist friend, I think I found the perfect gift.....
Newer Post Older Post Home