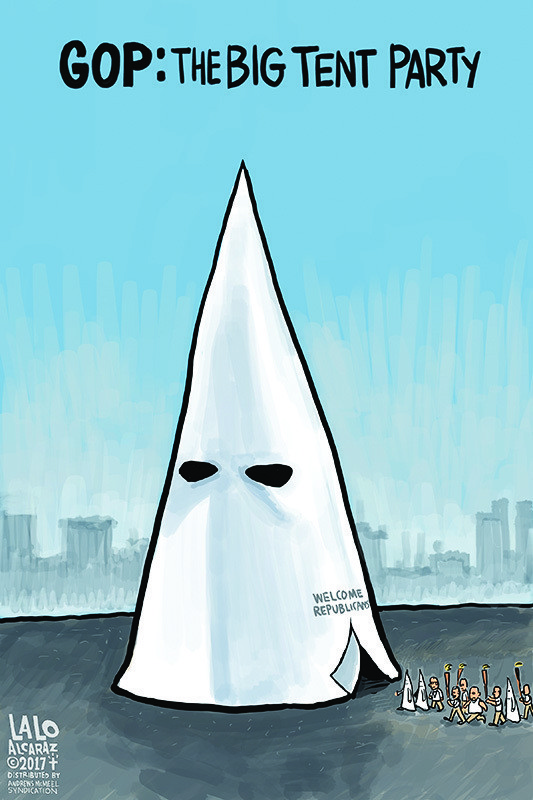 Is the Republican "big tent" becoming too big?

With apologies to Martin Niemöller....

First, Republicans were conservatives in that they espoused conservative fiscal policies such as small government and low taxes.  And I thought to myself, these seem like reasonable policies, and I said nothing.

Then, the "evangelical Christians" started flocking to the party.  Now the Party stood for fiscal conservatism, anti-abortion, "family values", prayer in school, and teaching "creationism" in school as well.   And I thought, maybe this is not such a good thing, but since I wasn't in school and didn't need an abortion, I said nothing.

Then, the "tea partiers" joined the party - demanding that taxes be slashed and the budget be cut to the bone - so that "those people" would have their welfare cut.   And since I wasn't on welfare, I said nothing.

Then the "alt-right" joined the party - demanding that we go back to the "good old days" when women and blacks were subservient.   And since I wasn't a woman or black, I said nothing.

And then Trump joined the party - promising to deport Mexicans and slap import tariffs on imported products and punish companies that moved business overseas.   But I wasn't Mexican, and didn't run an international business, so I said nothing.

And then the white supremacists and the KKK joined the party - and they demanded that Jews and women and blacks be "put in their place" and that we return to our roots as a "Christian Nation".

And I tried to say something, but it was too late.   And there was no one left to speak up for me.

What we are seeing today is an implosion of the Republican Party - a slow-motion death that they brought on themselves.  The GOP has always been a hard-sell to voters as they promise not more welfare and food stamps and minimum wage hikes, but rather self-sacrifice and draconian budgets and small government.   It is like trying to sell spinach to kids when the guy across the street is offering candy for free.   But we all remember what Mom told us about strangers offering candy, right?

So the GOP made unholy alliances with people on the "right" such as evangelicals.   And until about 1979, evangelicals, particularly Baptists, were apolitical, often not bothering even to vote.  The idea of the pulpit, pew, and voting booth being linked was an alien thought.   But then someone realized there was a whole lot of discontentment that could be tapped into.   So they promised to overturn Roe v. Wade, but of course had no intention of doing so.  It was just lip-service to get elected.  The last thing they wanted was a full overturn of that decision - it would cause their "base" to stay home and no longer vote!

But even that "base" of voters wasn't enough - even as their far-right religious views turned off many progressive Republicans (yes, such a thing existed in the 1960's and 1970's - today, Nixon would be considered a "Liberal" for founding the EPA and creating wage/price controls).   Many mainline GOP legislators found themselves in uncomfortable territory, endorsing the teaching of "creationism" in school and other retrograde and ridiculous positions.   But they swallowed their pride and did it, to get re-elected.   But again, it wasn't enough.

So they went after smaller and smaller groups of far-right radicals to get out the vote and get re-elected.  Hold your nose and campaign.  And when a supporter says that Obama was a Muslim, you just nod your head and try to figure out how to spin that later on.  Pretty soon, you are attending hate rallies - which are your campaign rallies - and wondering how you got here.   And wondering if perhaps, you created this.

And so here we are today, with a new "far-right" unabashedly admiring Hitler and pining for the "good old days" when blacks were slaves (slavery wasn't that bad, right?) and the Nazis were in power.  They certainly had snappy uniforms, right?  And the Autobahns - it made it all worthwhile!  A whole generation that slept through history class - or learned their history on YouTube - is now demanding to be heard.

And the GOP, instead of standing for something is now finding they stand for nothing, other than to pander to a "base" (in every sense of the word) and to wealthy donors who want their taxes cut and special favors and contracts.

No wonder the GOP is in a love-fest with the Russians - they want the same style of Oligarchy here as they have in Russia - where the well-connected can take over state industries and become billionaires overnight.

They should, of course, be careful of what they wish for.  Russian billionaires quickly become political prisoners or end up being poisoned or beaten to death, when some other oligarch decides they want a taste of the pie.  Such is the fate of tyrants.

Granted, there are some in the Republican Party who are saying, "enough is enough!" and speaking out.   But the only real action they are taking is quitting the party, which really doesn't accomplish much other than to insure that an even further-right candidate will win the next election.

There was a time in this country when the two parties were more alike than different - and ideological differences weren't something people were willing for fight over - much less kill for.  It seems that time has past already, and the transition was so gradual, taking decades, that we have really failed to notice the changes.

And sadly, it seems the Democratic party is doing the same thing, only in another direction - courting ever smaller minorities of extremist thinking in order to win elections.

Just a crazy idea, but the majority of Americans are pretty middle-of-the-road.   If you are going to pander to someone, why not pander to the clear majority?
Newer Post Older Post Home