Why I Replaced the Ice Maker 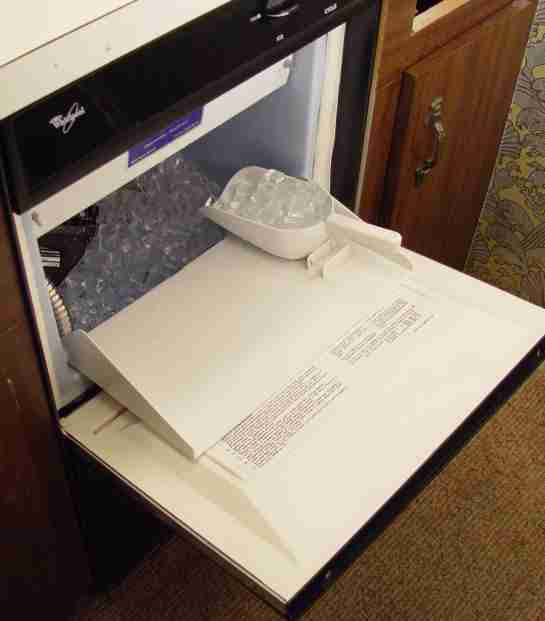 If I was building a house or remodeling from scratch, I doubt I would install an expensive ice maker - or indeed even an inexpensive one.   But if you buy a house that has one, what do you do when it breaks?


A reader gave me a hard time about replacing the ice maker in our house.   It broke and broke bad, and I would have to replace it or decide to do something else.   I figured there were a limited number of options I had:

1.  Leave it broken.   I could just leave it where it was, unplug is and disconnect it from the water line (or even not do that) and have a non-functioning appliance in the house.   Some folks take this route.  The power window in their car breaks, and they decide to live with a window that doesn't go up and down anymore.  Real fun to be behind them at a toll booth.

This is the cheapest option, but when you sell the house (or the car with the broken window) it says volumes about how the previous owner treated the place (or car).   If this is broken, what else is?  And no, saying "you can fix that" doesn't make it right (run away from people selling stuff and saying this).

Plus, it just lends a general air of crappiness to your house (or car, boat or whatever) when stuff is broken.  And over time, you'll have more and more broken stuff, and pretty soon you are living in (or driving) a shit hole.   So this is not an option for me.  I don't "live with" broken things.

2.  Install a cabinet.   I could just take out the ice maker and install a cabinet in its place.  But since the cabinets are custom, this means I can't just buy a matching cabinet at Lowe's and install it myself, but would have to hire a cabinet maker to build and install one, and even then, it would not match and look awkward.

Again, you can patch something together, but this is a house we are talking about, not some trailer hovel.   The other alternative is to rip out the whole bar and install all new cabinets, and start over.  Of course, this means removing the countertop, back splash, cabinets, etc. and staring over, and then re-painting and sheetrock repair and a bit of construction mess.   Lots of labor and probably just as expensive as replacing the ice maker.   And for what?  To get rid of something.

Some folks do this.  The generator fails in their boat, so they tear it out and say, "Pre-wired for a generator" when they sell it, instead of "generator broke, so I threw it overboard".   I guess it is one approach, but again, sort of adds to the crappiness factor, and also isn't saving much money.  In fact, you are spending as much to have less.

3.  Go to a cheaper ice maker.   Again, most "cheaper" ice makers are 15" wide, leaving me with a 3" gap to fill.  Either I have to try my hand at finish carpentry or find someone to fill the gap (a finish carpenter) and pay him to do it.   The price "savings" over the stock unit evaporates quickly, and if the gap-filler isn't done right, it looks like crap.   This also means more effort and work as well.

Cheaper is what you pay for, and reading the reviews of these off-brand ice makers, I realize that many of them might not last even the 12 years the Kitchenaid did.  So am I being penny-wise and pound-foolish?   Also, all of our kitchen appliances match (white, Kitchenaid) and again, this is a house we are talking about and again, the crappiness factor.  Mismatched appliances in different colors of different brands can detract from the perceived value when selling the house.

With the added cost of putting in a patch panel, I am not sure this option is cheaper, either.

4.  Repair the old one.   Sadly, the refrigeration circuit is shot on this one (corrosion ate through one of the copper lines) so it is not feasible, or at least cost-effective to repair.   I found a used one online that "needed work" but it was sold before I could snatch it up.  I could have used the parts from mine to fix that.  But again, appliances last about 10-15 years, and used appliances, like used tires, don't last very long, so while it would have cost less, it wouldn't have given much service.  If I was selling the house next week, maybe.   But we plan on staying here another decade at least (God willing).

5. Buy the exact same damn thing and be done with it.   While this initially seems "more expensive" than the other options, it ends up being on a par with nearly all of them in terms of cost, and in terms of labor and hassle, far less.   Make one phone call, order the damn thing, and they show up and put in back in, and the bar looks like new and we have another 12 years of ice.   No patch panels, no construction zone, no off-brand item for 2/3 the cost (but half the service life) - no worries!

If you look at the decision matrix here, the best option is to try to find a used one to install, which I was almost able to do.   Failing that, the second best option is to just replace it.  Re-doing cabinetry is opening up a whole new can of worms and starting a major construction project.  Leaving dead appliances in the house is not an option for me.   I don't play that way.

Now one reader, who sometimes seems to be trolling me, said, "why not buy bags of ice?  They are only a couple of bucks a bag! and they last a week!"   I am not sure how to parse this.   I would use more than a bag a week, to be sure, and at couple of bucks a bag, we are talking $104 a year, or well over $1200 after 12 years, without the convenience of having ice at hand (buying ice and bringing it home before it melts is problematic).  Like I said, I think he was trolling me.   Lot of that going around these days.

The standard ice maker in the refrigerator, which makes u-shaped pieces of ice is acceptable for most uses, but the ice is cloudy with air bubbles.  By the way, it isn't hard to add one of these ice makers to most standard refrigerators, and they are not very expensive.  We installed one in our condo and it worked well.   As I recall, it was about $50 plus the installation kit (tubing and water tap).   This is obviously the "stingy" option for making ice.   But it isn't clear ice.

It is hard to explain, but "clear ice" works much better for beverages, particularly the shaken  variety.  This is the kind of ice you get at a restaurant.  And yes, ice makers in restaurants are very expensive and break down pretty often.   Again, all that water spraying around leaves deposits.  Having a clear ice machine is a luxury, yes, and again, I would probably not have installed the machine if I was doing the initial remodeling.   But since it's there, well, might as well use it.  And living at the beach, we tend to go through a lot of ice.  Trying to get rid of it is almost as expensive as replacing it.

So I made the decision to replace it.  Of all the alternatives, it was the least hassle and is a "plug and play" solution.   It is like when a part breaks on your car.  You can buy the standard replacement part and know it will fit and give good years of service, or try to use some fancy aftermarket part that will cost you more, have fitment problems, and perhaps not even last as long.   Just stick with stock, we know it fits, and we know it works.


UPDATE:  A reader writes that I should have just left the dead ice maker in place or "just put in some shelves or something" which I might have done in a lesser home.   But this is a half-million-dollar vacation home on a resort island, not a college dorm room.   Also, although we plan on moving from here eventually, you never know when you may have to move.  So leaving a gaping hole in the cabinet isn't really "saving money" as we'd have to either replace the icemaker or put a new cabinet in before selling the house.   A house with a lot of broken crap in it is not going to command a very good price.
Newer Post Older Post Home