Give Money While Living or Leave It In Your Will? 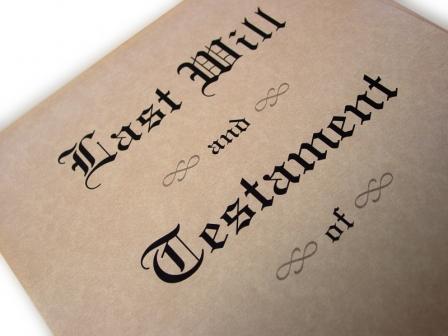 Should you donate to charity or give money to your kids while alive, or wait until you are dead and leave it in your will?   I suggest the latter.


A recent article in Marketwatch, illustrates the pitfalls of giving money to your kids while you are alive - they might not spend it very wisely.  The author of the letter laments that he gives $150 a month to his son, and his daughter-in-law donates it to their evangelical church as a "tithing".   Since the Father is Jewish, this is probably especially galling.

$150 a month might not seem like "a lot" of money, but invested over a 45-year working life at an average rate of return of 7% in the stock market, would yield $2,293,138.22 in your IRA.  The Dad in the article laments his son has nothing saved for retirement, while his spendthrift wife gives away the $7500 every year to some odious evangelical church.   Dad should stop pissing his money away on spendthrift son and his idiot wife.

Just to re-cap:  God doesn't need or want your money, and no, "tithing" isn't a thing in the Bible, but rather a made-up construct of the 20th Century by greedy mega-church ministers.   And no, "the end times" theology isn't in there, either, that is also a new thing.   The Bible has so much stuff in it, you can create whole new theologies out of it, if you have an evil bent and a creative mind.   But then again, that's why we have so many different brands of Christianity.  And we're not alone in this - every other religion has its different schisms as well.  But I digress.

The point is, God wants you to make sure you take care of yourself and your family.  He doesn't want cathedrals and stained glass windows.   He has enough of that.  So keep your money, it isn't "selfish" it is self-preservation - and not being a burden to the rest of society.   If you want to donate to the church, put that in your will and odds are, you will end up giving more to the church as a result.  But we'll get to that later.

This article got me to thinking, why is Dad handing out money in the first place?  It seems to me a foolish thing to do.   But a lot of Dads do this, and I think having control and feeling like a big-shot is part of the deal.  The article mentions that Dad laments the "empty chairs at the kitchen table" and that is a big clue right there.  Older parents often dole out small amounts of money to their children, in order to get them to call, write, and come visit. It is a form of control, and when you get older, you don't have much control anymore, once you are retired and the kids move away.  It sounds sick, sad, and pathetic, but we see it firsthand in many families, here on retirement island.   If your kids don't like you, odds are, you can't buy their affection at this point in your life.  But again, I digress.

Now granted, there are tax advantages if you are really, really rich, to handing out cash to your kids.  The Gifts and Estate tax, back in the day, had fairly low exemptions - like about $750,000 or so, which could be combined to $1.5 Million for a married couple.  Anything above that was taxed, pretty heavily, when you died.

There was a loophole, though.  You could transfer about $15,000 or so every year to each child, tax-free (to donor and recipient).   So a lot of wealthy people did just that.  Of course, the problem is, some kids just spend the money on drugs or fancy cars and just waste it.   Giving money to young adults is always problematic - which is why often wills and trusts don't allow youngsters access to their inheritance until age 26 or so.   But more on that later as well.

In recent years, the limit on the Gifts and Estate tax has been raised to about $5 Million, so most of us don't have to worry about paying the "death tax" and if the new tax plan goes through, it will disappear entirely, which Billionaires will be happy about.   So the whole reason for inter-vivos transfers really has evaporated - other than a sick desire to control your children, that is.

But of course, inheritances are problematic, as I have noted before.  But the problem rests with the heirs, not you, as you will be dead at that point.   But it strikes me that if you really want to give money to your children, or donate to your church or other charity, a better approach might be a will or trust or other mechanism to leave the money to them after you die.

Why is this a better approach?

1.  You may run out of money.   If you give away money to your church, your children, or charity, you may run out later on in life and end up broke and destitute.  And at that point, your children, your church, and your charity aren't going to give it back.   And you laugh, this happened to some friends of mine, who squandered huge amounts of money on "tithing" until they were nearly broke, at which point, the church showed them the door.   Religion sucks, really.

2.  You can leave more.   If you fritter away $7500 a year in donations, you end up leaving less to the charity, children, or church, in the long run, as the miracle of compound interest is working against you.   On the other hand, if you leave your estate to the charity/children/church, it could be a sizable six- or seven-figure number.    For the charity or church, you might end up with your name on a building, or at least a scholarship, or maybe a pew.   And please, don't act like you gave to charity with no thought of recognition for your efforts!

3.  The kids will be older.   My Dad recently passed, and it was thrust upon me to divide up the assets in my Mother's small trust account.   Some of this money went to my niece and nephews.   They were at an age today where they needed the money for down payments on a house, funding their own retirement, investing in a business, or providing a college fund for their children.   Since the money was given to them when they were older, they were more responsible in how they spent it.   If they were handed this money, $150 a month at a time, when they were younger, no doubt it would have been spent on beer, pot, and car payments.   And I am not taking a piss on them here, I would have done the same thing at that age as well.   And in fact, the same is true for me and my siblings - all in our 50's or 60's.   If we had been given this money at age 40, it might have gone to pay credit card bills.  Today, well, we are in retirement mode, and it goes right into the bank.

4.  You can set up a Medicaid Trust:  One aspect of getting older is the prospect of living in a nursing home, which can cost tens of thousands of dollars a month.   If you set up a trust, you can leave the money to your children/church/charity and still have limited access to it - but not have it counted against you for purposes of medicaid.  Of course this has to be done, just right.   Now, some may find this idea unethical, but I leave that up to you to decide.

The downside, as I have noted before, is that a will can be challenged, or the executor of the estate can loot it or subvert your wishes and intentions.  But then again, you're dead, so who cares?

I regularly get entreaties from my former prep school (that I was thrown out of) and my various alma maters asking me to write them into my will.   I also get similar pleas from the Frank Lloyd Wright foundation, the National Trust for Historic Places, and of course, even NPR - which makes a pitch every morning (fat chance, People's Radio!  Not after what I've read about "Cokie" Roberts!).

And quite frankly, that seems like a much better option than donating to any of these groups in my lifetime - as I may end up needing the money later on in life.