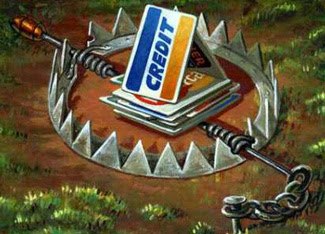 How many credit cards do you really need?  And how much credit?

Businesses make more money today from financially ruining their customers that they do from a healthy long-term relationship.  The car dealer doesn't want you to show up and buy a car with a check, but have you finance over seven years, tacking on extended warranties and other junk add-ons, so you are perpetually in debt.  Similarly, the credit card company will continue to increase your line of credit until it is in the tens of thousands of dollars, at fuck-you interest rates.   If you ever ran up your credit card to the limit, you will spend the rest of your life paying it off.   And they count on a substantial number of their customers selling themselves into debt-slavery this way.

As I noted in my 10 Rules for Credit Cards posting, you have to keep your credit limits low - to an amount high enough to cover your monthly purchases, but low enough to be paid off in one month, easily.   If you are going over this limit, something is very, very wrong with your finances.   If you are just starting out, a low-rate card is necessary.   Rewards are fine and all, but if you don't have any "rainy day" fund, your credit card ends up being just that - and at a high interest rate, you'll have no way of paying it off, if you have an emergency and need to charge something.

When you get to be an old fart like me, and pay off your credit card daily with cash from your savings, and are debt-free, then maybe you can reap these "rewards" cards - cash, only, please, no "miles" or "bonus points".   But most Americans are not in a position to do that, and a rewards card, with an interest rate of 15-25% is a loaded handgun, pointed at your head.

Banks seem so friendly - and full of good advice!  They send you a letter "congratulating" you for being so financially astute (even though your credit card balance hasn't been to zero in over three years) and announce they are "rewarding" you by increasing your credit limit.   As I noted before, you have to call them and ask them to stop doing this - they will do it anyway - and ask them to lower your limit to something more reasonable.

In addition, they will send you letters "congratulating" you for being so successful and all, and telling you that you are "pre-approved" for a credit card.   In the old days, they would just send you the card, and open an account in your name.   Today, that is illegal.    But I did receive, recently, a PayPal "Business Debit" card, that I don't recall asking for.    I cut the card up into little pieces and went on my PayPal account and cancelled the card.   Just what I need - another fucking card to keep track of.

By the way, did you notice how on eBay, when you click on "order now" it doesn't send you off to the PayPal site anymore, but immediately charges your PayPal account?  Perhaps more convenient, but a little disturbing.   Sometimes it is better when it is a hassle to spend money.  Also, I like to chose what means I am using to pay with (paypal balance, checking account, credit card, etc).   But I digress.

This PayPal debit card arriving in the mail made me realize that I have let credit limits creep up on my credit cards - and perhaps I have too many credit cards.   I opened a "rewards" card for Mark last Spring, as they gave us a $200 bonus if we spend a small amount of money in three months, which we did.   I was able to "steal the cheese" because I paid off the balance daily.   As a Capital One card, it has no foreign transaction fees when being used in Canada, so we keep that as our Canadian credit card.

The other reason I opened the account is that I realized that most of our credit was opened up in my name, with Mark listed as an account user.   As a result, if I die (when I die) Mark would have little credit in his name alone, and accounts where I am the primary account holder would have to be closed.   This happens to wives a lot - and we see it here on Old People Island.   The husband dies, and the wife is chagrined to find out that all his credit cards are cancelled and the car loan is now due in full.   Another reason to be debt-free in retirement.

Credit Cards are hard to get away from in our society.  You want to travel, buy a plane ticket, rent a car, stay in a hotel room - these are all things difficult to do without a credit card, or at least a small hassle.  So it pays to have at least one.  Actually, it pays to have two - in case one is stolen while you travel, you have a backup card to use (which you put somewhere else besides your wallet!).

And if you can handle the "rewards" card - and few can - it still pays to have that low-rate card as a backup.  But in both cases, keep the credit limits low - low enough where you can pay them off in one month, if you had to.   If you need to use a credit card as an "emergency fund", have a low-rate card to use for this.  You might have a shot at paying off a 7.5% card, you will never pay off a 22% card, unless you roll it over into a home equity loan - and again, your friendly bank will recommend this.   Nice folks, those bankers!  They always have your best interest at heart - no pun intended.

But this PayPal debit card thing got me to thinking.  I need to go through my accounts and see what the credit limits are - and they have crept up over time.   I need to call the Banks on Monday and have them cut back.    And I need to think about maybe closing one or more accounts.   Having a lot of open credit card accounts is a dangerous temptation.   They are also a nuisance to keep track of, and you should keep track of them daily - and know your closing date, your interest rate, your credit limit, your balance, the payment due date, and so on and so forth.  Sounds pretty obvious, but when I started this blog, I didn't know any of these things or really understood how credit cards work.  You can be really smart and financially illiterate.  And financial lessons are the hardest and most painful to learn.

My experience, in my 30's and 40's was not unlike that being seen today by today's younger generation.  I was making good money, but it seemed that most of it went right out the door, in the form of mortgage payments and debt service - student loans and credit cards being the perpetual debts I could never seem to get rid of.  And helpful bankers offered to refinance these debts with home equity loans!  I stupidly did this, and also had high-interest-rate "rewards" cards that had high limits.  I was a freaking moron.  Same shit, different generation.

But no one put a gun to my head and made me do this.  These debts didn't "just happen" to me.  I did not "inherit" them from someone (indeed, that is impossible to do, or at least very hard).   It was something I voluntarily decided to do, and I realized (after much weeping) that the only way out was to man up to it and pay these debts down - which meant cutting back on a lifestyle that was not supported by my income.  And this is how 90% of us get into debt problems.  The only way out is to live on less, cut back and spend less and pay down debts.  But no one wants to do that.   Cut cable TV?  Then how would you find out about these marvelous deals the banks are offering, or the great "sales" going on at the mall or the car dealer?  That's where astute people save money!

And that right there was one reason why I fell into this trap.  Inside my head was a nagging voice saying that debt was bad, and frivolous debt the worst of all.  But that voice was shouted down by four hours a day of television, which promoted a new rewards card as a "smart financial move!" and all my neighbors in Foreclosure Mews Estates crowed at the backyard barbecue about what a great deal they got on a cash-out "re-fi" that allowed them to buy a new SUV.   Cheeseburgers and cars, financed over 30 years.  And we were all smart, college-educated people, too.   Oh, well.

But what about real financial emergencies?   Sometimes they do exist, but using a credit card to pay for them is often a bad idea.   If you put a huge medical bill on a credit card, you no longer owe the hospital, but the credit card company.   And the credit card company isn't going to negotiate that debt.  The hospital, on the other hand, might - if you dangle the prospect of bankruptcy before them.  They might also back down on a lot of billed items - their billing systems are arcane and obsolete and often a lot of what is charged is just nonsense.  You have leverage with them, as a debtor.  You don't with VISA or MasterCard.

Similarly, the dreaded "expensive transmission repair" which is dangled out as a phantom by the extended warranty people, seems like an insurmountable expense.   Before you throw thousands of dollars at a used car, however, check out the resale value on it.  There is no point in putting a rebuilt or used transmission in a car worth only a few thousand dollars - the repair bill exceeds the value of the vehicle.   You might be better off buying a new or used car (and get a better interest rate to boot) than to throw money at an end-of-life vehicle.  And usually, things like engines and transmissions don't fail until the of a vehicle's life, unless you buy a CVT transmission, or a dual dry-clutch automatic, both of which seem to be problematic these days.

A lot of other things which people claim are "emergencies" in their lives are, in reality, predictable expenses.   For example, your hot water heater blows out and floods the garage.  An unexpected repair, right?   Well, yes, except that it was 15 years old, and you saw water leaking from it for the past eight months.   It was time and you should budget to replace every appliance in your home about every 15 years.  Roofs are a similar deal - there is no such thing as a roof that "suddenly" needs to be replaced - you can see the symptoms of a failing roof years in advance, and again, depending on the quality of shingles used, expect to replace one every 15-20 years or so (unless you have a metal roof).

This is why it is a good idea to pay down these debts and start saving money.   So long as you live the debt lifestyle, more and more debts will accumulate.  And each new expense will seem to be a "surprise" and the only way to deal with them is to pile on more debt.  The money you spend on interest alone, could fund your retirement and certainly pay for those "unexpected" repairs.  Instead, it goes to a bank.
Newer Post Older Post Home