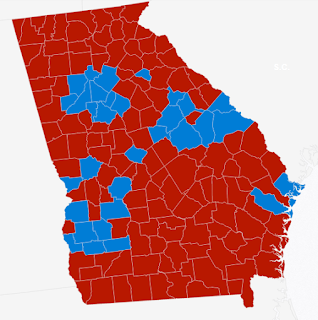 Georgia could turn to a blue State, for the right candidate.

I noted before the Georgia really is not a red State but more of a purple State. Hillary Clinton won 45% of the vote during the last presidential election.  That's pretty close to winning.  If more black voters felt their vote counted, instead of staying home, she could have won Georgia, and the White House.  And it goes without saying that perhaps if her husband was running instead of her, he might have won. But of course, that would be impossible.

I am not sure she would have been a good President, in retrospect - not that the alternative is any better.  Far be it!   But her behavior after losing was anything but graceful, and even today she grouses that the election was illegitimate and that she should have won.   You need to go away now, Madam President.   Like an errant Kennedy cousin, you are not helping the legacy any.
Even if she had won, her every move would have been blocked by a Republican House and Senate, who would have obtained even stronger majorities in the mid-terms.   It would be a pretty hopeless situation.  And I am not sure she would have handled the various issues at hand very well - or that the outcomes would be any different.

The point is, she almost won, and she was a deeply flawed candidate.  If the Democrats put up a better candidate, they could have taken even Georgia, and won.  But they chose instead to go with "it's my turn" and the Crazy Uncle Bernie Show - which is now in re-runs.

This time around, it seems they've gone off the rails entirely.   Sure, ideas like free this and that and everything might have currency in blue States - but those are States the Democrats are going to win, anyway. Why pander to California and New York? The real "swing States" are not going to be too enthusiastic about socialism or outright communism or wealth taxes or whatever.

You can argue all day long that the electoral college is "unfair" and should be abolished.   It won't be - not by the 2020 election, nor thereafter. Throwing a hissey fit over the electoral college is akin to upsetting the Monopoly playing board when you land on Boardwalk, and your opponent has a hotel on it. The game is rigged!  It is unfair!  Let's just abolish the game!

Or... you can play the game to win.  People have won with a hotel on Marvin Gardens - it's been done. But you have to work your strategies and play the rules of the game, instead of making up new rules, like "free parking".  I am sure the "free parking" jackpot rule is quite popular in California.

A lot of people thought Joe Biden was the moderate candidate who could turn Indiana, Ohio, Michigan, and maybe even Georgia, into blue States.  And maybe he can.  Sadly, it seems his time in the sun has come and gone.  There is no "there" there with this Ukrainian thing - which a Trump scandal, not a Biden scandal.  But Trump is expert in taking his own scandals and turning them on his opponents. "Fake News" started out as Breitbart, but Trump turned it into an epithet he throws at the "legitimate press" which obliged him by turning itself into a left-wing version of Breitbart, perversely making his accusations more accurate.

The problem is not the electoral college - it works as it was designed to work, and it isn't going to go away by wishing for it to go.  Constitutional amendments are hard to come by, and the very States that would be disenfranchised by going to a popular vote are the States who will vote down such an amendment.   Ain't.  Gonna.  Happen.   So just get over that.

The problem is the primary system.  Everyone is falling all over themselves to go radical Left, so they can win the hearts and minds of the far-left caucus-goers who will dominate the Iowa caucuses.  If they can win Iowa, and gain "momentum" then maybe they can win New Hampshire. All this far-Left posturing, however, is scaring the crap out of the very voters the Democrats really need in order to win the Presidency - those mid-west voters whose electoral college votes will turn the tide.

Like I said, my vote probably won't count.   In Georgia, it is almost pointless to vote, except in the primaries - the Republican primaries.  The Democratic primaries are usually unopposed - it is hard to get even one Democrat to run for some offices. Many times, incumbents run unopposed - there is no Democrat on the ballot at all! In the Republican primaries, however, you do have a choice between the radical far-right tea party jackass, and the middle-of-the-road conservative jackass. You can select your jackass, who will then go on to win the general election in a landslide.

But lately, the elections are getting closer and closer, and Atlanta is to Georgia as New York City is to New York State - or as Northern Virginia is to Virginia.  The population of the cities can overwhelm the votes from more conservative rural areas.  That being said, even in Atlanta, a lot of this socialism crap simply doesn't sell.  And if you want to win Atlanta, you need to win the black vote, and few, if any, of the Democratic candidates seem to appeal to black voters - even the black and brown candidates.

Like I said before, I think the Democrats want to lose, this time around, so that when the global recession kicks in (coming soon - very soon - to a market near you) they can say, "I told you so!" and maybe free money and free socialism will seem like a reasonable alternative to massive layoffs.   It will seem like it, anyway.

What sort of candidate could win? Well a winner, for starts. No more Beto-losers, please.  No more "I coulda won, but the game was unfair" crap. And no more one-term congressmen or even Senators.  And please, no "businessmen" - we've seen how that plays out.

Governors are the best source for Presidents.  Preferably a governor from a midwest or Southern State (sorry, Mr. Cuomo, you're a jerk, anyway).   A successful governor, serving more than a year or two would be essential - someone who could point to a record of success in office, not abject failure. No crime-ridden States or coastal enclaves.  That takes out people like Ed Lamont of Connecticut - a crime-ridden corrupt State that is losing money, losing people, and losing businesses.

Sadly, looking through the crop of Democratic Governors, it seems that either they are from run-down States with high taxes (New York, New Jersey, California, Connecticut, etc.) or are from run-down rustbelt States. Not sure that anyone from Louisiana should ever run for President - again, corruption. Louisiana stubbornly refuses to join its Southern brethren in economic growth and in attracting industry, outside of oil and hot sauce.  Anyone with even a hint of scandal is out of the running as well.  Sorry, Ralph - the blackface thing, remember?

So who does that leave?   My candidate for 2024:  Lolo M Moliga, governor of American Samoa.  Good luck to the Republicans trying to dig up the dirt on him!  The man is a blank slate!