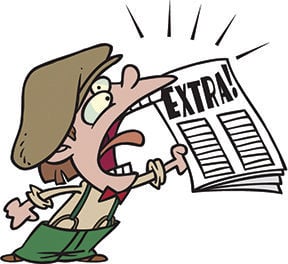 Two news articles appear on the same day, each saying the opposite thing.  Which one is right?

I nearly fell out of my chair laughing this morning when I saw two news articles, almost next to each other on MSN Money.  The first claims that housing construction has "tumbled" from a 12 year high, implying that the housing market is imploding.  The second article proclaims that home builders haven't been this optimistic since 2018, implying that the housing market is going up.

Well, chances are both articles are right, and wrong.  The first article is measuring the number of housing starts, which is an indication of the overall health of the Housing Industry.  Overall housing starts dropped by 9.4%, but single-family home construction continues to increase. This is sort of mixed news, and might reflect the fact that multi-unit dwellings have been overbuilt in recent years.  As I noted before, in Florida there was a mini boom in apartment construction in the last five years, with new apartment buildings going up right and left.  Perhaps this trend has cooled off.

And homebuilders perhaps have every right to be confident because interest rates are at all-time lows, which means that people can pay more for homes and will pay more for homes which means more profit for homebuilders.  Of course, home builders were very confident right before the market crash of 2008 as well.  They only build the homes, they don't have to pick up the pieces when it all comes apart.  The title of the article is a little misleading, too.  Homebuilders haven't been this confident since 2018 - which was less than a year ago.  In other words, their confidence level is about unchanged over the last year.  Not as good a clickbait title, is it?

While there were some smaller builders who were negatively affected by the market crash in 2007, many of the larger home builders survived that downturn.  Most of their employees are not full-time, but rather hired as contractors. They act only as a general contractor and when times are slack, they can easily lay off people and cut their overhead costs significantly and wait out the downturn, sitting quietly, counting their stacks of money.

So long as they're not sitting on an inventory of unsold homes, they don't have any debt issues to worry about.  So no wonder they feel confident.

For homeowners, the same might not be true. While we are in an era of record-low mortgage interest rates, this doesn't necessarily mean that housing is a good bargain at the present time.  It might be a good time to refinance if you have a mortgage that's 5% or higher, provided they don't ladle on too many junk fees and you aren't taking out cash or increasing the length of your loan.  If you can resist the urge to use your house to pay off credit cards or buy a new car, and your new loan has a term equal to or shorter than the existing loan, you can lower your monthly payment and thus save money - or even pay off the loan sooner.

But if you're buying a house, you could find yourself in a bit of a pickle if interest rates start to climb back up. And quite frankly with the rates they are today, I can see no place for them to go except up.  Well, that is unless we end up like the people in Norway with negative interest mortgages.

Whoa.  What just happened here?  A change of interest rates by 1% and a difference of only about $140 a month in payments ends up changing the amount you can finance by over 10%!

And that is the problem with the 30-year mortgage, or any long-term commitment.  You can sell someone a fancy pickup truck if you finance it over seven years - or a motorhome over 20 - by arguing that it is just "a few more dollars a month" when the overall amount is much higher.  As I have noted time and time again in this blog, one way to really analyze a financial deal is by analyzing the overall costs - how it affects your net worth.   Looking at only monthly payment is short-sighted.

The meltdown in Florida in 2008 was a perfect storm (if you'll pardon the pun) of rising insurance rates due to 1-2-3 hurricanes, as well as increasing tax rates (re-assessments don't appear for a year or so after you buy - and they are steep!) and re-setting of interest rates on funny money mortgages.   Suddenly, a condo or house that was "affordable" in terms of monthly payments, is unaffordable.  And as the market melted down, the funny money went away, leaving a very small pool of buyers with cash - and the rest is history.

The same could happen again, perhaps on a smaller scale, if interest rates go up.  You have to hope that the potential buyer has more money to spend on your house and that wages have gone up in the interim.  If not, then it will be much harder to sell your house because most people buy their houses based on monthly payment (what they can afford from their paycheck) not an overall cost (which isn't realized until you sell later on).

So, is buying a house right now a good idea or a bad idea?

Again, that depends.   Right now, interest rates are at an all-time low and don't seem like they can go any lower.  Then again, I said that last year.  Growing up in the era of 6% mortgages and coming of age in the era of 14% mortgages (and I have had rates as high as 11-5/8%, personally, and many in the 8-11% range over the years) it doesn't seem real that you can get a mortgage for under 5% these days, much less 4%.

I think you have to look at a number of factors:

1.  Does it cost less to rent than to buy?   If so, why buy?   Why pay extra for the privilege of paying for repairs, mowing lawns, and unclogging toilets?   When it costs more to buy than rent, usually it is a sign of an overheated market.

2.  Do you plan on staying?   Given that real estate agents want a 6% commission (something that is changing) and the local governments want recording fees, banks want points and closing fees, and so on and so forth, it can cost thousands of dollars in transaction costs when you buy and then later on, sell, your house.  If you are only staying in one place for a few years, whatever little in appreciation you make on the house will be wiped out by these transaction costs.  The old real estate rule-of-thumb is still true:  If you are not staying for at least five years, maybe it isn't such a hot idea.

3.  Are you in a bubble market?   This is harder to realize, as when you are in the bubble, it is harder to see out than for others to see in.  In Northern Virginia in the late 1980's, we saw price increases in the double-digits for several years in a row.  In South Florida in the 2000's, we saw the same thing.   Double-digit price increases generally are not sustainable forever - particularly increases on the order of 20-30% that we saw (and are seeing or were seeing recently) in some markets. You can't increase the price of houses at a rate faster than the rate of increase of wages, or the rate of inflation.  Eventually something has to give - the system either corrects itself or blows up, or both.

4.  Can you afford it?  Many people complain that housing costs take up too much of their income, and many banks who loan them the money, oddly agree.  If your debt servicing exceeds 30% of your income, they consider that financial stress. That is not a hard number to achieve these days, in many markets.  It may be tempting to "jump in" to a hot market "before you are priced out!" as agents like to say, but the people who are hurt the hardest are the ones who bought just before the bubble burst, and a year later are struggling to make payments on a house worth less than the balance on the loan.

The problem, as I see it, is that the current administration wants to push off any recession until after the 2020 election.  They are doing this by "juicing" the economy - by lowering interest rates and lowering taxes, and through deficit spending, three things which act as stimulus to the economy.  Oddly enough, these are the sort of things Democrats are often criticized for as well.  But in 2009, the economy needed stimulus, and the GOP tried to tamp it down to embarrass Obama - resulting in eight years of low but steady growth.

Of course, some would argue that the economy could grow indefinitely, but that sort of talk is just nonsense - but expect people to start believing it, perhaps by early 2020, when the market continues to go up, in spite of the warning signs.  And the idea of infinite growth will be another one of those warning signs.

Eventually, interest rates will recover to historical levels, at which point, the overpriced house in a bubble market - financed at low interest rates - may go down in value.   If you are staying there and can afford the monthly payments, fine.  But if you are in a situation where you have to sell - for example, losing your job at that "tech that is not tech" company when people realize that renting out office space or delivering pizzas is not all that profitable - nor it is technology - you may be in a bit of a pickle.

I made a lot of money in real estate - over a million dollars.  I have a lot of friends who lost, in some cases, just as much.   When things sound too-good-to-be-true, I get very, very nervous.
Newer Post Older Post Home