Flammable Cupcakes And Other Things 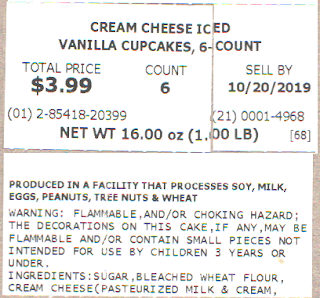 I was surprised there was not a California Proposition 65 Warning as well.


I was at a friend's house last night, and they served cupcakes for dessert.  I laughed out loud when I read the warning - apparently warning me my cupcake was about to spontaneously combust.  I  re-read it and realized it was warning about a "decoration, if any" that was flammable, and realized the dangerous instrumentality they were trying to warn me about was birthday candles.

Note also, the de rigeur allergy warning.   It is a crazy, litigious world we live in, and quite frankly, if I was selling food or running a restaurant or doing anything involving the public, I would put a Proposition 65 warning on everything, an allergy warning, choking hazard, etc. and of course never, ever, ever claim that something was Kosher, Halal, Vegan, or even Vegetarian.   You do that, and if someone drips a drop of pork fat into your Halal Vegan Salad, you'll be sued out of existence for "poisoning" someone.  Pork sausage roll.  Hmmmm..... that sounds really good right about now.

I guess a vegan sausage roll would be good, too, provided it was made of 100% Vegans.  Yes, I am a carnivore, and if stranded in the Andes after a plane crash, I would probably gain weight.   Hello, Clarice.

Sadly, that is the only real effect of this litigation - it makes a few lawyers wealthy (and maybe a pittance is thrown to the named litigants) and then everyone puts warning labels on things, and no one else can sue after that.   Pretty soon, the warning labels stack up, and no one pays attention to them.   Has there ever been a product you've returned to the store once you've opened it up and found a California Proposition 65 warning on it?  Of course not.   The idea that people are "choosing" less cancerous products as a result of this proposition is ludicrous.  The idea that the products in question cause cancer, even moreso.

Almost anything can be deemed a vector for cancer.  But some are more important than others.  Steve McQueen died of mesothelioma, a cancer that is directly caused by inhaling asbestos fibers.  He used to race with an asbestos scarf around his face, which was thought to help a driver survive a fiery crash.  That's dangerous. On the other hand, the hall tree I bought for the garage from Wayfair (which we used to put on our shoes and store hats) isn't that great a cancer risk.  Yes, the adhesives they use in the making of melamine-coated particle board will "outgas" for a month or two.   No, unless you grind it up and snort it, it isn't going to kill you - any more than a host of other things in your life.

And that is the problem with crying wolf - we tend to disregard these specious warnings about exploding cupcakes, because they are so stupid.  And we risk missing real warnings about real dangerous products in our lives.

There was a situation at an ICE center in Rhode Island, of all places, where protesters were "Run over by a Truck" - which was interesting, as the title of the piece changed over a period of several hours.  It started as "protesters injured" and "protesters pepper-sprayed" and morphed into "rammed" or "plowed into" by a pickup truck, and later, just a truck (which sounds like an 18-wheeler).   I posted a piece on it, but then put it in "draft" mode, as I wanted to hear what the real story was, and update it.

I never found out what happened.   I searched online again and again, and every "news story" that Google lets me see is dated within three days of the incident, and has the same word-for-word wire service paragraphs. All except one of the "injured" taken to hospital were injured by pepper spray because they were blocking the entrance to the facility.  The one 65-year-old man who was really injured, had a broken leg and "internal bleeding" - which could mean a number of things, including a broken leg.   The driver of the truck resigned from ICE the next day.

That's it.  No follow-up.  No statement from ICE, no court case, no lawsuit, no nothing.   The only "facts" of the story are "facts" presented by the protesters.   Was this guy run over?  Or did he merely fall down and break his leg (this happens to older people, all the time)?  So what actually happened, I will never know.  Maybe it is the way the protesters said it happened.  But their use of alarming language (equating being pepper-sprayed with a broken leg as an "injury") plus the curious lack of follow-up articles (one would think if he was run over this would be an outrage on the level of Charlottesville) leads me to believe that the protesters are spinning this.  I guess no one had their cell phone on when it happened, either.

The other curious one-sided story is about a group of British people who swerved to avoid a deer and ended up in the United States.   Again, this sounds curious.  I could see how you can swerve into a ditch, but not into another country.  They said they took a "wrong turn" but the Customs people have a grainy video showing them "slowly and deliberately" crossing a ditch and driving into the US.  Inside the vehicle is a couple (in addition to the British couple interviewed) whose names are not given, who were "previously denied entry into the United States" along with $16,000 cash, and some marijuana.  They try to return them to Canada, and Canada says "No Thanks!"  Again, a lot of unanswered questions here, and the media seems to oddly lack curiosity.   But then again, they want you to click on the story about how awful the USA is, and how these folks were forced to sleep in a cold cell or something like that, before being deported.

Again, taking the word of someone who is outraged is never a good idea.  There is another side to the story here, but no one is talking about it.  You can't cross the border with more than $10,000 in cash - and why would you?  We were gone for several months this summer, and brought only $3000 in cash with us (and came back with about $1000 of it).   And why didn't Canada want them back?  And why where two of the people previously denied entry into the US?   You can use your imagination and connect the dots here.   But what is likely is there is another side to the story.  And the video, well, that looks pretty deliberate.

Odds are, it isn't a very interesting story if the real facts were known, but a good "America is Bad!" story sells a lot of clicks, even in America.   Distracts people from that Brexit fiasco, too.   We'll likely never know what the real story is - the folks who were profiled never talked about their friends in the car (or even their names) who were "denied entry" and never explained how you can swerve into another country.   And I suspect they never will talk about it, either.  Why ruin a good story?

Class Warfare, the Home Version:  Another odd story - a clickbait article - that I didn't click on, went on to the effect that those evil people at Sallie Mae (you know the ones who keep pestering you to pay back the loans you took out, the loans you signed for) are at an "executive retreat" while millions upon millions of students are suffering!  The money spent on coffee and danish during the break could have paid off someone's student loans!   You see where this is going.  Sippin' champagne, no doubt, while the pee-pul suffer!   Let them eat cake!

And of course, they have to "profile" another "poster child" for student loan debt.  But when you pick away at the edges of the story, something doesn't add up!

A reader investigated and reports:

For being in such debt she sure seems to have a nice house, with nice furniture, fancy hair-do, waxed eyebrows...  I've always loved the "look at how much debt I'm in" pity picture which reveals all kinds of high spending.

$120,000 for her tuition at Lakeland College for a master's in business administration, to help with the cost of living as she worked through school.

This is the problem with graduate degrees.  As I noted in an earlier posting, for undergrad, you can only borrow so much, but for graduate degrees, they open the taps all the way.   You can live very well, as a grad student, and impoverish yourself for the rest of your life.

I feel sorry for this lady, as how are you going to get a job as a business administrator (whatever that is) if you are profiled in a national publication as being fiscally irresponsible?   Oh, wait, I hear Eddie Lampert is still looking for a new CEO.   Sounds like a perfect match!

Like I said, I know a young man in Buffalo who wants to go "back to school" as he was able to get a family friend to co-sign a loan on a new car and borrow money to get a degree - a degree which didn't really lead to a lucrative job.  Well, it lead to a job, but he was chagrined to see that he didn't instantly become rich overnight (I went through the same thing, each time I got a higher paying job.  Why wasn't I filthy rich already!   These things take time - a lifetime, in fact).

So he thought, "Why not go back to school?"  This time around he can borrow even more and get a new car (that four-year-old car he bought as an undergrad is "worn out").   Fortunately, the last I heard from him, he decided to change jobs instead.   A graduate degree would just mean a lifetime of debt for him.

It is like the sci-fi story I wrote about debt-slavery.  If you offered young people the chance to live like kings for four years, in return for perpetual slavery for the rest of their lives, how many would sign up?   Quite a few, I think.

I think also drugs are involved, perhaps not with this lady in the story, but with others.  I recounted how a friend of mine - a Patent Attorney, no less - had to divorce their husband when he developed a crack habit in law school.  "Let's spend the mortgage money on crack!" he said, and she headed for the door.

I wonder how many "oh, woe is me!" student loan debt stories have a backstory - "Spring Break" trips to Florida, trips to raves and rap concerts, and of course, a little pot, ecstasy, and a whole lot of beer.  This is not mere idle speculation, but an observation I made during my 14 years of college - of actions by others and myself.  Myself, I could never afford to go on those "Spring Break!" trips to Florida, as indeed, I felt as a student, we didn't deserve "vacations" (indeed, don't you get the whole summer off?).   But others lived quite well in college - and were quite poor after it.

A choice, not a mandate!