The Failed Promise of Internet Appliances 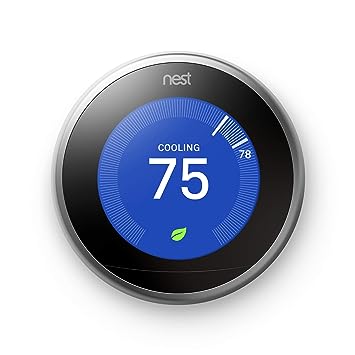 We were promised all sorts of neat tech that would be accessible from the Internet.  Is any of this stuff really worthwhile?  Is a "nest" thermostat really worth $225?

I was at a campground and saw a friend using his cell phone.  He was looking at his front porch, using an app that interfaced with his Internet Doorbell.   He could access a number of cameras at his house, adjust his thermostat, turn lights on and off, and even open or close his garage door (yes, they make Internet garage door openers, now).   It all seemed so science-fiction and high-tech, these automated homes.

But I am not so sure they are such a good thing, after all.   These toys - and they are toys - are expensive to buy, maybe not individually, but cumulatively.   I bought a new garage door opener at Lowes a few years ago.  I had repaired the mechanism for cheap, but the motherboard went bad, and the cost of the parts was close to the cost of a new mechanism.   They had them in two flavors, regular and internet-enabled.  The latter was $150 more than regular, so I declined.  Do I really want to open and close my garage door with an "app"?  I suppose it could be handy, to remotely let in a repair man.  But for some reason, that scenario has yet to materialize itself in my life.

Similarly, when we got our new A/C system, it came with an internet thermostat.  I hooked it up to the Internet just long enough to disable the internet functions and turn it into a regular thermostat (without internet access, it displays an error message that Internet temperature is not available!).  Again, do I really need to set my thermostat remotely by phone?  For what purpose?  Maybe a neat feature, but one I lived without in the past.  Why do I need it now?  (At least it was only $89, and not $225).  Before then, programmable thermostats were considered a "must have" thing, and most of us just used them as regular thermostats.  Chasing technology is pointless.

Internet cameras and doorbells might seem like a cool thing to have, to keep away thieves (or try to catch them) or to see who is at the door.   Of course, just going to the door isn't that hard in most houses, and you can't see who is at the door, unless you have the app running.  "Just a minute, I have to load my doorbell app!"   Cameras might catch your porch pirate in action, but it is doubtful if it will catch him - but you will have a YouTube video to upload as a result.   These are, in a way, like alarm systems - costly to use, difficult to maintain, and often not deterring crime.  Move to a better neighborhood and own less shit worth stealing  is a lot easier to do.

There are two technical issues as well - configuring the devices and Internet access.  For us, the latter was a real problem.  AT&T UVERSE would go dark about 30 days after we left the house, because no one was using it.  Or, if the power went off, there was no guarantee it would properly power back on.  Whatever the reason, for several years in a row, when we came home from traveling, the UVERSE modem was dead, and often this meant a hassle of phone calls, technician visits, and even new modems, in order to restore service.   We cut to the chase, cancelled service, and now use  our phones for Internet service - taking them with us when we leave.

So in order to have all this shit work, I would have to maintain an internet connection at the cost of at least $50 to $100 a month, and the hassle of maintaining it, as it broke yearly.  And for what?  So I can open my garage door remotely, see who is at the door, or change my thermostat with an app?   Sorry, but this doesn't pass the cost/hassle/benefit test.

The first problem is that these devices all have to be configured to work with your router or modem, and this requires some dicking around.   I caved in to Mark and bought fitbits and a fitbit scale, the latter of which turned out to be an utter piece of crap, logging us as "GUEST" rather than by our names, and the app was useless to try to correct this.  A lot of Beta-test crap being pushed out onto an unsuspecting public.   I recently put the fitbit back on (the lens is cracked, and you can't buy new ones, and the strap broke, so I am using the shocking pink one that came with it as a spare).   You can't set the time or date without loading the app (and updating it) and getting it to "sync" with your phone.  This sort of worked after a while, and the new fitbit "app" wants me to pay a monthly fee for "premium service" and join a kicky group of social media people, so I can brag about how many steps I walked today.

Problem is, we already tried this, and it didn't work.   The whole point of the thing was that it would automate my old system of the $16 pedometer from RiteAid, and the $25 scale from WalMart, and track our exercise, calorie count, and weight on a daily basis and chart this.   It never quite worked that way and we use the fitbit instead as an ordinary pedometer, eschewing the "app" features, and the scale is now being used as an ordinary scale.   I tried to configure the scale (again) to access the Internet, but gave up in frustration.   Even if I could get it to work, it wouldn't work, logging us as "GUEST" half the time.

Oh, sure, there are some cool "wearable" features - it will display text messages on your wrist, but only once.  If you tap on it, the message evaporates.  And you have to have the app ON and notifications set to ON as well.   Fun toy, but I don't need the battery drain or memory use on the phone, frankly.

So, take all this, and add the hassle of synchronizing doorbells, lamp timers, garage door openers, security cameras and whatnot (Internet enabled toilet? I am sure it exists!).  It is about as much hassle as programming a sprinkler system or lawn lights.   It is creating complexity and expense in your life, and the payoff just isn't there.  Or if it is there, it is fleeting and tiny.

And this shit never works they way they claim it will.   Sorry, Silicon Valley, but I've bought a ton of your electronic crap over the years, torn open the package, tossed away the instructions, ate the gel pack, and plugged in the ubiquitous wall-pack transformer, only to find out that the vaunted "features" never quite worked the way you said they would, or if they did, they didn't work for long.   Or if they did work, the technology was obsolete within a year or two, and the "must have" technogadget of two years ago is sitting around in a drawer somewhere, unused.

Recently, I went through a box of such crap - outdated cell phones, several VoIP boxes, multiple cable and DSL modems, broken computers and computer parts, obsolete cables (RS-232?  Centronix?), digital cameras, MP3 players, landline phones (and a landline cellphone adapter) and so on and so forth.  All of once coveted technogadgets, now just garbage - and toxic waste at that (due largely to battery issues).  You hate to throw it out, as "it might be useful for something" - but never is.  Keeping it is just hoarding garbage.  And the sad thing is, most of this stuff was used for a brief few months, before it was obsoleted or broke down, or we just lost interest in it.

You could get depressed about this, but I learned a valuable lesson from it:  Before you sign up for the latest technogadget, take a good hard look in that "drawer, somewhere" (or box or shelf or whatever) and think about how excited you were to buy that old piece of technogarbage, and how long it will be, before the latest and greatest joins its friends in that drawer.

It is funny, but some things endure.  I still have my hoary old Toshiba laptops.  One recently lost its battery - it would not hold a charge.  But a new one was available on eBay for $20, delivered in two days.  Damn, this computer is nearly a decade old!  But it does everything I need it to do, and every day, I need it to do less and less.

It is hard to tell in advance, of course, what will last and what is flash in the pan.  But I think after a few decades, I can spot the gadgets from the useful tools.   And anything that promises to make some trivial aspect of your life "easier" is likely to end up in the dustbin in short order.

And I think this encompasses most "internet appliances" these days.