A jet airliner might not get very good gas mileage but it holds more people than a Toyota Prius.

The wacky left his been at it again, this time claiming that traveling by airplane is somehow destroying the environment. One of my professors at General Motors Institute told us that, back then, traveling in a Boeing 707 had the equivalent fuel efficiency to riding in the back seat of a 1959 Cadillac Eldorado.   Come to think of it, we had a lot of left-leaning professors at GMI.  I guess it is an academic thing, those who can't do, agitate.

Of course that's assuming there's four people sitting in the Cadillac Eldorado, which back in the day at best got 20 miles per gallon on the highway.  If you figure that out on a per-seat basis that works out to about 80 miles per gallon for each individual.  I guess airplanes weren't so bad, even back then.  And since then, engine efficiency has improved greatly. 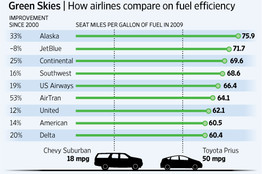 In terms of per-seat fuel mileage, some airlines are better than others.  But beating a solo Prius isn't hard to do!

Today, airplanes have a per seat fuel-efficiency ranging from 50 to 90 miles per gallon, depending on the aircraft, how many seats it's configured for, and how full it is (and which website you reference, and how old the article is).  Now, granted if you and four of your friends decide to drive from New York to Florida in a Toyota Prius and average 45 miles per gallon, you'll beat the airplane in terms of per seat fuel efficiency.  It would probably be about as comfortable, too.

On the other hand, if you're traveling alone on that same route to attend a business conference, you'd be doing the environment a bigger favor by traveling by air.  Plus you'd save an awful lot of time.

This illustrates why car pooling increases efficiency more than going to a fuel-efficient car.  Maybe a commercial van doesn't get better mileage than your Prius, but in terms of per-seat efficiency, it blows it out of the water.  A 20-mpg Ford van with 10 people aboard is getting 200 mpg per seat.  Beat that, Toyota!

Of course, there are some routes where travel by air is not a matter of choice.  Crossing the ocean by Prius would be very difficult.  And even in an ocean liner, I'm not sure of the cost per gallon per seat would be competitive with an airliner.   According to some sources the per seat miles per gallon of an ocean liner would average about 19 mpg. So, sailing by boat isn't the answer. Plus, it would take days instead of hours.

But what about mass transit?  What about travel by train?  Well a train is slightly more efficient than airplane, but not by much.  It's not like you're saving 50% in fuel by going by rail.  In fact, take a close look at that chart - off all the transportation options, airlines come in second, in terms of efficiency.  And again, the time factor comes into play, as it can take you days to travel cross-country by train, whereas you can do it in a few hours by airplane.  And as of yet we don't have trains running in underwater tunnels from New York to Paris.

So what does this all mean? To me it means that another silly argument is being made which is obfuscating the reality of our situation.  People are picking at arbitrary things as examples of "excessive carbon emissions" when in fact there is a lot of better low-hanging fruit we could go after.  It is like going after soda straws in the United States and ignoring the vast amounts of plastic waste dumped in the ocean by Asia and India - which comprises the majority of the world's plastic pollution problem.  Again, it is a sign of our greatness that we care about these things - and a sign of weakness of the people in China and third world countries who just throw their shit in the ocean or on the ground.  That being said, we should not take things to ridiculous extremes and engage in guilt politics.

The people making these arguments are not doing the math, and I doubt they would understand the math even if they tried to do it. No doubt these are the same folks who are arguing that airplanes are spraying us all with "chemtrails." It's a sort of pseudoscience and para-science that is destroying our country.   It is part of a disinformation campaign, aimed at members of our cargo-cult society, who have no idea how basic technology works - but have an opinion, anyway.

Of course going forward, the problem for the airlines is that while automobiles can be converted to electric power and arguably powered by carbon-free sources such as solar, wind, nuclear, or hydroelectric, airplanes don't have this luxury.  Granted, there have been a few electric airplanes built and tested, but most of these are lightweight one- or two-seater models that have very limited range.  And even if they can be made to circumnavigate the world, they do so at very, very slow speeds.  It doesn't look like any time in the near future there will be an electric jetliner flying from coast to coast on lithium-ion batteries.

Thus, in terms of carbon footprint, the automobile and the train have the potential to reduce their carbon footprint to zero, while the airliner will be stuck with its current carbon footprint, more or less, as increased efficiencies of the jet turbine and high bypass fan reach the law of diminishing returns.

All that being said, I'm not sure the age of jet travel is going to be extinct anytime soon.  I don't think we're going to go back to flying by dirigible, either - no matter how much you wish it to be so!  Besides, Zeppelins are fuel hogs, too!
Newer Post Older Post Home