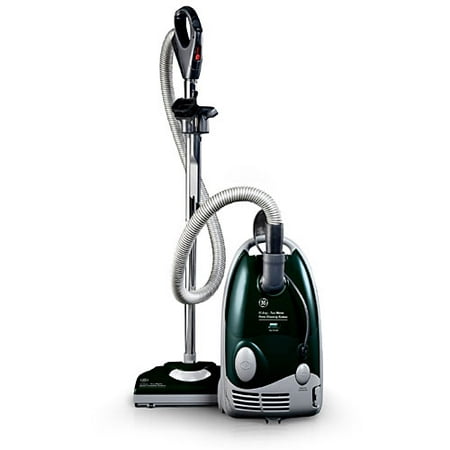 We've had more expensive vacuums than this, but they have not worked better.


Vacuum cleaners are an interesting market. You would think they pretty much would have reached a design zenith ages ago. You'd think they would be pretty reliable, too. And moreover, you'd think they be pretty cheap. And you'd be wrong on all counts.

We've had a number of vacuum cleaners over the years, some expensive, some not. And the funny thing is, some of the best and longest lasting have been the less expensive models.

We had a Kirby, which was a hand-me-down. As you may recall, my hapless brother became a salesman for the brand and made one sale - to my Mother. It was a big, heavy, clunky thing that weighed a ton and cost over $300 back in 1980, which was a lot of money back then, and even today.

It worked well and lived up to its reputation, but the dust bag was, well, dusty. And when it eventually died, well, we let it go, rather than have it "rebuilt" at the factory as the Kirby people will do. Too many complex moving parts, attachments, and things. Commercial vacuums for hotels are similar in design, but made with fewer attachments and gizmos, and probably last longer.

We had a consumer-grade Hoover upright for many years after that. It worked OK, but the thing to remember about consumer-grade appliances is that you have to treat them as though they were made of plastic - because they are. Our cleaning lady would yank the plug out of the wall from across the room and slam the thing into furniture, breaking off bits and pieces of it, and then complain, "Senor Robert, the Vacuum no est bueno!"

So we paid a lot of money for an Electrolux. In the old days, the Electrolux canister was THE vacuum cleaner to have, and chances are, your Mother had it serviced by a local vacuum cleaner repair guy who worked out of a converted garage in his back yard. They were made out of stamped steel and built like tanks. As a boy, I would ride it around the house like a wagon, it was that durable.

Fast forward 30 years and the new Electroluxes are made of - you guessed it - plastic. It was not a badly made vacuum cleaner, just very expensive for what was now a consumer-grade appliance. Vacuum cleaner stores still existed when we bought it. By the time it died (about five years later) the vacuum cleaner store was closed.

What to replace it with? A trip to the local "big box" store revealed a line of Dyson "ball" vacuums that promise to liberate you from the bag. They are advertised on TV by a guy with a British Accent, and well, you know, anything with a British accent is classy and better.

But British technological prowess has taken a beating in the last few decades. Ask anyone who has owned a British car over the years, and well, you know how that works. Expensive, esoteric, breaks down often, expensive to repair.

And the Dyson cleaners were a lot of money - $300 or more, some much more. I was not sure I wanted to gamble my money based on a clever advertising campaign based on the American instinct to view anything vaguely British as classy and superior.

Instead, we bought a GE 2-motor canister vacuum, model 106766 at Wal-Mart for about $100, basically because it was about the cheapest thing they had on the shelf. They are about $150 now and harder to find. We ended up buying a second one for the lake house. And for the money, it has been a darn good vacuum cleaner.

Now that we don't have a cleaning lady, wear and tear is reduced considerably. Again, treat these like the consumer-grade products they are, and they will last for years. Ours have lasted over five years so far, a pretty good track record compared to the more expensive models.

The only problem I have had is that the connector for the power head (at the wand) came loose on one, and then arc'ed, causing corrosion and blackening. The power head stopped working. This is apparently somewhat common, as it is mentioned on many online sites. But it is not hard to fix, either, by cleaning the contacts and applying dielectric grease.

These units should provide a decade of good service, with reasonable care. It is a shame that we went through so many other vacuums over the years - most lasting only 2-5 years before breaking.

And the nice thing about a cheap vacuum cleaner, is that if it does break, well, you can just toss it away. But amazingly, parts for this machine are indeed available online. So if it does break, it can be repaired, if you are handy with tools.

Fancy expensive consumer goods are fine and all, but often they provide no better performance or service life than less expensive, mass-market items.

In vacuum cleaners, like coffee makers, oftentimes the cheaper model is the better bargain.

Now, like anything else, there is probably a point where too cheap is no bargain, either. Wal-Mart has a line of vacuum cleaners, mostly Dirt Devils, that are little more than $50. I doubt they would work as well or last as long. Sometimes there is such a thing as too cheap!

NOTE:  Cheap bags for the GE CN-1 can be found at the Online VacShop for about a dollar apiece.
Newer Post Older Post Home