Should You Buy or Sell on Craigslist? 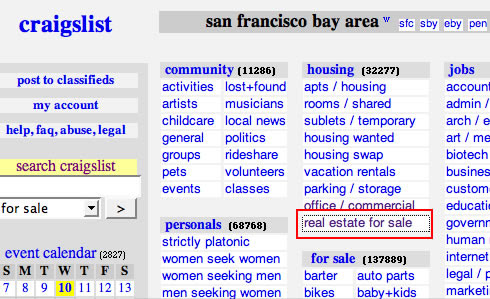 Craigslist has become a substitute for the traditional classified ads. However, when something is "free" it does create a lot of problems for users.

Craigslist sucks, lets face it. There are so many problems with the service it isn't funny. And it's getting worse and worse over time. And many of the "fixes" instituted by Craigslist are causing most of the problems.

In its infancy, it worked well, as did eBay, as the people using the Internet were Internet people - computer geeks who played by a set of unwritten rules. But as the Internet has become the network for the everyman, people, often unscrupulous people, have figured out ways to basically wreck all the fun.

So you want to sell your old futon. You put it on Craigslist. You get e-mails from scam artists and maybe a serial killer comes to visit you. Fun, eh? But actual BUYERS? No, you don't get any of them.

P.T. Barnum said it best - "never let the suckers in for free - people don't value that which they don't have to pay for". You want people to take something seriously, you have to CHARGE for it.

Craigslist has remained like a cult, fairly secretive in its operations, and also steadfastly refusing to take paid advertisements or charge user fees. How long they can keep up this "business model" is anyone's guess, however. You can't run a business like a religious cult.

There are several features of Craigslist that are disturbing. First, since everything is free, anyone can post anything. And that often means that people who want to sell outright junk list it on Craigslist for a billion dollars. This ends up wasting your time, as you spend countless hours tracking down some clown to see his broken-down (fill in the blank) only to drive an hour out of your way to find out that whatever it is he is selling should be put in a dumpster.

Since the listings are FREE, people with garages or back yards full of junk feel obligated to list things there. Most of these are people with hoarding disorder, who merely want some validation that their crap is worth something. They post a misleading advertisement, and if it generates interest, they fell justified in keeping their mounds of objects. But they really aren't interested in selling anything, even if someone really wanted to buy their pair of bald snow tires.

These sort of sickos don't advertise in conventional classified ads, because they cost MONEY. When someone is SERIOUS about selling something, they are usually willing to part with some CASH as part of the deal. But "FREE" attracts all sorts of fringe elements, and unfortunately, on Craigslist, these types can predominate, drowning out the ads for quality items that are really for sale.

And if you DO have a legitimate item to sell, watch out, because if it is "flagged" by anyone, they remove it. And lately, people have been abusing the heck out of "flagging". Some folks have even written 'bots to flag the snot out of everything. And since Craigslist takes a "hands off" approach to flagging, if your posting is "flagged" it gets deleted.

Why do people "flag" your legitimate post that is in the correct category? Why do people spray graffiti on the wall? Why do people pee on the toilet seat or smear feces on the wall? Some people are fucked up. And if you get enough of them together, well, it only takes one or two assholes to ruin everything. So all it takes is a few deranged individuals to go online and start "flagging" the snot out of everything, and all the postings get deleted. This begs the question, why bother posting anything then?

And then there is the parochial nature of Craigslist. Their mantra is "buy local". But often, the best deals might be found an hour or more away. But since you can only advertise locally, you can't reach those markets, and moreover, it is harder to search far-away markets.

There are services, like searchtempest, that will search all the Craigslists nationwide for an item. For some items, like vintage car parts or an old Airstream travel trailer, it is worthwhile to do a nationwide search. For some reason, Craigslist people think this is a horrible idea. "Buy Locally!" they chant, not realizing that if you want a left-handed carburator bracket for a 1954 Chevy pickup (and it's different than the '55 and '53) you might want to look in places other than Elmira New York and its environs.

If you use SearchTempest or one of the other Craigslist aggragators, the system may lock you out, blocking your IP address on the grounds that you are searching too many sites at once.

Now, you might say, "Well, this is all very good, they are trying to police abuses of the system - by allowing flagging of items, they keep the system clean, and by blocking IP addresses of people searching too many sites, they prevent 'bots and spammers for accessing Craigslist."

Oh, if only that were true! The reality is, the con artists are all over Craigslist and rarely, if ever, are their posts flagged or deleted. And if they are, they just re-post, over and over agian. When you see a car for sale for less than half its book value, that is a tipoff. Then you e-mail the person, and they tell you a wild tale of how they are overseas and they will have the car shipped to you. Scam, plain and simple. And these "deals" are all over Craigslist.

And even Craigslist knows this. In the "Cars and Trucks" section, there is a highlighted heading that says "ALL OFFERS TO SHIP CARS ARE FRAUDULENT!" - so they know what is going on. But, the offers continue to plague Craigslist.

Meanwhile, my legitimate offer to sell a set of used car parts is "flagged" as "inappropriate" for the "Car parts for sale" section.

I've wasted countless hours on Craigslist trying to find things. Either the people are DREAMERS trying to sell junk for top dollar, or they are impossible to get ahold of and won't tell you a time and place to come look at the item in question. They are afraid to give you their home address, because they are afraid you might be a serial killer. It has happened. Since Craigslist takes no money, they can't afford to have a system in place that would at least monitor who sees your ad and who contacts you.

P.T. Barnum had it right. When the SUCKERS don't PAY for something, they don't appreciate it. Craigslist has devolved into little more than a graffiti-covered bathroom wall. For a good time, call Suzie 555-1212.

Craigslist sucks. Scammers predominate, as they figure out the rules of the automated system and just skirt them. Or they just keep posting and re-posing over and over again. But Joe Everyman, trying to sell his lawnmower, gets flagged. The spammers are taking over Craigslist and then shutting out the individual.

Um, how many times have we seen that happen on the Internet? Remember NewsGroups? Simple, fast, fun, - FREE. Then they got slammed with SPAM and no one could use them anymore.

And apparently I am not the only one to notice this. Google Craigslist Sucks sometime and you may see result like this one.

The existence of Craigslist illustrates that there is a desperate need for a centralized place on the Internet to buy and sell your stuff. But the problems with Craigslist show that the "free" model simply doesn't work.

And I'm not saying I've never bought anything on Craigslist or ever sold anything. It is just been that for every transaction I have consumated, there have been probably 10 aborted transactions because the seller was fraudulent, the goods were in horrible condition, or the seller or buyer never responded to calls, e-mails, failed to show up, etc.

And Craigslist will be relegated to the trash heap of history.

What a freaking waste of time! Anything FREE basically sucks most of the time.

You DO get what you pay for. And FREE gets you BUBKIS.
Newer Post Older Post Home