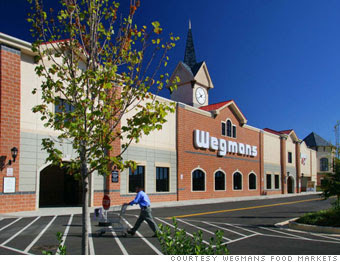 Wegmans is coming to your town soon. It has its good aspects and its bad ones, like anything else.


I just returned from the Ithaca Wegmans. Each Wegmans is a little different, reflecting the character of its area. The one in Auburn has more simple fare and I suspect they cash more food stamps. The one in Ithaca is more pretentious and has more upscale and organic fare - which is far more costly.

The Wegmans family are smart and they know how to run a grocery store. Their chain is spreading down the Eastern Seaboard, and chances are, they are coming to your town soon. And they will kick the ass of Safeway, Food Lion, Giant, Publix, and Harris Teeter. And watch out Sutton Place Gourmet (Balducci's) and Whole Foods, Greenstar Market, Trader Joe's and all you other "upscale" food markets, because Wegmans is taking your business model to a whole new level.

Imagine Whole Foods, only the size of a Safeway, with prices that are competitive. You may understand why food market executives aren't sleeping well these days. In fact, the only thing Wegman's has to worry about is Wal-Mart. Wal-Mart has set its sights on Wegmans and other upscale retailers. They realize that you can make good money selling upscale, and they are already the world's largest purveyor of organic foods. You read that right, Wal-Mart.

So Wegmans will be a welcome addition to any town, although some local stores will likely suffer. Competition does that. And while there are bargains at Wegmans, there are also some complete rip-offs. Like anything else, you have to shop carefully.

For example, we found "organic" locally grown beef and chicken there. How politically correct! But the price was more than double the ordinary kind. Paying $12 for one small steak is a helluva cost to make a political statement, at least in my book. Why should organic cost so much? Because they think people are willing to pay that much. Wal-Mart has a different idea in that regard.

Similarly, their gourmet section is astonishingly priced. If you are looking for cheese, they have a pretty good selection (the area is structured to make it look like they have more cheeses than they actually have, however). More pedestrian cheeses are in the dairy section and are, of course, a lot less expensive. Vermont Cabot extra sharp is a decent cheese for the dollar, and I am not sure artisinal locally-made sharp cheddar is that much better at five times the price. That is to say, of course, that I don't mind paying a lot for a good cheese. And I did buy a few of their higher-end cheeses. And they were good, too.

The rest of the store is a confusing maze of aisles and designed sort of in a modified race-track, to get you to shop, instead of buy. Impulse purchases are the name of the game in any retailing, and they certainly play to that. Compounding the problem is that the food is divided up by category - ethnic, organic, kosher, locally grown, etc. You want a good pickle? You have to check five different parts of the store. And while the store is huge, Tops has a better selection (the Tops in Ithaca is very well run and could give Wegman's a run for its money. Plus, the "paint the ceiling black" is SOOOO 20 minutes ago. Tops looks cleaner with a white ceiling. I'm shopping for food, not attending a night club).

Other products are chronically understocked. There is a variety of spinach pancake they sell, for some reason only the Kosher case (because only Jews are allowed to eat spinach pancakes, apparently). They are almost always sold out. I asked the manager why they don' t stock more of an item that obviously is very popular and he gave me a blank look.

Morningstar farms items sell out regularly, and the manager's only advice was to "get here when we re-stock because they sell out fast." Some way to run a business. If a product sells out regularly, you might want to think about ordering more. Maybe I'm crazy or know nothing about retail, but it sounds like a good idea.

By the way, Wal-Mart usually has a fairly good selection of Morningstar Farms items and they are nazis about keeping the shelves stocked, too. Wegman's has a weakness here, and Wal-Mart and Tops could exploit it.

My neighbor shops at both Tops and Wegmans and she reports that she can get good deals at both, but you have to shop carefully at Wegmans. Of course, she goes to the Auburn one, and rarely fills her basket with artisinal cheeses and micro-brews.

Overall, after several years of shopping there, I have to say the "Wow" effect wears off quickly. You realize that the apparent cornucopia of food, while broad, is really very shallow. They simply don't have a lot of items, and they carry a lot of things that you never would want (the candy department, for example, is a huge section of the store I never visit).

They have a big Vegetarian section, but it is mostly what I call "candy vegetarianism" type foods. Chips and candy and cookies and sugar-laced cereals, which appeal to college students who want to draw attention to themselves by declaring themselves to be Vegan or whatever, but don't want to actually work at it. Two twenty-something girls were roaming the aisles there during my visit, replete with body piercings, tattoos, and some interesting sartorial choices (boots apparently formerly owned by a pig farmer). One remarked to the other than she "needed to do better on this Vegan thing" and admitted she had scarfed a hot dog the other day. That's about as far off the Vegan wagon that I think you can fall, frankly. No pun intended. But it illustrates how pretentious Ithaca is, and in particular the Ithaca Wegmans.

Try to find non-HFCS tonic water there. You'd think of all places, they'd have it. But no, like Safeway, the choices are Schwepp's and Canada Dry (same company) or store brand (probably from the same factory). Store brands are surprisingly limited in selection. All the store brand cereals were laced with sugar, for example.

And prices on many items are simply not that great.

Wal-Mart is in the middle of a major overhaul of its Ithaca store to offer a full grocery section. When completed, it will be interesting to see how well they do. Of course, the anti-Wal-Mart rhetoric has great currency in Ithaca, but if the prices are lower, the store cleaner and better organized, well, they will take a bite out of Wegmans.