When should you take a LOSS? 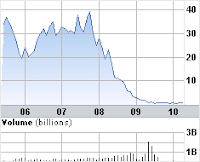 Owning GM stock was quite a sleigh ride.
Today the stock is nearly worthless.
It is disappointing when one of your investments does this. When you should you call it a day and sell?

As I noted in my Realization Events posting, you don't actually "experience" a loss, from a tax perspective, until a realization event occurs- you buy or sell the stock. So if you keep a loss "on the books" so to speak, you haven't really experienced any real loss.

But when you actually sell the tanked stock, you experience a realization event, and thus "realize" your loss and can thus take it as a deduction from your income for tax purposes.

So should you do this? Well, like anything else, "it depends".

To begin with, unless you are past the age of 59-1/2, you can't really realize losses from your IRA, 401(k), SEP or other pre-tax retirement accounts. And even then, they are just losses, not realized losses from a tax perspective, as we shall see later.

For example, I rolled over one of my 401(k) accounts into a self-directed IRA with eTRADE. Is this a good idea? Well, the account is worth about what I put into it about two years ago. During the "big crash" my self-directed picks dropped about 15% in value, compared to 25-30% for my Fidelity account. So I have done OK with it.

But as we shall see, one problem with stocks is that they can drop in value all the way to ZERO, which means, if you self-direct your IRA, you could ride it all the way down to nothing. Paying off your mortgage, on the other hand, is a far less riskier proposition.

Using my eTRADE account as an example, I have picked three real loser stocks over the years - ones that have tanked to zero or near-zero: General Motors, Fleetwood Enterprises (the largest maker of RVs) and Fannie Mae. In each case, we are tallking about "investments" of only a couple of thousand dollars. The great thing about low-cost brokerages, is that you can diversify your investment for only a few dollars a trade.

Taking my GM investment as an example, I paid $35.69 a share for 50 shares of the stock, or about $1830. Obviously this is not enough of a risk to bankrupt me. But nevertheless, it is an example of poor investing. I did not do enough research or think about why I was buying the stock, other than it seemed to be doing well at the time and, hey, it's General Motors we're talking about, what could go wrong? It's not like the world's largest car company will go bankrupt, right?

I can be flippant about this loss, as I have diversified my portfolio. I try not to put all my eggs in one basket. Anyone foolish enough to put all their money in GM stock would be broke right now, like those poor saps who put their entire 401(k) in ENRON stock. Never, ever, invest all in one thing!

But getting back to realization events, if this were a after-tax trading account (such as my AmeriTrade account) I could sell my Motors Liquidation stock and take a $1763.79 loss, which would equate to about a $650 cut in my income taxes, if I was in the top bracket. There is little point in hanging onto the stock - Motors Liquidation Corp is unlikely to ever bounce back to $35 a share anytime soon.

So every December, before the end of the tax year, it pays to look through your portfolio and see if you have one of these stinkers in your after-tax investments. If you do, well, then you should think about selling it and taking the loss - and cutting your tax liability in the process.

But what about losses in your 401(k)? Well, there's the rub, and one reason I may end up a shareholder in "Motors Liquidation" for a long, long time. You see, there is no tax write-off on monies you never paid taxes on in the first place. Since the money in this self-directed IRA has never been taxed, I can't claim a corresponding deduction on my taxes.

In this case, it is a loss that is offset by other gains, with no realization event from a tax perspective. Even when I reach age 59-1/2 and can draw from my IRA, I won't be able to claim the "loss" to my income, as I never paid taxes on the money in the first place. The only effect the loss will have is by decreasing the balance on my IRA, it means I have less money to take out of the plan, and thus will pay less taxes as a result. The net result is the same.

Now again, if this were in my after-tax account (which I maintain with AmeriTrade) I could take the loss on December 31, and have a nice deduction for my taxes. But that does not mean you should only invest in stocks with after-tax money. It merely illustrates the different mechanics involved.

Chances are, your 401(k) or IRA is invested with stocks, just in the form of mutual funds. When an individual stock tanks in your mutual fund, you do not declare a loss, it only affects the overall mutual fund price. And when you retire, you will pay taxes on the amounts you withdraw from the fund - which is all taxable, as the money in the fund was never taxed. An individual "loss" on money in the fund means only that you might have less money to pay taxes on.

But the self-directed 401(k) plan does have one anomaly. My eTRADE account charges $9.99 per trade to buy or sell stocks. Sometimes they have 2- or 3-for-1 "specials" or even free trade days, but for the most part, I have to pay a fee, albeit a small one, to sell any stock. Motors Liquidation is now worth $32.50 in my account. Is it worth paying $9.99 to sell the stock when there is no realization event that occurs?

Or how about my Fleetwood stock, now worth a staggering twenty-eight cents - not per share, the whole darn investment! Is it worth spending nearly ten bucks just to take this off the books?

Of course not. So these stinkers stay in my eTRADE account, as painful reminders of bad choices I have made in the past. In a way, they are sobering, and perhaps worthwhile to keep in there. For every AVIS stock pick I made (1200% gain in 8 months, nearly $10,000 in gain!) I have at least one GM or Fleetwood or Fannie Mae.

Investing in stocks, for the average Joe, is like buying a pig in a poke. There is little transparency in the market. Prospectuses and Annual Reports are indecipherable to the average investor. Most of us rely on the rationalization of the market to inform us of values, and that is perhaps the worst mistake we can make.

If a million people think GM stock is worth $35 a share, then that must be a pretty good evaluation of its market value, right? Well, as we have discovered, that isn't always the case. Markets can be irrational, and even seasoned investors, professionals, and Wall Street Gurus can be very, very wrong on the evaluation of stocks and other investments. In the case of GM, it might be market trends that people couldn't see or refused to see. In the case of ENRON, it might be outright fraud.

In either case, the small investor has little or no way of knowing how an investment will do in the future. Will the market for widgets dry up in a year or two? Or are the officers of the company looting the place, rigging the books and then leaving by the emergency exit and pulling the ripcords on their golden parachutes? For us, it is hard to tell.

Diversifying your investment portfolio is one way to protect yourself from an overwhelming loss. Research and investigation is another. Never rely on market price or market price charts as a guide to the underlying value of an investment. As many of the "Gold Bugs" will no doubt soon discover, just because something is going up, up, up, doesn't mean it will go that way forever.

But hey, on the plus side, they'll have a staggering loss to take on their taxes!
Newer Post Older Post Home