The Tragedy of Bling Rims 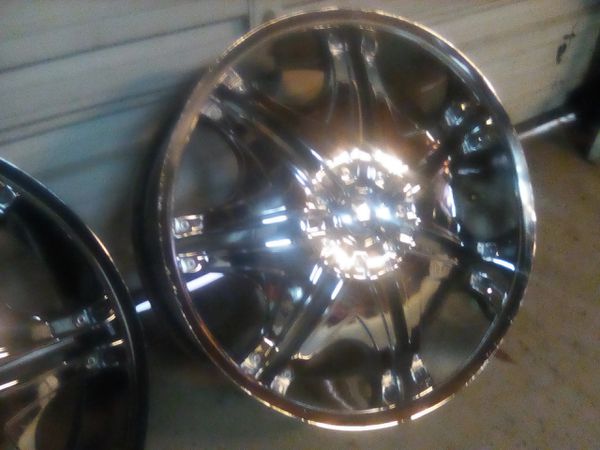 Bling rims, once the coveted object of desire, are now languishing on Craigslist, unsold, at less than 1/4 their purchase price - after only a season or two. Is this a good use of your precious money?


I have written before on the phenomenon of bling rims and the youthful desire to "mod" cars, as well as how people from very poor neighborhoods tend to squander their money on gaudy shiny trinkets. It is a real shame, too, as these are folks who can least afford to squander what little money they have, and yet they spend it all, as fast as they can get it, to buy shiny "status" items that they covet.

And historically, this has been the case. We tend to criticize European settlers for swindling the Indians of Manhattan by getting them to sell the entire island for a few worthless shiny beads and trinkets. And yet, who is to blame, the purveyor of trash or the people who buy it? Do we blame the check-cashing outlet or payday loan enterprise for pandering to people's weaknesses, or do we blame people for being weak?

I have no answer, other than I try to avoid exploiting people in my own life, and I am not sure I could run a payday loan place with a clean conscious. Others are less troubled by the concept.

Regardless of the moral or legal implications, however, is it incumbent on you, the consumer, not to fall for such scams and rip-offs. The rip-off artists are not going away anytime soon. So you have to be proactive and careful with your money. And the one sure way to do this is to avoid buying shiny trash like bling rims.

Why are these such a rip-off? Because they cost thousands and thousands of dollars and do little, if anything, to improve performance of a car. Moreover, they do not last more than a few thousand miles in many cases. Nearly every house in the ghetto has a set of old aftermarket rims and tires in the basement or under the porch. And this has been going on for decades - since the days of "Crager mags."  Bling rims are only the latest example of the trend. The owners are too proud to sell them, as they "paid a lot for them".

Or some cases, still owe on them. Yes, they have "rent to own" bling rim stores in many parts of the country. So even if you are dead broke, you can buy a set of shiney-shiney for $100 a month. And yes, they do re-possess such rims, on a regular basis. One friend of mine reports that while at work, there was a commotion in the parking lot.  "Hey, they're stealing the wheels off Joe's car!"  Joe sighed and said "No, they're just repossessing them." The company left Joe's car on cinderblocks in the employee parking lot. Pretty pathetic, eh?

About as Pathetic as this Craigslist listing:

Ouch! Over $5000 spent on a set of tires, basically, and they get one season out of them. And worse yet, their car needs major repair work, and rather than fix that, they went out and bought bling rims.

Most of these rims are cheaply made. And even the quality ones have problems. With large sizes and low-profile tires, they ride harshly and provide little protection from potholes and the rest of the real-world things you will encounter. So they tend to bend when you hit a pothole, and since the styles change continuously, chances are you can't get a replacement wheel to match.

The tires are generally cheap Asian brands that do not last long, tend to tramline, and are noisy. Even quality tires in this size range are "performance" types with short tread life (30,000 miles or less, often far less).

Consider this set, for sale by someone with a stuck caps lock key:

THESE RIMS ARE MADE BY STRUCTURE AND HAVE FALKEN TIRES THAT HAVE VERY GOOD TREAD LEFT ON THEM. TIRE SIZE IS 265/40R/22 (106H M+S). ONE RIM HAS A LITTLE CURB SCUFF BUT THE REST ARE LIKE NEW. I BOUGHT THEM BRAND NEW FOR MY X5 AND USED THEM 2 SUMMERS AND NEVER USED IN THE WINTER. $1200 REDUCED!

Pretty Pathetic, eh? The guy got a few miles of showing off out of thousands of dollars of money spent. What is the point to all this?

In addition to the damage to the rims, these types of wheels and tires can damage your car. Often they don't fit, rubbing against fenders and frame members. When you hit a bump and the wheel hits the bodywork, something has to give, often the bodywork, or a suspension piece (such as a tie rod or ball joint).

And cheaper rims are often heavier than stock, so they tend to increase un-sprung weight, further reducing real performance and making the car handle oddly and ride poorly. They can give a car a 'heavy foot' feeling.

And in most cases, larger rims such as these (22") are have a larger outside tire diameter than stock, and thus lower the effective final drive ratio. This equates to slower take-off from stoplights, decreased towing and load capacity, and a tendency to lug the engine when in high gear.

And of course, they do tend to get stolen on a regular basis, too. So you have that to deal with as well.

So, performance degradation, damage to the car and the wheels/tires, short service life, staggering cost, whats not to like? Oh, and they are almost always bought by the segment of our society who least can afford to squander money.

Isn't that their own business? Perhaps. But when your girlfriend is on public assistance and collecting ADC and foodstamps to support your children, while you are out buying bling rims (as I have seen on more than one occasion) something is seriously wrong. Because in effect, we are all paying for these monstrosities.

And even for those who are not living off public assistance or shirking their responsibilities to society, the squandering of large sums of cash on these things is just poor financial planning. These same folks will no doubt be destitute later in life and then petition the government for assistance.

And even for those who claim they "can afford it" one should wonder if spending $5000 to get three month's use out of a set of wheels is really cost-effective.

Oh, yea, and one more thing. They are as ugly as sin.

UPDATE:   A young man in our town has a 1995 Ford F150, which I know is a 1995, as I used to own one.  But unlike mine, which was pristine and on its original wheels, his is bondo'ed and painted an iridescent purple.  It is also shod with three 24" bling rims.   Three of them, of course, because one bent easily (they are made in China from Chinesium) and he can't afford to replace it because he's still making payments on the original set.   Besides, the bling rim emporium (Sam's Rent-to-Own) no longer sells that style.

But the real tragedy is that this guy works at a low-wage job and has a wife and child to support.  The money he threw at this old truck and cheap wheels could have been better spent.   Now that he has a kid, he drives around on three bling rims and the spare, with the truck leaning to one side, like a stricken aircraft carrier.
Newer Post Older Post Home