Time for a Smaller House? 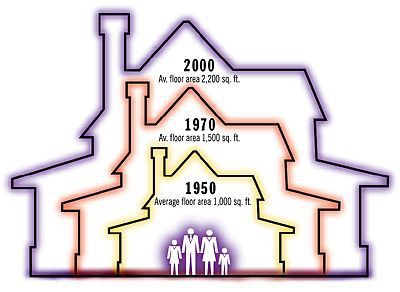 Since the 1950's house size has steadily increased nearly every year. However, over the last three years, houses have dropped in size over 10%. What is driving this trend?

Think Small. Small is in. Smaller is better. Less is More. You've heard it all before. But is seems Americans are finally catching on and demanding less in life.   For the first time since the 1970's, houses are getting smaller.

And it's about time. In the 1970's, the average house was about 1600 square feet. From then until the peak, in 2007 (remember that year?) houses steadily increased in size to a whopping 2300 square feet. Remember, these are average amounts, so that means some pretty staggeringly large houses out there.

And during that time period, average family size dropped. While my parents thought they needed to have four children (and many of my friends in the 1960's came from families of 6, 8, or 10) it is getting expensive to raise children, and many modern families have only one or two.

In short, families are smaller but houses got bigger. Why? Because we've become a wealthier country since the 1970's. Simple as that. Headlines like to blare about how bad we have it, but the reality is, almost everything you can buy these days is cheaper than its counterpart in 1965.

And many things are less maintenance-intensive than back then. Scraping and painting a house-full of windows was almost an annual chore in the 1960's. Today, vinyl windows last decades with little more than cleaning.  We can own more today because it requires less work.

A lot of factors are at work, I think, but overall, this probably is a good trend. Over-sized homes are expensive to heat, require a lot of space, cost a lot to build, a lot to buy, and a lot to insure, and they also have high property taxes. The time was simply ripe for smaller homes.

1. Baby Boomers Retiring: As the population ages, more and more people are looking forward to retirement. And many of them would like to do more than mow oversize lawns and clean five bathrooms. Having a huge home is a maintenance nightmare.

2. Property Taxes: As I noted in an earlier post, one way taxes are increasing for the middle class is in the form of steep property tax hikes. The "Teabaggers" are not protesting Federal Tax rates, which have remained largely unchanged for the middle class. No, they are protesting an increase in their property taxes from $1500 a year to over $8000 a year - all to pay for State-mandated welfare programs. A smaller house means smaller property taxes.

3. The Economy, Stupid: Yes, with a recession, people can afford less, so they are buying less. While the incremental cost of a larger house is not a lot of money, people are looking to save a buck or two here and there, and as a result, demanding smaller homes. That's all they can afford.

4. The Energy Crises, Part II: When gas spiked to $5 a gallon in 2008, every panicked. Suddenly, the idea of heating and air conditioning a two-story atrium entry-way with a "Tara" staircase, just to impress the neighbors, made little sense.

5. The First-Time-Buyer Tax Credit: This tax credit has brought a lot of first-time buyers into the market, and not surprisingly, they are looking at "starter homes", condos, or town houses, which are generally smaller.

Does a smaller house make sense for you? Well, selling your existing house to "downsize" probably makes no sense, as the transaction costs (10% or more) will dwarf any real savings. But if you are moving anyway, you should look at housing size critically.

In many markets, Real Estate Agents like to tout the number of bedrooms available. If your house has five bedrooms, it will sell more readily, at least in the past. Size was king, and for a long time, the bigger the better. The theory was, if someone wanted five bedrooms, they would not look at your house, but if someone wanted only three, they'd take five. So more space meant a larger market.

And that's why looking at a smaller house makes sense. If you can go against the trend and buy what others are (irrationally) turning their noses up at, you can make out like a bandit.

For example, if you want to buy a high-end motorhome, for cheap, look for one without the ubiquitous slide-outs. Dealers say "everyone wants a slide-out, you can't sell a unit without them" and in this manner sell leaky, cranky, heavy slide-outs to people who don't really want or need them. And people turn away from roomy coaches because they don't have a slide-out. Which is better, a 40-ft motorhome without slides, or a 25 foot "shorty" with three?  In terms of usable space there really is no difference.

So if you look at your real needs, you may find that smaller works for you. If your existing house has rooms you never or rarely use, perhaps you could get by with a smaller home. Do you have a "formal" dining room and "formal" living room that are rarely used, except for special occasions? Do you have "Guest rooms" for visitors that rarely arrive? (hint: Motels make much more convenient "guest rooms" for everyone involved). Do you have a finished basement that is empty except for boxes of things? Do you have rooms that have little or no function other than as rooms leading to rooms?

I see many older couples, empty nesters, childless couples, and the like rattling around in these huge houses. Grandma is convinced that all the grandchildren will visit at once, and she'll need three guest rooms. But they rarely visit. And in many cases, such visits would go much better if they stayed in a nearby motel. (See my posting, The Parent Trap).

Now, of course, there are situations where a smaller home may not make sense for you. You have four children and another on the way - that's a bad time to think about downsizing. And as I noted before, selling a house and buying smaller makes no sense if the only reason is to downsize - unless you plan on staying in the new house for 5-10 years or more. The transaction costs of selling and buying a house can dwarf any savings. Of course, if you bought a million-dollar mini-mansion and can't afford the mortgage, perhaps downsizing is the answer. Some of us will have it thrust upon us.

My personal goals are to downsize over the next decade. We own a lot of home and a vacation home, and both are arguably larger than we need. We will drop down to one home in the next decade, and then perhaps eventually go smaller than that. We have made good money in Real Estate and it has been enjoyable, but "hanging on" to any possession out of pride is always a huge mistake. It is better to move on and experience new things in life than to stick yourself with decisions made decades ago, merely because you are afraid of change.

Many retirees find a simple park model unit (a specialized form of RV that is not meant to be moved) is more than adequate for a vacation home or retirement home. There is less to clean, less to maintain, and less to worry about. So you can concentrate on enjoying your life, not tending to lawns, fixing toilets, or worrying about tax assessors, mortgage payments, and replacement cost insurance.

And we all downsize over time, whether we like it or not. Whether it is being shuffled off to the retirement home or leaving the world in a six-foot box, we will end up shedding possessions eventually.

Owning things can be a burden. Making do with less is often liberating. I'd rather DO things than OWN things at this point in my life. I suspect a lot of others feel the same way.
Newer Post Older Post Home