Should You Buy USED TIRES? Probably not. 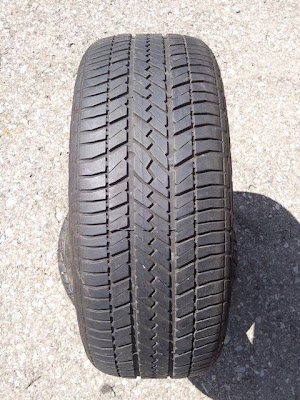 In every classified ad section, someone is always selling used tires. And in every poor neighborhood, there is usually a used tire store. Usually, these are bad bargains.


Tires are like a roll of tape. Quite literally. As explained to me by one of my professors at General Motors Institute, when you drive your car, you "unwind" your tires, leaving a thin layer of rubber on the road as you go.

Eventually, like a roll of tape, you reach the core, and you throw that away. A bald tire is worth nothing.

In fact, a nearly bald tire is worth nothing, too, as you need to have 2/32" of tread for a tire to be legal. A tire with 3/32" of tread is only a few hundred miles from being replaced - and probably not safe in the rain.

Compounding this is the mounting and balancing costs which are not trivial. Most shops charge $10 to $20 to mount and balance a tire. Particularly when they are not the one selling the tire, they need to make money to recoup their labor costs and also cover their liability.

If you pay 50% of the cost of new tires for tires that have half their tread life left, then you will end up paying twice as much for mounting and balancing, to get the equivalent tread life as you would out of a new set of tires.

So you are, in effect, paying more for used tires than you are for new ones. This makes no economic sense, which is why stores like this (and people selling used tires) proliferate in poorer neighborhoods.

The only exception to this rule is "Take-Offs". These are tires that were removed from new cars so that the owner could put fancy aftermarket rims and tires on (see my posting on Bling Rims). We call these people fools. They are removing hundreds of dollars worth of new tires only to sell them for less than half the cost, so they can have something fancy.

But often, used tires are a bad deal, as the person selling them or the store who deals in them, overprices these items. People assume they are getting a "deal" because they are used tires, but they fail to check out prices on new tires and "do the math" on mounting and balancing costs, and thus make a poor economic choice.

Note that cheap new tires are often the same bad deal. A good set of tires, like Michelins, may have a tread life warranty of 60,000 miles. That is staggering, considering how quickly tires wore out just a few years ago. Yes, they are more expensive tires, but when you throw in $100 in mounting costs, buying two sets of "cheaper" tires ends up costing more.

And better tires handle better, are quieter, and ride better. So often, when you buy the latest Asian off-brand, you live to regret the decision, and you are stuck with the decision for at least 30,000 miles, until they wear out.

Finally, tires are nothing to go cheap about. If you don't have sufficient tread, your car is more likely to get stuck or get in an accident. Tires are the major part of your braking, handling, and suspension. Tires with little tread left are dangerous in the rain and useless in the snow. You are literally gambling with your life to save a few bucks. And some used tires may have hidden damages and other problems you may not be aware of.

UPDATE:  While the used Michelins looked good, they were old and dry-rotted.  They were hard as a rock and cause the car to vibrate and shimmy.   I replaced the ball joints and tie rods, had the front end aligned, and still the car shimmied.  I changed the tires and the shimmy went away.  Older tires get HARD and then flat spots set in, causing shimmy, usually between 55 and 60 mph.  Used tires, as it turns out, were no bargain here!

UPDATE:  Again, while I did get a few miles out of those tires, they also hardened like a rock and guess what happened?   Shimmy.   This time around, I knew what the cause was, however.   Just say "No" to used tires!

Thus, it pays to check the age of used tires as well.  Usually there is a date code on the tire.   Oftentimes, people leave old tires laying about in garages, basements, and attics, for several years, before deciding to sell them.  By the time you buy them, they may be hard as a rock, and thus vibrate and ride like Fred Flintstone's car.  They may also dry-rot and blow out.  Tires over five years old are suspect.  Tires over ten years old should be thrown out, in most cases.

But as you can see, the amount of money "saved" is not all that great. And unless you are savvy about cars and tires, chances are, you'll get taken.  And the safety issues sort of seal the deal, at least for me.

So I would put this one down as "Probably Not" for most people.   Even when I have paid trivial amounts for used tires, they ended up not being real bargains.
Newer Post Older Post Home