Do You Really Want Hydronic Heating?

Hydronic Heating is complicated, expensive and a nightmare when it ages.

There are some advantages to Hydronic heating of course. But I think these are overstated:

2. Warm Floors: You can heat using baseboard hydronic (sometimes called baseboard hot water) or with through-the-floor hydronic heating. The latter was hyped heavily on "This Old House" in the 1980's and 1990's which is when a lot of these systems were installed. Do you really get "warm floors"? Well, they aren't cold, that's for sure, but they aren't toasty warm or anything. The big disadvantage of this type of heating is that you can't "spot heat" to warm the house on cold mornings. If you turn on the floor heat, it heats the house all day. Even in the dead of winter, this often means the house is overheated during the day and underheated at night, as the system has a very slow response time. In Spring and Fall, you either freeze or roast.

3. Makes Hot Water, Too! Yes, the misnamed "boiler" (more on that later) will also make your domestic hot water. Not very efficiently, as it has to heat the water through a heat exchanger. Plus, this means the "boiler" runs all summer long to make your hot water. And that means a warm basement. So if you have A/C, it will run longer to cool off the house, due to the heat generated the boiler. Not efficient, not smart.

4. Heat with Wood: You can tie in an outdoor wood furnace in to a hydronic system and heat with wood. All you have to do is go outside two or three times a day and load the wood furnace with wood. The neighbors love the smoke, by the way. Makes your house look like a smokey crash site. Wood furnaces cost staggering amounts of money - $7000 and up.  Some as much as $15,000.  The "savings" in heating bills take years to rationalize, perhaps decades.

5. Doesn't dry out the air: Some people complain that forced air heat dries out their house in the winter. Hydronic heating is touted as keeping the house humid (and if you break a pipe, it certainly will!). However, you can add a humidifier to a forced air system for less than $100. It's been done. And as for dust, at least a forced air system has a filter to capture dust. With hydronics, the dust just settles everywhere.  Note:  This site claims that hydronic heating does not make a house drier or more humid than a forced air system, and dismisses this claim as a "myth".

OK, so the advantages of hydronic heating are not all that great. The disadvantages? There are so many, where do I begin?

1. Cost: Running all that piping costs money, and copper ain't cheap. The floor piping is plastic. Um, more on that later. Labor to connect all these pipes isn't cheap, either. The boiler, controls, circulation pumps, and associated hardware are far more expensive than a cheap gas furnace.  A typical hydronic system can cost three times or more than a gas furnace.   If you add a forced-air A/C system as well, the costs get even crazier.

2. Efficiency: The "boiler" is often an actual a boiler, but running at below boiling point. So it runs in an inefficient range. Some folks replace the boiler with a special condensing hot water heater, which sort of makes sense. But such hot water heaters are very pricey - like $6000 or more.  Even a simple boiler can cost a few thousand dollars - and last about a decade before rusting through.

3. Boilover: If the boiler DOES boil, it can damage your pumps and plastic piping. Boilovers can occur if the system runs low on water (more on that later) or if the control unit fails.   We lost six brand new pumps in a boilover incident. $300 each.

4. Water, water, everywhere: These systems, particularly the in-the-floor heating models, run pipes all over your house. What could go wrong? Leaks for one. A freeze for another. Pipes get old and leak. With plumbing that is a problem. With a hydronic heating system, it is a nightmare as there are basically pipes in every single wall, ceiling, and floor. If a pipe breaks, it will dump rusty brown water all over your house, and the take-up water will continue to re-fill the boiler and flood the house. You'll never have this problem with forced air, which when it leaks, leaks air.

5. Aging and Replacement Cost: Unlike a gas furnace that can be replaced easily and cheaply, hydronic systems require regular maintenance of their many parts - boiler, pumps, controls, etc. And when it all needs to be replaced, the replacement cost is staggering.  Few companies work on these systems, so your options are more limited.

6. Hard to do A/C: A gas furnace can be retrofitted with an A-coil in the plenum. Put an outside compressor and condensing unit and Voila! You've got central air! Not so with hydronic heating. Adding ductwork to an existing house is nearly impossible, without a lot of work and sacrificing a closet or two. One neighbor installed hydronic heating in their new home AND ran the ductwork for a heat pump. My question: Why bother with the hydronic if you have a forced air system as well? It's like paying for two HVAC plants - effectively doubling your installation costs.

7. Freezup: If you lose power in an ice storm, the system will shut down. If you are running water in the system, the pipes will freeze, flooding the house and ruining everything you own and destroying the system. Fun, eh? Regular plumbing can be easily shut off, blown out, and winterized. Winterizing hydronics is not as easy. Many run anti-freeze in their systems, but it degrades performance somewhat.

My experience with Hydronic Heating:

Our Lake house came with hydronic heating. The system was 15 years old. There was one split-system A/C unit in the house when we bought it. I quickly had to add three split-system A/C units and two portable A/C units to air condition the house. The split systems and one of the portables are heat pumps, and we find that they work well for taking off the morning chill or making the bedroom warm at night. We never use the hydronic heating in the Spring, Summer, and Fall. But the boiler ran all the time to heat domestic hot water. 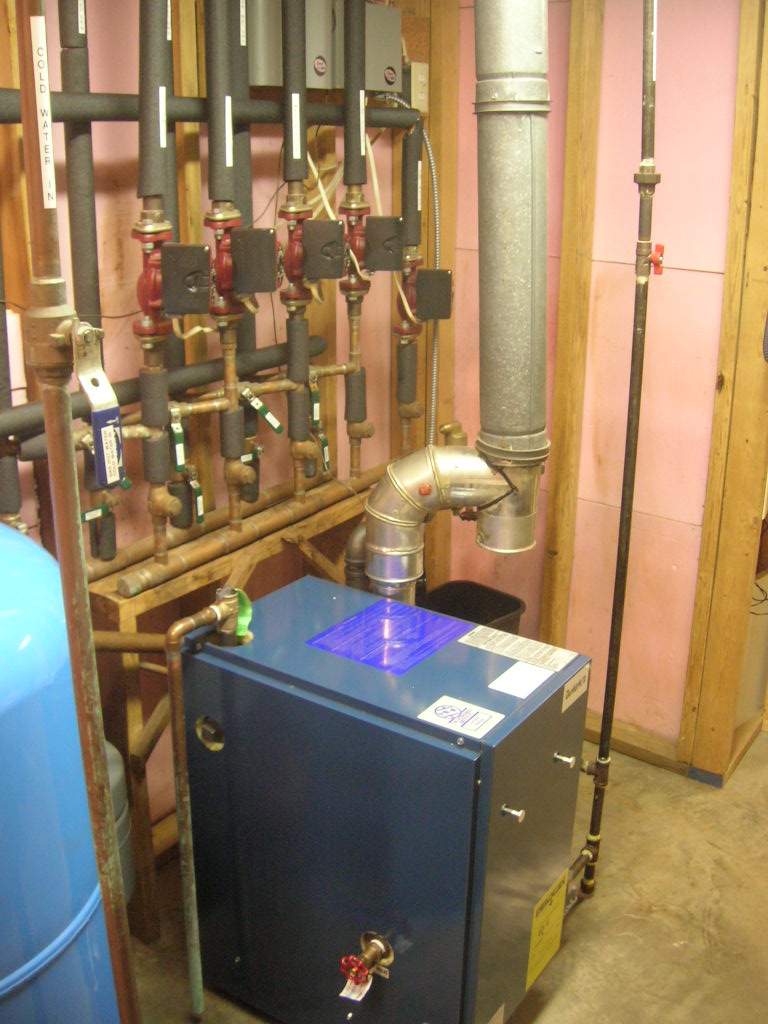 Our boiler room.  It was very fancy looking, but also very complex.  I was lucky that I had a friend who got me a replacement boiler for $1500 wholesale ($3000 retail) and that I installed it myself.  The local HVAC guy (the only one who worked on hydronics) wanted close to $5000 for the job.  Each of those circulation pumps was $300 and all five had to be replaced.  Due to a boilver problem (caused by a broken controller) they had to be replaced again.  The boiler is cast iron and rusted out in about 15 years.  Hard water is problematic with these systems.  I would highly recommend using anti-freeze as it includes corrosion inhibitors.

The boiler warms the basement, which makes the A/C unit there work twice as hard. And it is not very efficient for making hot water. This year, we installed a 50-gallon electric hot water heater. This allows us to shut off the boiler in the summer and save on energy, as we are not paying to cool off the basement while the boiler heats it.

One pipe burst in the ceiling this year. Hopefully this is an anomaly and not a sign the entire system is ready to fail. If an in-floor hydronic system starts leaking a lot, the only way to fix it is to tear out the whole ceiling, remove the insulation, and re-install all the piping. Fun, eh? Even repairing a "small" leak requires tearing open the ceiling to get at it.

Many folks, when confronted with this problem, convert to baseboard hydronic heating, as it involves a lot less plumbing, and soldered copper is less likely to leak down the road than all that plastic piping.

We replaced the boiler this year as well.   They are made of cast iron and rust through in about 15 years. Ours is over 15 years old and has started leaking. Newer ones are made of aluminum or stainless steel. But even then, they wear out. The cost of replacing it is higher than replacing a gas furnace. Since they are not as plentiful as gas furnaces, they are plenty more expensive.

We plan on running the system with anti-freeze as well, so we will have the option of leaving the house "cold" in the winter while we are away.  Many folks leave their hydronic heating systems "on" while they are away, convinced that it is "safer" to leave it running than to risk a frozen pipe. But if the hydronic system breaks a pipe, it will pump your house full of water. A winterized plumbing system, shut down, might freeze a pipe, but since it is OFF, the damage is limited to one area.

So, do you really want hydronic heating? My answer would be "No" after owning an older system. The touted advantages of the systems are over-stated and the costs and disadvantages far outweigh them. If you are going to install A/C anyway (which even in colder parts of the country, is becoming a reality for most houses these days) it is simpler and cheaper to just go with a forced air furnace as a heating source than to dick around with miles of tubing and a boiler.

But, the choice is yours. Pardon me while I go mop up.....
Newer Post Older Post Home