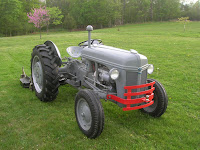 I have listed this tractor on eBay, and after three listings, it sold. But in the meantime, I had every sort of yahoo wanting me to "end the auction early." Don't fall for that!


When selling something on eBay, you are contracting with the eBay auction service to list your item for a fee.  When the item sells, you have contracted to pay eBay a final value fee for the sale.  It is a simple contractual agreement. If you violate the terms of the contract, well, that is cheating.

Don't cheat. It's bad. And bad things happen to people who cheat.  The temptation to think you are clever and can get ahead in life by cheating is great.  After all, it seems like everyone who gets ahead cheats. But in reality, when you cheat, or try to cheat, most times you end up getting burned - and not because you get caught cheating, either.  Remember, the greatest cons are based on making the "Mark" think he is cheating.

The Nigerian scam is a classic example.  The victims think they are getting involved in an illegal money laundering scam and then cry "foul" when they are conned out of their life savings.  Hard to feel sorry for someone who thought they could make millions in money laundering, isn't it?

So when someone asks you to cheat, chances are, it is because they want to cheat YOU.   Keep that in mind at all times - in with regard to all aspects of life, not just eBay.

But getting back to eBay, when you sell an item, you may be contacted by people who ask you to "end the auction early" and then sell them the item outside of eBay. They will tell you that instead of risking the item not selling at auction, or selling for less than you'd like, you can get a "sure thing" by selling to them directly.  Or, they argue, you could sell to them and avoid paying eBay's final value fees.  Don't fall for this scam.

To begin with, it is cheating.  And you have to ask yourself, the fellow who is asking you to cheat the system, is he all that honest?  If he is proposing you cheat eBay, then you really have no cause to complain when he cheats you.

eBay originally was founded on the honor system, and to some extent, it still works that way. You buy something online and then hope the people send you the goods.  In the old days, doing things that were not Kosher was considered to be not "eBaysian".  Today, most users don't understand what that term means.

It meant you didn't misrepresent your goods.  You didn't bid and then not buy. You did not withdraw items from an auction when it didn't meet your price.   And you didn't cheat eBay, either.  Today, as eBay has become more popular, more people who never were there during the earlier days have no clue about proper etiquette.  So they think of eBay as a classified ad system, where you find a product, ask them to end the auction early, and then buy it outside the system.

Well, to begin with, a lot of frauds and con artists try to use eBay as a means of snaring victims and then attempt to consummate the transaction outside of eBay to avoid what little checks and balances there are. So when someone says "I have a car for sale, but if you send me the money by Western Union, I can avoid paying the eBay final value fees" watch out, because they likely are a con artist, and there is no car. You send the money and that's it. You are out the money and you have no recourse.

When selling, similar things can happen, but not necessarily from professional con artists. For example, one persistent fellow kept e-mailing me and saying "End the auction early and I'll drive up and pay you $3000 for the tractor!" So, you say, what's wrong with that?

Well, typically, the way these deals work, if you fall for them (and I haven't, thank you) is the guy shows up and then says "Well, there's a scratch on this side you never mentioned. I'm not sure I want it anymore!"

So there you are, having ended the auction, wasted a week on the market, and no buyer.   But of course, the guy will say, "But, I'll overlook the scratch if you drop the price $500."

And that was the gag all along. They want to put you at a disadvantage and then take advantage of you.

Another fellow wanted me to "end the auction early" and then "meet him halfway" in Pennsylvania. Talk about a disadvantage.   After driving four hours (and renting a trailer) I end up meeting some Joe in a parking lot in PA, only to have him try to haggle me on the price.  Since I have so much invested in driving there, I would be motivated to fall for his machinations.

I told both "buyers" that if they wanted to bid on the tractor, then bid.  Play the game by the rules, not make up new ones as you go along.  Of course, both "buyers" had ZERO feedback, meaning that they never had done a deal on eBay.   And I programmed my auction sites to not accept zero feedback bidders.

And the funny thing is, in every case where someone asked me to "end the auction early" and sell to them for a fixed price, that person never bid on the item - even when it eventually sold for LESS than what they proposed to pay in the proposed outside-of-eBay transaction. What does that tell you about their real motivations?  Volumes!

In other cases, I have had people e-mail me telling me an item was "overpriced" but that they would "do me a favor" and buy it for less than the minimum bid, if I would "end the auction early". These types of people are like the "early birds" at garage sales.  They prey upon your insecurities and try to buy things for below market value by implying that they will never sell otherwise.   "Sell it to me now," they are implying, "or lose your only hope of ever selling it!"

Again, the best solution is to "Stay the course" and go through the normal channels of commerce. Rigging all these outside deals is just not worth it. They become complicated and difficult, even if the buyer is "honest" (a word I would use with trepidation) as you can't use PayPal and the other normal means of completing the transaction.  From the standpoint of "Hassle" alone, the "end the auction early" deal just isn't worth it.

I re-listed the tractor, each time dropping the price $500. It finally found bidders, perhaps not at the price I wanted, but at a respectable amount.

I listed the tractor and mower together, and in retrospect, I probably should have sold them separately. Some folks were interested in the tractor, others might want a mower. Selling them separately targets larger markets for both and generates more money.   Something to bear in mind when selling items that contain multiple components.

I also went on some tractor websites and posted links to the auction. This is probably a little cheeky, but it does generate interest. If you are selling an Alfa Romeo, putting a note on an Alfa website might generate more traffic for your auction. But, beware - many such discussion groups, etc. frown upon such postings. You may get some flames on the message board. However, since you are selling your Alfa anyway, chances are, you won't be visiting the message board ever again. And if it sells your Alfa....

eBay is a great way to get rid of things you are no longer using - converting physical assets to cash, which can, in turn, be converted to things you need. It is not a way of "making money" unless you want to make a business of it. But if you have things of value you want to get rid of, it is a useful place to convert them to cash.

UPDATE DECEMBER 2015:  I have sold a number of boats, cars, campers, etc. on eBay and every time, someone early on asks to "end the auction early" and offers a low-ball price.  In some instances, I have ended up getting more than three times these offers!

There is a pattern to these people:

1. They send endless e-mails asking for more information - information that is often in the listing.

2.  THEY NEVER BID ON THE ITEM

3.  They tell you that you are asking too much or ask "what would you take to end the auction early?"

In many cases, these are Nigerian scammers, who want you to "end the auction early" send you a forged cashier's check for more than the sale amount and then have you wire money to someone else.  You end up not only NOT selling your car, you are now out the $3000 you wired to a "shipping company" that doesn't exist.

The "end the auction early" people are either scam artists or just want to get you to sell cheaply.  Bear in mind that bidding really doesn't heat up until the last day of the auction, often the last MINUTES.  Just because the bids are low after day 1, doesn't mean it won't sell for a good price.
Newer Post Older Post Home