Should you buy from QuiBids? Hell, No. 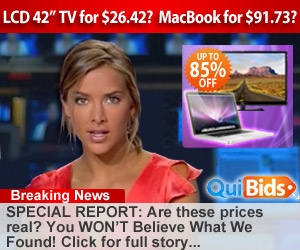 Not a day goes by when someone "entrepreneur" comes up with a new way to make money off the Internet. Penny auctions are the latest gag. Quibids and Swoopo are examples of these "auction" sites, and chances are, you've seen their ads on the Internet.  Note the use of the "fake news report" to advertise the site.  Sort of says it all, don't it?


As I have noted before in this blog: The more complicated you can make any business deal, the easier it is to rip off the customer. If you can take a simple transaction and make it tremendously complicated, so the buyer doesn't know the real price of the goods, and moreover, how much they are spending on it, you can rob them blind.

Now by "rip off" or we don't mean stealing or fraud or other criminal acts, just a raw deal - buying something for a price far over its actual value.  Quibids is a bad bargain, at best, perhaps gambling at worst.  And in my mind, gambling is only for fools.

Penny auction sites charge you a fee, usually 60 cents, per bid to bid on an item. Each bid only incrementally increases the price of the item. So you can see, if a 100 or 1000 people bid on an item, it goes up only a few dollars in value (or a few hundred) but the auction site rakes in a lot of money on the "bids".   If you win, great. If not, you are out all your bidding money.

Ridiculous?   Yes.  And yet people will try anything these days.  Even Russian Roulette.

In the case of these "penny bids" deals, you are paying for the privilege of bidding.  Since the "winner" of the product is the "last bidder" there is a lottery-like aspect to the bidding.   Whoever gets in the last bid on an item wins.  And since the "bids" are far below retail (or even wholesale) the "winner" really is a winner in the lottery sense.   One guy gets a great deal, and everyone else is 60 cents poorer.

And when does the auction end?  When people stop bidding.  Each bid extends the auction by a few more seconds, so you can't "snipe" on Quibids if you tried.  In fact, it is impossible by definition.

So the prices of the items are ridiculously low.   A camera for $3, an iPad for $20. If you could "snipe" an item with one bid, then yes, you get a good deal.   But since your bid extends the auction, sniping isn't possible.  Anything else, you are just spending 60 cents to incrementally advance a price that is just a nominal placeholder for the item, not an actual reflection of its market value.

The bidding scheme is complicated and it is not a real auction. They make money selling "bids", and the person getting the product is the lucky winner. The rest go home having spent money on something they don't own.

In a way, your fellow bidders are paying for your product.   In a way, it is like playing a slot machine.  It is basically gambling.

In terms of an efficient way to buy products at competitive prices, it doesn't strike me as a reasonable way to get a bargain.

Like WOOT! and other sites, these types of sales make more of the PROCESS of buying than the actual transaction itself.   People get caught up in the hoopla of the "auction" and then fail to realize they are spending more than they should.

At least with WOOT! the deal is pretty basic - here is our junk, here is the price, here is the shipping. You want it?  Buy it.  If not, don't.

But with penny bid auctions, you never know what the price is, and in most cases, you'll end up paying for the privilege of bidding on something you'll never own.

The basic rule of thumb is simple: The more heavily advertised, hyped, and promoted any " deal"  is, the less a chance it really is a good deal.

And they are hyping the snot out of these penny-bid auctions.