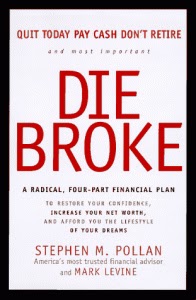 This book sets forth in more succinct terms, what I have been trying to figure out in this blog over the last two years.  But it was written nearly 15 years ago!

One of my readers (yes, people actually read this - amazes me, too) sent me a link to Stephen M. Pollan's book, Die Broke, which I checked out of our local library (for free) rather than spend $10.99 to download it to my Kindle on Amazon (Sorry, Mr. Pollan, but you understand).

I opened the book and this quote jumped out at me in the first few pages:

"...sometime during the past few years, we all fell into that same kind of trance about our economic lives.  Except now we've snapped out of it and everything's not okay.  In fact, everything now seems precarious and frightening.."


"All of a sudden your job is temporary no matter how long you've held it, how hard you work, or how good you are at it.  In the blink of an eye owning real estate in some cases has become a curse rather than a blessing.  What was once going to be the key to your long-term financial success now seems an albatross around your neck.  Credit, once your lifeblood, is now hanging over your head like the sword of Damocles.  Retirement, which you once thought you 'd reach in middle age, now seems impossible.  And estate planning  Hey, it looks like the kids will be lucky if you can help them pay for the tuition at the local community college, let alone pass on wealth."  --Stephen M. Pollan, Die Broke

I was stunned.  This was written in 1997 not 2009.  Mr. Pollen saw our present economic situation coming, many years ago.

And the premise of his book is very similar to what I have been trying to deduce, the hard way, in the last two years.  Mr. Pollen describes his clients as wealthy people - making six figure salaries - and spending it all as fast as they make it.  They have chained themselves to a money machine, needing tons of money to pay all the bills they have created in their life.

But there is another way, of course, to live more simply and not view work as the centerpiece of your life - and a huge salary as essential to maintaining your standard of living, as well as the need to invest millions of dollars (literally) to maintain such a standard of living in retirement.  And that is what I have been trying to figure out here, and it turns out, someone much smarter than me (not hard to do) has already written a damn book about it.  15 years ago.  Oh, well.

I recently finished reading Christopher Buckley's Thank You For Smoking, which, while nominally an anti-tobacco screed, ended up making me more sympathetic for the cigarette companies (disclaimer, I am a shareholder in Altria, and it pays a nice dividend, thank you - and keep smoking!).  But what struck home about the book was the principle character's motivation for representing the tobacco industry.  "I've got a mortgage to pay" was his lame excuse.

Yes, a mortgage, and child support, and an expensive lifestyle of his own.  And for this reason, people do odious things - so they can pay off their debts.

I reported recently about health insurance, and what motivated me to write that piece was a friend of mine, who is convinced he needs $3000 a month in prescription drugs.  He takes diabetes medication so he can scarf down doughnuts and soft drinks.  Perhaps I am naive, but I would think a diet change would be the first order of business.  Or a good slap, perhaps.

But he has let slip to his employer that he "needs" his health insurance, and as a result, they have started abusing him - a little at first, but escalating over time.  They know they have a captive employee here, and, well, why not have fun with him?  His nuts are in a jar, in their office.  And he has to ask permission to use them on occasion.

As I have mentioned before, the most expensive thing in the world you can purchase is yourself.  Being truly free means not being beholden to anyone - having the ability to say "fuck you" to anyone - even your boss - if the circumstances dictate.  And what I found in my personal life was that debt and the need for money in my life - created solely by my own needs to have "things" - made me dependent on a whole host of very unreliable and unsavory people, who were more than willing to keep my nuts in a jar in exchange for throwing me a pittance now and again.

If you look at all the odious things that happen in the world - everything from the toxic leaks in Bophal, India, to Germans who were "Just Following Orders" - the common denominator was "I've got a mortgage to pay".   People feel they can't rock the boat or stand up for what is right, because they are beholden to others.

But the opposite is true.  People who shackle themselves to a cubicle or desk should really be ashamed of their lack of ambition and also their selling of their souls for a leased car, cable-TV and takeout pizza.  And people who have the courage and ambition (and vision) to say, "working at a job is really a dead-end" should be lauded.  But such is not the case.

Yes, there are some of us who become careerists and end up successful and famous - Supreme Court Judges or whatever - and be lauded at their funerals for their great contributions to mankind.  But even careerists can sometimes discover that what they sought in life didn't quite work out the way they planned - even if they accomplished a lot.  Robert Evans, for example, is a cautionary tale of how a wildly successful career can go horribly wrong.

I hope to write more about this book once I finish reading it.  But so far, it seems pretty spot-on to my current philosophy.
Newer Post Older Post Home