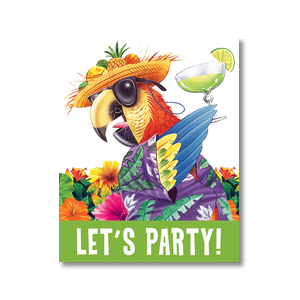 Many cubicle-dwellers adopt the so-called Parrot-Head lifestyle - or at least yearn for it.   What is this all about?  And it is little more than a marketing ploy?


First, let me make a disclaimer.  I own a number of Tommy Bahama Hawaiian shirts.  It is my one sartorial weakness.  But a nice Hawaiian shirt, made of pure silk, is a beautiful thing to behold.  And a well-made Hawaiian shirt will have the pattern match where the buttons in the front meet - and on the pocket.  I have about a dozen, and it pretty much is what I consider my leisure clothing, my "work" clothing, and even my formal clothing.  Hell, I even wear them to funerals.

But all that aside, many folks like to embrace this so-called Parrothead lifestyle - drinking sweet tropical drinks on sandy beaches on warm sunny islands.  Well, that is the fantasy, anyway, and an army of marketers is ready, willing, and able to sell you  a whole host of products based on this fantasy.

Corona, for example, pitches its beer as an island-beach-fantasy getaway, even though most of its brew sold in the US is consumed at home, or in a sports bar.  The idea of sitting on an empty deserted beach and tossing your cell phone in the ocean is what they are really selling, of course.

Jimmy Buffet, Incorporated, is, of course, the major marketer of the Parrot-head lifestyle, and his fans even call themselves "Parrot-Heads" - even though few of them are ready to chuck their cubicle jobs and move to Key West full-time.  Buffet, in addition to selling albums and touring, has his own line of beer (trying to take a slice of the Corona market), Tequila, and of course his infamous restaurants.

Not a day goes by that some bonehead decides to open a bar and call it "Margaritaville", thinking it is a swell idea.  And not a day goes by that Mr. Buffet's attorneys don't send out a cease-and-desist letter.  While Jimmy Buffet may play the role of the laid-back derelict, playing guitar in a downtown Key West bar for tip money, he actually is at the head of an enormous marketing and branding empire, and is anything but laid back when you allegedly infringe one of his Trademarks.

Now of course, I am not taking a piss on Jimmy Buffet - he has every right to create a media and marketing empire and make a lot of money.  And he has a right to enforce his intellectual property rights as well.  And he has made a gazillion dollars at it, too.  His fleet of airplanes alone, is a staggering monument to the success of his branding.

No, I am taking a piss on the fans here - people who think they are being original or "laid back" by attending a Jimmy Buffet concert, drinking LandShark Beer, Margaritaville tequila, and eating a Cheeseburger in Paradise at one of his many Margaritaville restaurants.  This is hardly a real lifestyle, but rather sort of aping what they call "Conch" life down in the keys, by buying the lifestyle off-the-rack.  It is akin to going to Epcot center at Disney World and saying you've had a European vacation.  It is, to some extent, not real.

While Buffet may have started off as the laid-back conch type, I think today, he is more of a marketing machine and branding machine.  Yes, he is a talented songwriter and great performer.  But I am not sure that where is he today is really the spirit of what it means to be "Wasted Away Again in Margaritaville".
Michael McCloud is probably more of that sort of performer, and he still performs at the Schooner Wharf Bar, in Key West, and has yet to have branded his own tequila or beer.

But the parrot-head "lifestyle" goes beyond merely Jimmy Buffet.  It represents a fantasy that a lot of Americans share - the idea of a laid-back life on the beach, sort of like a cross between Beach Blanket Bingo and Magnum P.I.   And perhaps those two references illustrate that the Parrot-head lifestyle dates pretty far back in our culture.

And there is nothing wrong with it, of course.  I live on an island and pretty much go to the beach every day.  And it is nice, too.   But I am not merely buying a roster of products pumped out by an industry ready and waiting to sell them to me.  Buying a Corona beer (or Land Shark) doesn't make you any more of a Parrot-Head or whatever.  It just makes you a customer.  And oftentimes, a customer of very mediocre products.

Many tourists come to Key West and have a Cheeseburger in Paradise at Jimmy Buffet's Margaritaville restaurant.  No offense, but it sucks.  Even the Margaritas suck.  There are a lot of great places to eat in Key West, Margaritaville ain't one of them.  Besides, your local mall probably has one.  Why not try something different?  But most folks don't, and convince themselves they are experiencing an "authentic" Key West experience, and not some chain restaurant.

So what's the point of all this?  Nothing.  Other than I think it is important to understand when you are being manipulated and marketed to.   Aligning yourself with a brand or lifestyle is problematic, as it induces you to spend on things you might not ordinarily buy.  If you work in a cubicle, great.   But don't kid yourself that you are one weekend away from becoming a beach bum.

In a way, it is like these idiots I see up North, with confederate battle flags on their pickup trucks.  They have no clue what the symbol means, and it is somewhat ironic as they drive by the Civil War memorial in their hometown in Vermont, with rebel-yell decals all over their car.  They are buying a brand or an image, and yet have no clue what it is they are doing.

You are more than the products you select, or at least should be.   Aligning yourself with a brand, be it Chevrolet, Harley-Davidson, or Jimmy Buffet doesn't make you original or unique.   It just makes you yet another mindless consumer of products - a person who has been marketed to and whose wallet has been cleaned out.