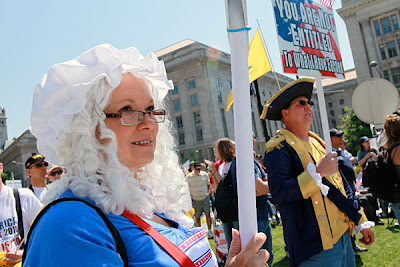 What's the difference between a Tea-Partier and an Occupy Wall-Street Protester?   There isn't one.  Both are groups of people desperately trying to externalize their own problems.

In any situation of economic stress, many folks will try to externalize their own problems as being the fault of someone else.

In debt up to your eyeballs with student loans?  Not your fault, of course.  They put a gun to your head and said "sign here" - and again, it was those "Wall Street Fat Cats" (WSFC) who were behind it all.  Hey, you had four years of smoking pot before Psychology class - plus all those drunken frat parties.  Who knew it would be so expensive to pay for later on?

Of course, some folks argue that people are real victims here.  After all, whose fault is it that they get laid off?  Hey, if you have obsolete job skills, are overpaid by a factor of three, and don't bother to save a penny for the inevitable day your cash-hemorrhaging plant finally creaks to a stop, whose fault is that?  WSFC - at it again!  They "shipped your job overseas" so they could greedily swim in a pool of money like Scrooge McDuck, right?

You see, the "greedy" ones are the folks in line at the checkout at Wal-Mart.  Folks like you and me - heck, folks who ARE you and me - wanting more products for less and less money.  And we are getting just that.

Look back historically at prices of even simple consumer goods.  My Dad bought his first color TV in 1975 (!) because the thought they were "too expensive" before then.  Back then, a 25" RCA Colortrak (the State of the art) was over $500.  Today, that $500 would be about $1575, and it would buy THREE flat screen LCD sets with better resolution and a larger screen size, and leave some change left over.  Few people, if given the choice, would be willing to pay union wages for a "U.S.-made" television, particularly if it cost 2-3 times as much as a foreign make (and trust me, it would, and it would break in a week).

And that is the conundrum with these protest movements.  What they are protesting is, in essence, their own malfeasance.  Tea Partiers want a balanced budget AND their taxes cut.  They say "cut the waste in government spending!" and in the same breath say, "But don't cut MY Social Security, Medicare, or Defense!" (which combined, make up more than half our budget).

Wall Street Protesters want Student Loan reform, but are unwilling to attack the problem at its source - the Dean's Office.  Skyrocketing tuition is the problem, not nefarious student loan schemes.  And God forbid if you should slap an import duty on their Subarus or Priuses.  Right?

When you press the Tea Partiers and Occupiers for specifics as to what they are protesting against, you come up with, well, nothing.  It is like shoveling water.   Nearly every member of each movement has their own agenda, and in fact, both movements have overlapping agendas.  For the most part, however, it is simple unfocused rage - an outlet, an expression, and perhaps a chance for a good party.

As I have noted time and time again in this blog, however, protesting greater events in the world, while it may make you feel good momentarily, will not likely improve your own bottom line.  Far too many people in this country already have externalized their problems - it seems a shame to nurture a new generation on the same schtick.

The stoner/slacker will regale you for hours with this stuff.  "If only Bush was out of the White House!" they say, "I could get my life together".  Hey dude, you need to get out of Mother's basement more often.  Bush has been gone three years, now.

With these sorts of people, it is always one outrage after another - and one excuse after another why they personally cannot succeed in the world.  It is not that they won't get their hair cut or remove their piercings for a job interview.  No no, it is the International Monetary fund that is the culprit.

And yet, even in an era of "severe recession", most people are still working and - should I even say it? - prospering.  But those are people who are directing their energies toward work, not protest, toward their own personal situation, not externalization.

Protest is a fine and wonderful thing and all.  But spending hours, days, weeks, and months of your time on a protest is turning protest into a career.  And few people can make a career out of protesting.  Don't confuse noise and light with real action.  Don't confuse a movement with motion.
Newer Post Older Post Home