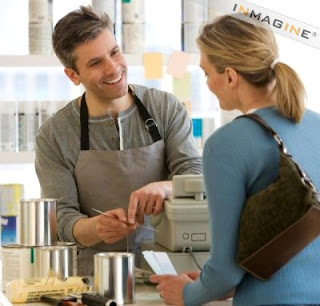 In the future, your Smart Phone may be used for POS (Point of Sale) transactions.  How will this play out?

People often ask me what I do for a living, and I tell them I am a Science Fiction writer.  When they say "Oh, Really?" I reply, "Yes, I write Patents."

It is a bit of an inside joke, as many people accuse the Patent system of allowing people to Patent mere ideas and then sue others, later on, when they actually develop inventions.  And that is true, to a small extent, although for the most part, the system protects the rights of many companies and individuals desperately trying to make a buck the old-fashioned way - developing and selling inventions, not mere ideas.  So yes, there are abuses, but that is no reason to junk the whole system.

More than a decade ago, a friend of mine who works for the largest cellular telephone handset maker (well, they USED to be the largest!) told me about a Patent they obtained that combined the RFID technology of the Mobil "Speed Pass" with the guts of a cell phone.  In the future, he predicted, you could wave your cell phone at a gas pump or checkout counter, and it would debit your bank account or charge your credit card, and display the balance on your card, right on the phone.

Like I said, that was more than a decade ago.   So pardon me if I am not impressed with the latest developments in cell phone technology.  I've already seen it, chances are, years ago, while it was still in the prototype stage.

Within the next few years, though, it appears this fantasy will finally become a reality.  Some folks are calling it the "electronic wallet".  Perhaps by then, the Patents obtained by my friend will expire - or perhaps that now-struggling cell phone maker will be able to salvage some of their R&D expenses by filing an infringement suit, which is how the system is supposed to work.

But it appears that a perfect storm is brewing to make such an idea a reality.  Technology is often the smallest part of the equation.  First, there is a large enough installed base of smart phone users - who are all-too-willing to change phones on a yearly basis.  Second, U.S. retailers are finally willing to invest in new technology, after shunning the previous generation of "smart card" technology that is so prevalent nearly everywhere else in the world.  So this idea might just take off.

The problem, of course, is that it will make buying things even more painless.  Theoretically, you could create a system whereby you go to the store, take an item off the shelf, and just walk out the door with it.  The RFID chip in the item would be logged electronically by store computers, and your smartphone would link with the store computers via WiFi or bluetooth or whatever, and then debit your account.  No cashier, no checkout.  Science Fiction.  See how easy my job is?

But making things easier to buy does encourage shopping and consumption.  And such a system will no doubt be welcomed by retailers as it will make consumers consume even more.

And that, by the way, might be the real answer U.S. Retailers shunned the previous generation smart card technology.  From what I saw of it in Canada and Europe, smart cards tend to discourage consumption rather than encourage it.  Instead of a mere swipe, you have to insert your card into a reader, enter your PIN, and then authorize the transaction.  It actually takes longer than a traditional "swipe" card which is magnetically encoded.

As a Patent Attorney and a futurist, I can see where such technology could be going in the far distant future.  Imagine a future where all your actions, on a daily basis, are logged and given a value.  If you go shopping, for example, your purchases are debited from your account, and this would appear on your smart phone - which you might wear on your wrist like Dick Tracey.

But when you go to work, perhaps this balance amount will increase - for every hour you work.  Rather than get a paycheck every two weeks, you will be paid in real-time as you work.  It would incentivize people to work more, as they could see their net worth increase from minute to minute.

Similarly, the government could use such technology to encourage behaviors and enforce social policies.  If you go jogging or work out at a health club, the "net worth" number on your display might increase slightly, to reflect the social benefit of your maintaining your health (which would reduce medical costs, thus providing a public benefit).   On the other hand, behaviors which are self-destructive or do no social good might be punished.  For example, going to a bar, or drinking too much, might debit your account.

Scary idea, eh?  Well, just wait for it.   Or perhaps you don't have to wait so long.  After all, our current tax code is the carrot-and-stick the government uses right now to get us to do things we might not ordinarily do.  Perhaps the idea is not so far-fetched.

But getting back to the immediate future, while the smart phone payment scheme might have some uses, it will require a lot of discipline to use the "electronic wallet" effectively.  And if apps on your smart phone will not only track your spending - but can be programmed to discourage it as well.  Perhaps Siri or other digital voice assistant could be programmed to make sarcastic comments about your purchases, reading the RFID code and saying "Gee, you really want that?" or "You've got to be kidding me, right?" or perhaps best of all, "The store down the street has this for $10 less."