Drowning in a Sea of Crap! 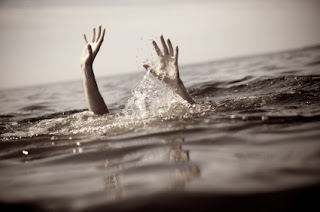 Possessions accumulate over your lifetime.  And oftentimes, the worst things stick around, while the stuff you actually use wears out.  As a result, you end up drowning in a sea of crap.


You know the drill.  It's too good to throw away - might as well keep it.  And hey, I might have a use for that, set it aside.  It was a gift - you can't throw it away, the person who gave it will be offended.  Whoops!  A button fell off this shirt - save it, and I'll sew it back on later.  Just set that aside for the moment.

And that, in short, is how you end up hoarding.  Hoarding disorder is not some weird anomaly that happens to insane people.  Rather, it is the inevitable consequence of living long enough and living in an affluent country.

If you don't think this is true, take a good look in your closet.

Yes, there are about six outfits you wear on a regular basis.  And they are either laying on the chair next to your bed, or are in the laundry.  The rest of the stuff hanging in your closet?  Well, that shirt doesn't quit fit right, but hey, it's too new to throw away!  And that other shirt - well, I can't wear it to the office, and it's too nice to wear while changing the oil on the car.  There will be some undefined semi-casual situation in the future where I will wear it, so don't throw it out!

And those knit shirts.  Yea, I like them, except they are too hot most of the time, or when it is too cold out, the short sleeves don't keep me warm.  So I don't wear them - and they look like new!  So you might as well keep these, too.

And the list goes on and on.  And unfortunately, this is true with all of your possessions.  The stuff you use every day gets worn and broken and thrown out.  Oddball stuff ends up in drawers or on shelves and just cluttering up your life.

You see this effect in museums and antique shops.  The stuff that gets "saved" through the Centuries is the stuff no one uses.  Fancy costume clothing, for example, worn on special occasions, never wears out, so it gets saved in a trunk.  A Century later, it appears on a mannequin in a museum, and the curator tries to convince you that everyone dressed like that - back in the day (And photos from that era seem to confirm this, until you realize that getting a photo taken back then was a big deal, and people put on their fancy dress for the occasion!).   Similarly, gadgets and other possessions that are too fancy or never quite worked right get saved, while simpler, more pedestrian ware gets tossed out when it wears out.

The problem for the individual is that this effect snowballs over time.  As you get older and older, the cumulative effect of decades of living is an attic full of crap.  And since obtaining crap seems so hard to do, it is so hard to let go of things.  After all, that book cost you $25.95!  Why sell it or toss it?  You might decide to read Sarah Palin's "Going Rogue" to your Grandchildren.  Or maybe not.

Avoiding hoarding disorder is not a simple matter of not going insane.  Rather, it requires that you be proactive in taking steps to make sure the incipient first stages do not occur.  And when you see the telltale signs of it creeping into your life - take charge and take action!

Why is hoarding such a bad thing?  Well, in addition to the physical dangers of it (fire, collapse, etc.) there is the mental danger.   Living in a pile of junk isn't fun - and in fact it is downright depressing.  If you are surrounded by crap all day, you will feel like crap.  And feeling like crap is no fun.

1.  Don't "put it aside for later" - do it now.  If you have a button fall off your shirt, sew it on now and get it over with.  Or, figure out that you are not likely, in your lifetime, to sew it back on - and throw the shirt and button away.

2.  Have a place for everything - and then put things away.  And by this, I don't mean tossing things in a drawer or a closet, but rather, have an organized place for all the things you use in daily life.  A vacuum cleaner should not be a permanent part of your furniture - always underfoot.  Put it in a closet when not in use - and buy a hook to hang up the hose if you need to.

3.  Don't create more cubbyholes:  A closet organizer, or cabinet or other storage compartment sounds like a swell idea to get rid of clutter.  The problem with shelves, cabinets, and closets is that they accumulate junk to fill them up.  Joe homeowner puts up shelves in his garage to "neaten it up".  Before a year is out, they are sagging with old cans of dried-up paint and half-used bags of fertilizer (paid good money for that!).  Better off to throw away junk than to store it.

4.  Don't start collections:  A penny jar, a basket full of wine corks, boxes of colorful bottles, or old buttons or whatnot.  People start collecting things on the premise that they are going to start a craft project or whatever.  But what ends up happening is that you end up saving junk.  Put your money in the bank, not a jar.  Throw away old bottles and cans and corks and caps or whatever.  These are not things of value.

5. Don't be afraid to THROW AWAY:  Trust me, the landfill can handle it.  Far too often, we have regrets about throwing things away.  That old shirt can be torn up and used for cleaning rags!  So we tear it up, put it in a bag - and forget about it, as we use some sort of store-bought rag for cleaning anyway.  Before long, we have cabinets filled with "good rags" that we might use "someday".

6. STOP BUYING CRAP!  The more you buy, the more you will have to store, and eventually, your house will fill up to the brim.  Books are one example - you buy a book, read it, and then it sits around.  Only the best get read again and again.  Go to the library for most of your books.  Sell others at a garage sale - or donate them to the library.  Keeping them is just clutter - and no, I'm not impressed with your "wall of books".  I know how to read, too.  I just don't feel the need to show it off.

Gift items are another problem area.  Those little table-clutter items seem so cute.  But you can only have so many of them, before the table can no longer be used as a table.  If every horizontal surface in your house is cluttered to the point where you have to move things to set things down, well, you've got issues, my friend, and it is time to take action.

7.  Don't take crap!  My parents found a great way to get rid of junk, and that was to pawn it off on the kids.  "Gee, this broken table is still good, sort of.  Let's give it to the boys!"  Giving away crap is a good idea - for the giver.  They get to feel they are getting "value" for the item, without merely discarding it.  The receiver, on the other hand, ends up with a mound of garbage.  Just say "no" to free crap from your parent's attic!

8.  Annual Garage Sale:  Once a year, at least, have a garage sale.  Put out everything you want to get rid of, sell it for a few hours and then haul the remainder to the curb (people will take it, trust me).  DO NOT, UNDER ANY CIRCUMSTANCES, TAKE STUFF BACK INSIDE.  Having a garage sale, at least once a year, is essential to culling your load of crap.  But be sure to SELL things, not put obscene prices on them and then use that as an excuse to keep stuff.  (UPDATE:  Take a few things you might not want to sell, put a high price on them and see what happens.  Sometimes you realize that you'd rather have the cash than than the things).

9.  Throw away disposable stuff:  I have a friend who collects cardboard coasters from bars.  It is fun to see the names of different beers or different bars on them.   But, they wear out rather quickly, and should be thrown away, as they were intended to be.  I recently discovered, to my horror, that I had no fewer than eight (8) coasters on my desk.  Arrrrrgh!  I'm going hoarder!

10.  Throw away broken things:  That old cell phone is obsolete and the battery is flat - and the charger is broken.  Why are you saving it, again?  If you cannot repair something - and repair it right away - putting it in a drawer won't fix it.  And yet, it is human nature to try to keep broken crap on the premise that it might be fixable down the road.  Fight the urge to keep broken junk.  Just toss it!

11.  Toss away Scraps:  It is tempting to keep an old piece of 2 x 4 around, as you "might need it someday".  But burning it in the fireplace is a better idea.  Similarly, half-empty paint cans just end up drying out. Paint something or toss them.  And I never understood, for the life of me, old men who buy a bag of fertilizer, put half of it on their lawn, and then "save" half, until it turns into a solid rock and leaves a chemical stain on their garage floor.  No leftovers, no scraps, no "saving"!


We are in a situation where we have too much crap.  We sold the vacation home last year and now have two of everything. Plus, when I closed my office, I ended up with a collection of staplers, hole punches, printers, computers, photocopiers, reams of paper, note pads - you-name-it.  It is hard to "let go" and throw away things you no longer need.  The accumulated detritus of 50 years just piles up, over time.

And it takes time to get rid of things - and over time, you accumulate more.  There reaches a point - a critical mass if you will, where you have so many things that it is hard to get rid of junk faster than it accumulates.  Once you reach this critical mass it may in fact be too late - the rate of accumulation will continue to accelerate until you are buried in crapola.  It will literally be impossible, at that point, to discard things faster than they accumulate.

Our electronic age might help somewhat.  Although I have two trunks of photo albums, I haven't printed out a photo in years.  They are all on the Internet right now - or on multiple hard drives.  And let's face it - who wants to look at old photos?  The iPod and its ilk are replacing walls of records, stacks of CDs, and the like.  And more and more, we just download things, use them, and then let them evaporate into the electronic ether.  This can be a good thing.