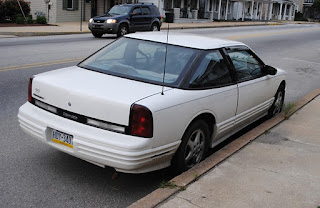 GM made a succession of bad design moves from the late 1960's until today.  It is surprising they didn't go bankrupt decades ago!


In the 1960's, American cars in general had a quality reputation problem.  Planned obsolescence was the word of the day.  Most cars never made it past 80,000 miles.  Exhaust systems lasted 2-3 years, tops.  And most cars rusted out in 5 years or less, in the Northeast.  GM was hobbled with all these problems, plus the embarrassment of its only entry in the subcompact field - the Corvair - being the notorious subject of Ralph Nader's book.  (never mind that he wrote one on Volkswagen as well - VW didn't hire private investigators to look into his life).

Entering the early 1970's, GM was crippled with a major strike, which took years to recover from. Cheaper metal was put in the 1973 models, which rusted notoriously.  And GM's next entry into the subcompact car market was the Vega - which rusted like mad as well.  The Vega suffered from a number of problems, the most obvious one being that its highly experimental engine would blow up after about 60,000 miles.  GM offered to repair rusty cars and put fender liners in later models.   They offered an unheard-of 5 year, 60,000 mile warranty on the engine.  Like with Corvair, they tried to it on the cheap and paid for it in the end.  They finally threw in the towel, renamed the car "Monza" and tossed in the Iron Duke four-cylinder from the '62 Nova.

Emissions controls on primitive carburetors choked off most engines in the late 1970s, and by 1979, even the mighty Corvette was struggling to make 178 HP.  GM offered a new sub-sub compact, the Chevette, based on a Brazilian design.  It actually not a bad car, but compared to Japanese imports, was slower, more cramped, and more expensive.  American car company's fortunes were waning.

And during this time, due to a number of gas shocks, GM decided to "downsize" its cars.  The mood was bleak in Detroit.  The glory days were over.  As one of my professors at GMI put it, "We're the first generation not to go faster than the previous one."

In the early 1980's, GM tried again with a small car - the ill-fated Citation X-body.  It sold well, but had a horrible reputation for reliability.  GM later took bits of this design and put them into a more successful A-Body car, but the Citation merely added to a string of failures that tarnished the image of the company.  You can only sell so many crappy cars before people catch on.  The fellow who trades his Corvair for a Vega, and then a Vega for a Chevette, and then that for a Citation - he drives a Toyota these days - and will do so for the rest of his life.

In the mid 1980's GM decided to start over with a new platform - the GM10 platform.  The terms "ill-fated" and "debacle" come to mind here.  In a show of hubris, GM spent $7 Billion to develop the platform, which was plagued by delays and cost overruns.  The reception of the cars was less than anticipated, and quality control problems abounded.  Worst of all, GM lost nearly $2000 on every car sold - in effect paying customers to take these cars off its hands.

The cars were ugly.  And while Ford had a hit with its four-door Taurus, GM decided to introduce coupe version first. One mistake compounded another.

What happened here?  Well, for starters, I think the bloated middle management of the company dragged it down.   Rather than tweak previous platforms, the bloated engineering staff had to show something to justify its existence, so they came up with the GM10 platform - and squandered over 7 Billion dollars in the process.  And at about the same time, they blew another 5 Billion on Saturn - an ill-fated venture if there ever was one.  It's been said that GM could have bought Toyota outright, for what it spend developing Saturn, and perhaps this is true.  And perhaps this is why GM today is relying on platform technology from its European divisions.

So how did GM stay in business so long?  Well, a lot of people are loyal to a make or marque.  Others are so clueless as to buy whatever has a cute advertising jingle - or whatever the salesman said they should buy.  And of course, still others will "Buy American!" feeling it is a patriotic duty.

And the cheap gas of the Clinton era delayed GM's death by a decade.  Despite its constant mis-steps in the small car arena for four decades, the sales of Tahoes and Suburbans took off in the 1990's and were cash cows for the company.  And the huge profits from those empty steel boxes offset the losses in the smaller cars - so GM stopped looking so hard as to what it was doing wrong with small cars.

The question remains, though, as to why GM - once known for engineering excellence - lost its way for 40 years.  Part of the answer lies in John DeLorean's book, On a Clear Day, You can See General Motors.  DeLorean describes, succinctly, what I have described in earlier postings - a corporate culture where people worried more about retiring with benefits that with the success of the company. As DeLorean put it, with the design of the Vega, each engineering team did its job and then "threw it over the fence" to the next guy, not caring whether their design choices in engine or drivetrain would make it difficult for the people in body or chassis.  There was no cooperation or overall plan.

And the demise of separate engineering departments for the divisions was part of the problem.  Since all car divisions sold the same cars - with the same engines - the motivation to create something unusual or different diminished.  It is hard to get someone excited about designing a different ashtray for the Ventura than the Nova, for example.

Today, GM has shed its myriad divisions.  And perhaps they can get the excitement back - without Pontiac - and have engineering teams interested in building truly great cars.  Perhaps.  But then again, corporate cultures have long, long memories.

We recently rented a Chevy Impala - built on an updated version of the GM10 platform, known as the GM W Platform.  It is slated to disappear next year, in favor of a new Impala based on an elongated Malibu chassis - an Epsilon platform designed in Germany.

Perhaps GM is learning from the past  - that you have to have a passion for cars to design them.  And you can't cheap the crap out of a car without it coming back to haunt you in two ways.  First, you end up paying more in warranty claims and back-door fixes.  Second, every person who buys a poorly made car is a future customer for your competition.

And this reputation will be hard to shake.  40 years of really crappy cars is not much of a track record.  And for the last 40 years, the only defenders of GM iron have been people who are really not all that bright, or who are just prejudiced or dumb enough to be "brand loyal".

Which leads to GM's other big problem.  Since most smart people stopped buying their cars years ago, the GM car has a reputation as being something sold to dolts and idiots - people who understand little about cars or how they are made.  They are cars for the unsophisticated great unwashed masses.

While GM de-contented and went down-market, Americans by the millions showed their market preferences by purchasing very expensive BMWs, Mercedes, Audis, Lexuses, Infinities, Acuras, and the like.  Such folks were not likely to set foot in a Pontiac showroom.  And it will be a tough sell to even get them into a Cadillac.

But alas, that is the reputation of the Big-3 automakers - they sell trailer park cars, that depreciate rapidly.  Turning around this psychological image will be a big part of their overall turnaround.
Newer Post Older Post Home