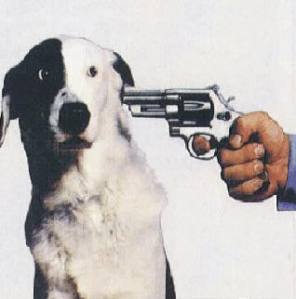 IT Professionals are Enemies of Productivity and Should be Taken out and Shot Like Dogs!
Today, the Internet goes down.  I call AT&T to find out why, and I am told that some idiot in the IT department decided to "upgrade" security by changing EVERYONE'S login password.

And of course, they notified everyone by sending an e-mail to their BellSouth address.  Smart move, considering that few of us actually use the assigned e-mail addresses.

So, the DSL helpline is swamped with callers - and each and every AT&T customer has to call in to reconfigure their modem.  The cost in terms of wasted man-hours, both for customers and AT&T is staggering.  This has to be in the millions of dollars - perhaps billions.

What was the point of this?  To increase security?  Who, in God's name is hacking DSL lines?  You'd have to be pretty ballsy to climb the pole and tap into the twisted pair.

On the other hand, it gives some IT dweeb at chance to make it appear he is doing something of value and create a chaotic situation where everyone has to rely upon them.  This is called passive-aggression.

So, the next time you are in the parking garage at work, and you see the IT dork waddling toward his Geo, do me a favor and hit the gas on your Lexus and run the asshole down.  Or, if you decide to participate in "bring your gun to work day," make sure to visit the IT department FIRST.  Slip anti-freeze into his big-gulp.  Do SOMETHING - before it is too late!

Over and over again, I've seen these dweebs wreck productivity, just out of sheer boredom, or because they start to think (correctly) that their job is increasinly unnecessary.  So the company website gets a re-design, making it nearly impossible to use - and obsoleting all your bookmarks and links.  Why?  Because some HTML programmer was bored and needed to puff up his "accomplishments" list for his yearly evaluation.  These are the same dorks who take workable websites and destroy them with slow-loading flash animation.  These folks are the enemy, plain and simple.