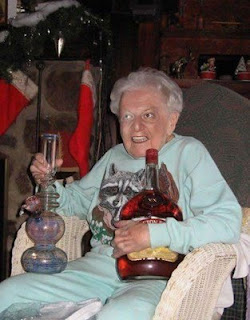 Free Pot for Seniors could solve a number of social problems - simultaneously!

Legalize Marijuana  - but only for those on Social Security!

The other day, I got to thinking that the problem with pot is that it puts people into a condition of stasis and also saps them of any ambition.  This is a fine thing, if you have no responsibilities or duties.  But for most of us, well, we have to eke out a living now and again.  Young pot-smokers thus tend to end up living in their parent's basement and end up as underachievers.

Then it hit me.  Why not legalize pot, but just for people 65 and over - who have no real responsibilities anymore and can afford to kick back and get high?  Old people have nothing but time on their hands, and stasis is their way of life already.

The sheer genius of the plan immediately struck me.  Impoverished and lonely Seniors will suddenly find themselves very popular - particularly with their Grandchildren - "Gee, you kids were never so keen about visiting Grandma before!"

And since most Seniors will be zonked out most of the time, the cost of medicines will drop off, as they complain less and less about their ailments.  Granted, the cost of delivery pizza would rise, but that is a small price to pay.

Crime in the inner city would also drop off, as drug dealing moves from the ghetto to the retirement home.  Impoverished Seniors can augment their income by selling off some of their "stash" now and again.  Oldsters will "hang out" on the street corners in The Villages, leaning into the windows of passing cars and muttering, "You looking?  Got some fine weed here!"

The best part of all, is that it solves the Social Security crises.  Government-grown pot would cost only a few dollars a pound to produce (it is, after all, a weed).  Instead of a cash payment for Social Security, Seniors could be paid in pot, which they could then re-sell on the open market (which would make free-market Capitalist Republicans happy).  It would cut the cost of Social Security by about 90%.

Everyone wins.  A think a pound a month for Grandma should be about right.