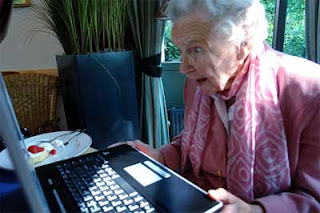 A lot of people spend a lot of time on the Internet and claim to be addicted to it.  But unlike cigarettes and drugs, it tends to be an addiction that wears off over time.
I spend a lot of time on the Internet, but probably not on the sites you visit.  You probably would find www.uspto.gov and www.wipo.org and www.freepatentsonline.com kind of boring.  For the most part, other than this blog, I spend most of my online time on my work sites, or checking and balancing my bank accounts and investments.  About once a day, I check www.snopes.com - because it gives you a "heads up" to the next scam about to hit your inbox.  And I check a news site such as CNN.com (although less and less lately, as I don't consider celebrity news to be news) just to see if a hurricane is bearing down on me or not.

I used to visit a lot of other sites, and get involved in discussion groups.  But I found them to be less and less satisfying over time and left them.  Why?  Well, discussion groups, sort of an early form of social networking, ended up being SPAMed early on.  And even when not SPAMed, they tended to fall into a very typical pattern, where hard-core Internet addicts would dominate the discussions and shout down anyone who tried to enter.  Trolls abounded, trying to bait people and start fights.  It was all heat and little illumination.  And most discussion groups quickly got "off topic" and stayed there.

Other sites, such as YouTube, can be entertaining, although once you've seen one funny cat video, or a horrific motorcycle accident video, you've seen them all.  And watching a 30-second commercial so you can see a 1-minute video is not really an effective use of your time.  Now that it is monetized, it is less attractive.

MySpace was interesting for about 10 minutes, until they started SPAMming it with ads for garage bands.  Linked-In is OK, I guess, but has that desperate aura of people who are underemployed, unemployed, or don't have any sort of client base.  And I am not sure there are clients to be had there, anyway - just more people like yourself, looking.  Busy folks don't spend all day on Social Networking sites.

Facebook, of course, was fun, until it became an endless stream of Farmville updates, and until they kept changing the format over and over again (with a new one scheduled to come out this month, apparently).  Once you saw what all your high school buds were doing, you kind of lose interest.  And no offense, but I don't need to know about everything in your daily life any more than you need to know about mine.

eBay was a lot of fun, just to troll and look at stuff.  Hey look!  A '67 Chevy for sale, just like the one I had in High School!  And it was a fun place to buy and sell things.  But increasingly, I am finding it more of a hassle, than anything, just to list an item (and answer all the inane questions from non-bidders) and the fee structure is such that you can spend hours on an auction, and walk away with 50 cents for your efforts.  And as a place for buying things, it is less and less attractive as well - oftentimes a retailer's website has better pricing.  I still use eBay on occasion, but I no longer "surf" there looking at stuff.

While it seems like an endless potpourri of fascinating stuff, the Internet really is very shallow, in terms of content.  As a result, the Internet ends up curing you of its addiction rather quickly.  It would be like booze that suddenly tasted like sour milk, or cigarettes that smoked like cow dung (well, they already do, I guess).  The amount of pleasure received diminishes rather quickly over time, to the point where you think, "why am I on here?".

Even sharing photos online gets boring - and a chore.  You have to upload them (using programs that are a kludge, to say the least) and then caption them and edit them and put them into albums.  Let's see, which photo did I want, the DGRYS667726 or DGRY66727?  And should it be in portrait mode?  And who really gives a crap or wants to look at my photo albums, anyway?

And on top of all of that, increasingly, the Internet is becoming something that wants your money, as well as your time - or wants to pummel you with bad normative cues, in the form of saturation advertising.

So increasingly, when I find my work done at the end of the day, I turn the computer OFF.  Why?  Because, like with television, there is "nothing on" the Internet worth watching.  Not, at least, in terms of website content.  Rather, I retire to the living room and watch a movie on Netflix.  But of course, that's not the Internet, right?
Newer Post Older Post Home