I Paid Back My Student Loans 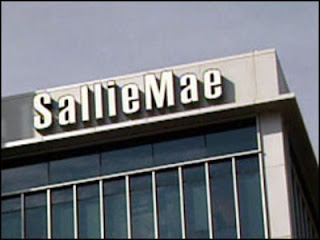 Some folks argue that having student loan debt is unfair, and that they should be relieved of some or all of this debt.  How fair is that to those of us who paid back their student loans?

I received an idiotic comment from one of the pot-smoking Wall-Street Occupy protesters (being redundant here) the other day.  Marijuana really should be reserved only for people 65 and over - who don't have to work.  The rest of you - get a haircut and a job, OK?

One problem with these stupid "Occupy" protesters is that they have no clue what they are protesting.  Their message is vague and incoherent and also is all over the board.  Pot, again.  One message that emerges is that some recent graduates from Party University are shocked - shocked, I say - to discover that no one wants to hire them, and oh by-the-way, Sallie Mae wants her fifty grand back.

So they argue that it was unfair they are being forced to pay back student loans that paid for pizza they pooped out years ago and THC that is mostly out of their bloodstream.  And they argue that the entire student loan system is rife with corruption and is designed to induce young kids to sign their life away.

And you have no argument with me - read my previous posts on the subject.  Student loans are very dangerous, and parents should counsel their kids to think twice, even three times, before signing up for tens or hundreds of thousands of dollars of debt, to get a degree in philosophy or something that doesn't pay back.

But granting bankruptcy relief for student loans is tricky.  As I reported before, one reason student loans survive bankruptcy is that wily law students would rack up massive student loan debts in undergraduate and then graduate school, then rack up credit card debt and maybe a new car loan, and then declare bankruptcy upon graduation - having all debt and no income.  And then the next year, they'd start a $100,000 a year job at a law firm.

Nice trick - ruined the whole thing for the rest of us, though.

I accumulated about $40,000 in student loan debt, and it took a decade to pay off (I declined Sallie Mae's kind offers of refinancing this over 30 years).  I kept my debt low - over 14 years of college - by working my way though college.  I delivered those pizzas that those rich kids (or kids who thought they were rich) ordered.  They paid, I made.

And I majored in fields where there is a demand for work - Electrical Engineering and Law.  I realized, after seeing how things played out for the previous generation, that majoring in stupid things, like "communications"or "anthropology" was just an excuse to get as shitfaced and stoned as possible, while avoiding work for four years.

Yea, Calculus was hard.  So was Thermodynamics and Electromagnetics.  But I worked hard and got by - and got a job.  And I did without fancy cars and other junk (and Cable TV) and paid off my Student Loans.

I wonder - just for shits and giggles - how many of these "Occupy" protesters complain they can't pay off their student loans - and text each other and twitter from their $500 smart phones, which cost $99 a month in cell service costs (about what I pay for a YEAR of pay-as-you-go cellular).

Spoiled rich kids.  The revolution will NOT be televised.  And it won't be on Twitter or Facebook, either.

Despite what the media conglomerates say.

Granting "relief" to people who bought more than they could afford is blatantly unfair to the rest of us.  People bought fancy houses and then say "Gee, I can't pay - adjust my mortgage so it is less than the guy who bought the responsible house!"

How does that make me feel, being the one to buy a smaller house and (gasp!) pay off the mortgage.  It makes me feel like a chump, that's what.

And the same is true with student loans.  If I had known I could duck out on ALL my credit obligations, I would have bought more houses, cars, boats, and taken out $200,000 in student loans, and then said "See Ya Later - SUCKERS!"

And that is what the "Occupy" Protesters want us to do.  And it isn't right, and it isn't the answer.

The problem is at the Dean's Office - where bloated costs and bureaucracy are making a college education less and less of a worthwhile proposition.  In fact, College started to be less worthwhile many years ago - particularly for bogus majors that never lead to anything - other than minimum-wage service jobs.

Education for education's sake is a fine thing - but do it on a budget.  There is no rational reason why the cost of college should have risen 2-3 times the rate of inflation over the last two decades.

Move the protest from Wall Street to the Bursar's Office.  Tell the Dean that you want a good education - at a reasonable price.  Because you have no one but yourself to blame for going into debt.