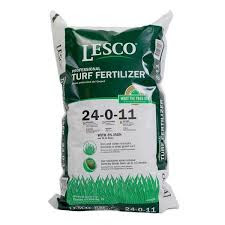 If you buy a bag of fertilizer, use it all.
There is nothing to be gained by saving a quarter of a bag of it.


When my Mother died, my Dad sold their home and moved. I helped him clean things out and he loaded up my truck with a lot of junk from the garage.  There were many small bags of fertilizer, lawn food, pesticides, and the like, that my Mother bought for yard work. For some reason, she would always use about 3/4 of the bag or more, and then "save the rest" for some unknown future need.

Needless to say, most of it was going in the garbage.  The fertilizer was now in a solid brick and not usable.  And of course, throwing such things away is problematic - you basically have a Hazmat cleanup problem on your hands.

The same is true for paint.   Many homeowners do a small painting project and buy a pot of paint.  They use most of it, and then try to "save" the remainder by re-attaching the lid.   What ends up happening, of course, is that the paint hardens like epoxy in the rusty can of paint.   Pretty soon you have a garage full of such crap, and then get depressed trying to clean it all out.

[as the Simpson family, who are finally together again, are about to leave the Springfield river]

Marge Simpson: So what was it like at the Flanders' house?
Homer: Yeah, gimme all the dirt.
Lisa Simpson: Let's see. Dirt... dirt... well, there wasn't really much dirt.
Bart: There was a bunch of old paint cans in the garage, though.
Homer: [laughs scoffingly] Old painty-can Ned.
[the family also laugh]
Homer: I always knew he'd keep his old cans of paint!
Marge Simpson: How do you like that!

Food is also problematic.  Some folks save the smallest scraps of food - in bits of tin foil, or zip-lock bags, or those foam clamshells from the restaurant.   When you are saving three olives, ask yourself what for.   And why would you want your refrigerator to be clogged with such bits of bad food that could make you sick?

Fiddly Bits.   That is what a Bri'ish friend of mine calls them.   Little containers of tiny amounts of food in the refrigerator.  Or 1/8 of a can of paint, saved for some contingency or "touch up" down the road.   They are wasteful and useless and clutter up your life.

Why do people do this sort of thing?   I think in part it is because people don't like to throw things out.   It is a mild form of hoarding disorder.   Also, too, people tend to view "wealth" in terms of things they own.   So a garage full of paint cans seems like a garage full of valuable stuff.  A refrigerator full of "fiddly bits" of food seems like a cornucopia of delicious treats.   We have an urge to acquire "stuff" and it pains us to part with a 1/4 can of paint or three sticks of celery.

How do you avoid this problem?   Use it up, or throw it out.   If you buy a bag of fertilizer for your plants or lawn, then go ahead and fertilize.   There is nothing to be gained by saving a tiny portion of the bag, as my Mother did (she had five acres of lawn to fertilize - it could take that 1/4 bag, no problem).   If you have a tiny bit of paint left, apply a second coat and then throw away the empty can.   If you have three olives left, make a Martini.

Or throw it out.   You will never find the perfect occasion to use 1/4 bag of fertilizer, or 1/8 of a quart of paint, or three olives.   The fantasy of the bare patch of lawn or the tiny spot that needs touching up, or that perfect topping for the dinner salad is never going to happen, for the simple reason that these "fiddly bits" end up getting lost in your garage, basement, or refrigerator, and you will never use them.   They will just age - but not like fine wine - and then months or years later, you end up throwing them out.

What is the harm in "fiddly bits"?   It drags you down, psychologically.   Keeping things you no longer use or need is just hoarding - not "saving".   And eventually your life gets cluttered and complicated by such nonsense.

And we all do it.   My Dad saved rusty screws and nails in old jars in his "shop" on the premise that "you never know, you might need a nail or a screw for something!".    And sadly, I tend to end up doing the same thing - only using an organizer for such screws and nails.   Yet, whenever I need screws or nails for a project, I end up buying new ones, as I want the correct size fasteners - and all matching, thank you.

A friend of ours had a house fire.  Some kids broke into their home and set it on fire.   It was devastating, of course.   But they admitted it was also liberating.    "We had boxes and boxes of junk in our attic and garage and basement, and half of it we didn't even know what it was.   The other half was just garbage.   But we didn't have time to sort through it all, so it never went away.   The fire made a lot of hard decisions for us!"

They started out new and fresh, with nothing lurking in the back of their closets.  No half-full bottle of motor oil lingering on the tool bench.    No junk that was broken but "too good to throw out".   A simplified and clean life, with less emotional and physical baggage.

We had a similar epiphany when cleaning out a dead relative's house.   All those precious collectibles and possessions were sold at an Estate sale for about $3500.   Not a lot of money in the greater scheme of things.   We think our stuff is priceless, when most of it is junk.   And when you go through someone else's cupboards, you think to yourself, "Why were they saving this 1/4 bottle of wine that is clearly several years old?   It is vinegar at this point!"

But then you realize that if someone went through your house, they'd find similar embarrassments.

And this is part and parcel of how your brain is programmed.  Psychologists have noted before that people tend to value their own possessions more than they value others.   Folks think their used car is worth well over book value, but that the new car at the dealer is overpriced.   This even holds true with regard to health insurance.   Folks value their existing plans and were wary of Obamacare.   They value what they already have more than some new product.   And sadly, when this tendency goes to extremes, this is what leads to hoarding disorder - people think their garbage is priceless and can never be thrown away.

It is hard to toss things away.   Once you "clean out" a closet, the very next day you will say, "Gee, I wish I had kept that left-handed metric monkey wrench, I could use that right about now!"

Periodic garage sales are helpful in eliminating clutter.   Just cleaning out and tossing out is also helpful.   It is not easy to do and it takes up an awful lot of time.   Because once you start digging into that closet, attic, or basement, you find stuff you didn't know you had, and then you start making a "this needs to be saved" pile and pretty soon, you haven't accomplished anything.

Worse yet, you end up going to the big-box store and buying some sort of organizer so you can store these precious pieces of shit in an organized fashion -  convincing yourself that you have "cleaned up" by organizing your half-used bottles of organic herbal shampoo (which  you don't like to use, but hey, it was expensive, and maybe someday you will use it, or a guest would like to, right?).

One reason I like our small camper is that there is so little in it.   It is very simple, clean and straightforward.   Not a lot of stuff to carry - not a lot of emotional baggage.   But after living in it for a month or so, you find that it, too, gets jammed with stuff and things and bits and bobs.   Pretty soon, you can't open a cabinet without things falling out!

Fiddly Bits.   They drive me nuts.   I want to simplify and unclutter my life.   But it is damn hard to do!