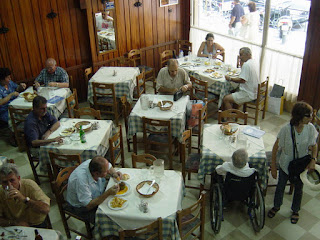 Restaurants have started a lot of annoying trends in the last 50 years.


I was dining out with friends the other day, and I was thinking about how annoying eating at Restaurants has become.   It was not always thus!   When my parents ate out, they usually took the kids.  We had to behave, of course (and for the most part, did).   So I have been eating in restaurants for half a century now.  And a lot has changed - not for the better.

Here are ten annoying things that restaurants have decided to do in the last 50 years:

1.  The waiter giving you his name.  "Hello, my name is Steven, and I'll be your server tonight!" they chirp, as they come to the table.  This never happened back in 1969, at high-end or low-end restaurants.  You see, the meal wasn't all about Steven back then, and waiters were discrete and efficient, not chatty.   I chalk this one up to Corporate Restaurant Chains, who instruct their minions to do this, thinking that it equates to better service.   If you talk about service enough, maybe people will believe they are actually getting it.  Paul Zaloom, in one of his shows in the 1980's, parodied this trend with the line, "Hello, my name is Pat, and I'll be your butter...."

2. Leaving silverware on the table.  Many people remember the exact moment and where they were when 9/11 occurred.   Similarly, I remember the exact moment, the first time I went to a restaurant, and the server took silverware off my plate and put it back on the table.   Whoa.  Did she just do that?  The world just changed.   It was in the early 1980's, as I recall, and within a few years, almost every restaurant started doing it.   Again, I think the Corporate Chains started this, as it cut down on dishwashing expenses and labor.   But it just smacks of cheapness and it is also gross - utensils sitting on the table, with food crusted on them, leaving stains on the tablecloth, while you wait for the next course.   The best restaurants never did this, of course.   And today, I think the tide is turning back.   Let's hope, anyway.

3.  Servers who say, "How is everyone doing here?  Does everything taste good?"   You know the drill.  You and your friends are having a good time, talking, eating and then the server pops in with these idiot questions.  It started in the late 1980's with the "how is everyone doing here?" bit, which was annoying as you could not answer with a mouth full of food.  Again, it was Corporate Restaurant Chains that did this - trying to get you to think the server really cared, by showing up when they were not needed.   This morphed in the last decade to this "Does everything taste good?" line, which for some reason literally makes me want to gag.  "Garcon, bring me a bucket, I wish to vomit!"

4.  Servers who say, "Are you still working on that?"  Again, you know the drill on this.   You are sitting at the table and not done eating and they say, "Are you still working on that?" as if you were plastering a wall or something.   Again, this is Corporate Chain Restaurant Edicts (like the Flair required at T.G.L. McTchotchkis) and I think is designed to make you feel slightly ill - so you finish your meal and they can flip the table.  Again, bring me a bucket, I wish to vomit.

5.  Take home Styrofoam clamshells.  Back in the 1960's once in a great while, my parents would bring home a "doggie bag" with a steak bone or a small piece of steak as a treat for our dog.   That was then.  Today, it is almost standard procedure for most folks to take half their meal back home in a Styrofoam clamshell, to be eaten later on - by themselves, not their dog.   This is gross and disgusting and our European friends think we are insane for doing this (they are right).  It is unsanitary and unsafe - lukewarm meals in the trunk of your car are sure-fire recipe for food poisoning.   Today, the waiters no longer handle the food, but bring you bags and clamshells (no doubt due to a memo from the risk-management attorneys at the corporate chain) and you can scoop your food at the table, into boxes and bags.  Disgusting!

6.  Portion sizes.  Closely related to #5 above is the portion problem.  Rather than provide properly-sized portions of good quality food, Americans seem to prefer huge portions of really, really bad food.   A mountain of soggy french fries is apparently a good thing because you get more of it.   People look at restaurants like gas stations - how many calories are they getting per dollar.   And America's restaurants are up to the task, loading up meals with lots of cheap starches so you get "value" for your dollar, instead of quality.

7.  Restaurants as Kitchens.   And #5 and #6 morph into #7.  For many folks, the restaurant has replaced the kitchen as the place where most of their meals are prepared and consumed.   A lot of folks - even in the lower classes, eat out five nights a week.   They "fuel up" at a restaurant on high-sodium, high-calorie, and high-starch foods, and then justify the expense by bringing the leftovers to work as "lunch" the next day.   A restaurant is not a substitute for a kitchen, and eating out all the time is not cost-effective.  For the cost of one restaurant meal, you can make 5-10 meals at home (the subject of my next posting).

8.  Lines out the door and Pagers.   For some reason, Americans love their impersonal Corporate Restaurant Chains, and will line up out the door to eat there.   Most of these chains have bench seats near the door just so people can wait - and pagers that flash and buzz when they've flipped a table for you.  When we lived in Ithaca, New York, there was a great locally-run Tex-Mex place downtown.  It was busy, to be sure.   But most of the Cornell students would drive out to the strip malls to wait in line at Chili's - and pay more for a meal of lesser quality.   Americans, despite their pretensions at being "foodies" tend to be very conservative and frightened about food.   Having a bad meal is something they fear more than anything.   Suppose there are items on the menu they've never heard of?   How will they know what to order?   More than one American has told me that they "always" go to a chain restaurant, because "It is always the same and you know what to expect".    Hard to believe this is the same country that put a man on the moon (what with there being no Bennigans there and all).

9.  Chain Restaurants.   Which brings us to #9.   When I was a kid, there were few chain restaurants.   There was Howard Johnson's, which was usually located next to the Motel of the same name.   People ate at such places when traveling as it was easy to find (next to the Motel) and as noted above, "they knew what to expect".   And what they expected was pretty good, actually.  Jacques Pepin was actually their corporate chef, and he created a line of frozen entrees that were so good, they started selling them in stores.   Sadly, when the founder died, the next generation of owners let Pepin go, and the chain went downhill.   And new chains sprung up - not catering to travelers looking for a quick meal, but to the locals instead.   Fast-food chains put the Mom & Pop burger and breakfast joints out of business.   Denny's killed off the Diners (and replaced them with faked-up Diners, years later).   Upscale chain restaurants killed off local efforts, as they could charge less and market far more effectively.   Saturation advertisements on television just are not in the cards for the owners of the local Olde Tyme Gaslight Restaurant.

10. Table Clutter and Menu Clutter.   Back in the day, if you wanted ketchup on your french fries, they brought it to the table.  Today, there are napkin dispensers, salt and pepper shakers, ketchup, mustard, hot sauce, and a number of other condiments - left out on the table at room temperature.   Then there are table decorations, and at the chain restaurants, little (or large) tri-fold deals telling you about blender drinks or desserts.  Some chains even use "flip over" dealies like the scorecard from What's My Line?.  Menus are worse - often with inserts and specials (laminated, in Corporate restaurants) and so many choices that you can never really be sure what you want to order.  A good restaurant has a few basic things and does them all very well.  Today's restaurants try to do everything (Tex-Mex, Thai and Sushi!) and does none of them well.
* * *

Eating in a restaurant should be a real treat and a special occasion, not a chance to refuel your body by stuffing 1500 calories of bad food down your gullet.   Sadly, the trend in the last 50 years has been toward the latter.   Restaurants today are far more plentiful (in terms of per capita) than when I was a youth.   And today, they tend to be boring, mindless, faceless chain creations, complete with faux patinas and themes.

Why people eat at these places is beyond me.  They are bad for your body, and bad for your pocketbook.
Newer Post Older Post Home