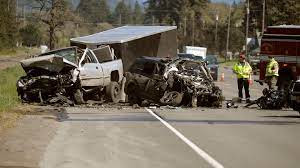 Most of us bitch and moan about how hard we have it in life.   Most of us are clueless.


You've heard it before, at a party or just while shooting the shit with people.  Some idiot tells you how hard is life is, because he is living "paycheck to paycheck" and if it weren't for Obama/Republicans/Wall Street Fat Cats/ Liberals/Whatever, he'd be living on Easy Street instead of "suffering".

Or you hear some yahoo moaning about how the "American Dream" is shattered or some news reporter blathering on about how some "victim" is losing their overpriced and under-financed home and how awful that is to lose a THING that you never could have afforded anyway.

I met a man last night who was injured in a car wreck.  He is OK, but his wife died in the wreck and his two children face months of surgery and rehabilitation, if they are ever to walk again.   One moment, he is worrying about credit card bills and asking the kids to pipe down back there and worrying about traffic.  The next moment his life is torn apart.

I mentioned before a friend from college who was in a major wreck like that and faced years of back surgery and rehabilitation.  She said that the experience really put life in perspective - and insinuated that I was pretty superficial and lazy.  She was right.

Sadly, most of us never figure these things out.   For some, it takes a life-changing event to finally put things in perspective.  For others, the fragility of life becomes apparent over time, as one realizes how quickly things can change in an instant.

Now, some folks might take what I am saying the wrong way.  "Well, it could all end tomorrow, so you might as well enjoy today!  Get a new smart phone! Watch Cable TV!  Spend it all!"

But that is just the opposite of what I mean - and the thinking I had when my back-injured friend told me I was superficial and lazy.   Life is precious, short, and fragile.  And that is all the more reason to get your shit together and stop spending money like a drunken sailor.  It is all the more reason to save for a "rainy day" as it can rain buckets at any minute.

Life is too short to go through it being unhappy because of bills, material things, or "living paycheck to paycheck".   It can all end in an instant, and if you've wasted it all by running a treadmill so you can have "things" - whose fault is that?

The fellow I met last night was in remarkably good spirits considering all he had been through.  I suspect that the experience put his life in perspective.  He realizes now what is important in life and what really isn't.   And he realizes how little control we have over fate and destiny.

No, we can't control the fates.   But we can balance our checkbooks.   Bouncing a check is not destiny, but a choice.

Speaking of which, a story on Evening Liberal Claptrap is a case in point. They are talking about bank service charges and how ATM fees are a way for banks to make money off of other banks' customers.   "Unlike a bounce check fee," they drone, "with an ATM fee, at least you have a choice!"

Really, bouncing checks is inevitable?    No, it is not.  Not if you balance your account every day - which is so easy to do in this day of smart phones and Internet.   Yet the people with the smart phones are least likely to do this.  One fellow admitted to me that he checks his credit card account once a month.   Once a month?  And in his hand is a device that allows him to check it hourly.  But that would interfere with his texting, I guess.
Newer Post Older Post Home