What is it with Men and their Dicks? 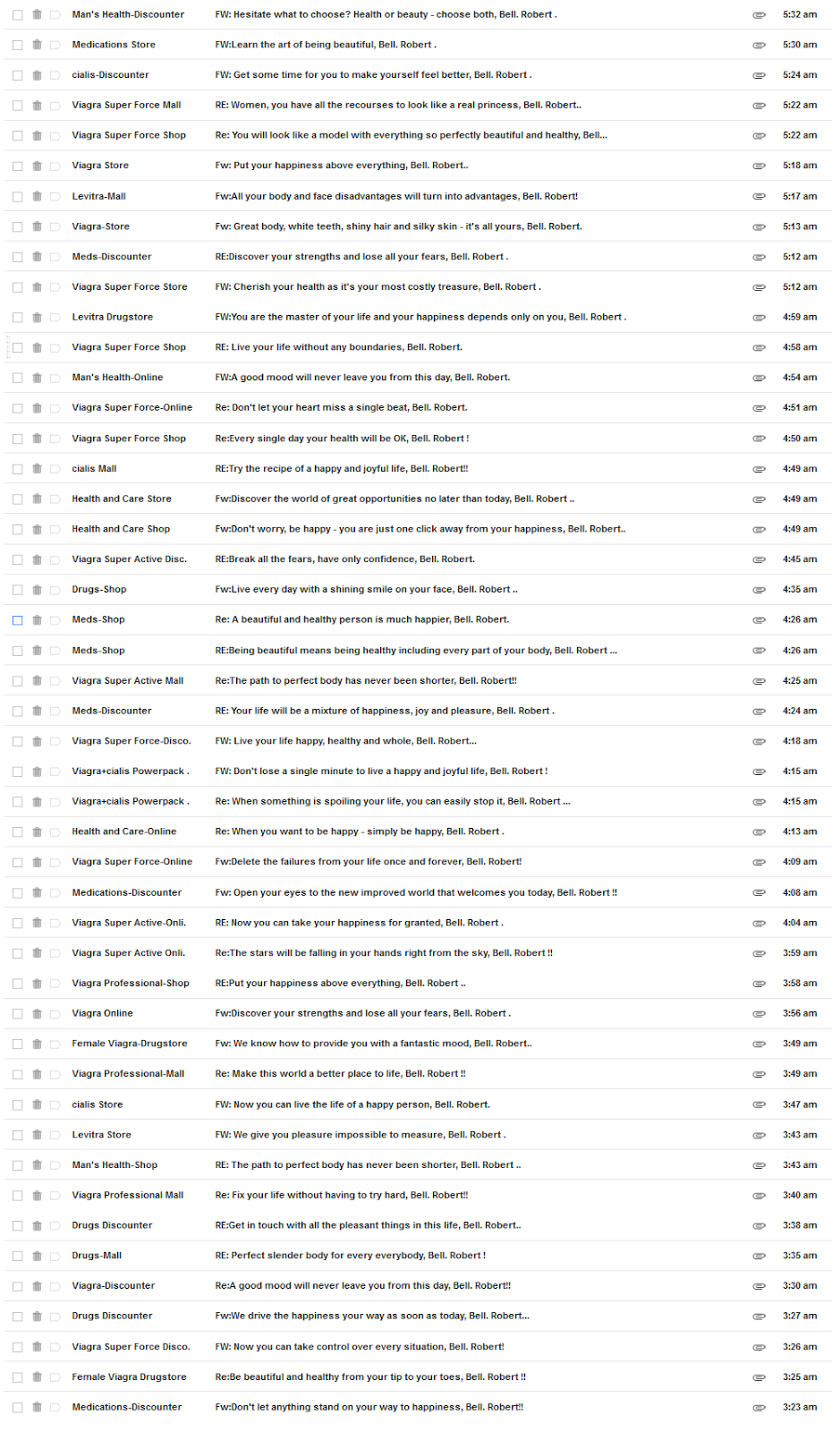 This morning, someone sent 56 messages to my inbox, only minutes apart, advertising Viagra and Cialis.  Of course, I long ago created an e-mail filter that sends any e-mail with the words "Viagra" or "Cialis" to my TRASH box.   What is it about men and their dicks that gets them so worked up?  Click to enlarge (pardon the pun).

Viagra is one of the most popular prescription drugs on the market.  It has made its makers millions, if not billions of dollars.   And for some reason, it is the number one drug advertised on the Internet, even though it is a prescription drug and you can't buy it without a prescription.  I suspect that they are not actually selling Viagra, but are instead trolling for data - hoping some chump clicks on the e-mail and then forks over his credit card information on the hope he can get a boner pill.

Why do internet con-artists use "Viagra" as a come-on?   Probably because a lot of men are too embarrassed to go see a doctor and get a prescription for the drug.  Probably also that a lot of people use the drug recreationally - that is, without a prescription.  Viagra pills are handed about or sold with impunity - the Police have better things to do with their time than go after illegal Viagra sellers.

And of course, pharmaceutical companies like this just fine.   The big pharmaceutical companies know that they sell more Viagra (and its equivalents) than there is a legitimate market for - just as they know they sell an awful lot of Oxycontin and other opiates and derivatives than there are legitimate patients for.  The illegal drug market in the United States is more and more marked by the illegal sale of legal drugs.   The companies know this - and turn a blind eye.

But it beggars the question - who buys this stuff and why?   I know some folks who passed around "the little blue pill" which they "got from a friend" and decided to try.   Did they have erectile dysfunction?   Of course not.   But they felt that somehow this pill would enhance their sexual experience or make them more virile.

And that is men in a nutshell (pardon the pun).   They are obsessed with their penis.  From the time a prepubescent boy discovers that it "feels good if I touch it there" (and his horrified Mother tells him to stop!) they cannot leave it alone.   They worry that it is too small, too big (not very often), curves to the left, or right, or that one testicle is larger or hangs lower than the other (all are very normal, relax).   And then they worry about their performance in bed (or don't worry, much to the chagrin of women everywhere).  They are obsessed with their dick.   And as many women note, they seem to think with it.

Marketers know this.   And that is why you can sell monster trucks (what we call "penis enlargers" - they don't work, though) to idiots who feel the need to bolster their manhood.   We saw one the other day - a crew-cab Ford dually with a lift kit that was easily a foot.   It looked ridiculous.   He clearly wasn't towing anything with it (now with the lame "adjustable hitch" he had on it) and the back of it was full of trash.   He was commuting to work in it.   This is a truck whose only real use is in towing a 10,000 lb. trailer, and even then, a 12" lift kit kind of defeats that purpose.  It was a clown truck, really.

Men's anxiety about their dicks sells a lot of products.  So-called "Penis boats" are a case in point.  Without this anxiety, the motorcycle industry would disappear entirely (while many women enjoy motorcycling, it is predominately a male sport - and a rather misogynist one at that.  Women are viewed as mere passengers only, by most men).  Penis anxiety is what gets men to buy the biggest and baddest motorhome on the lot.  And it sells a lot of muscle cars, as well - and let's not forget off-road buggies!

Note that all of these are "big ticket" items than can bankrupt a middle-class person - or at the very least put a huge dent in their net worth (and retirement plan).  That is how powerful the pull is (again, sorry for the pun).   Men just can't help themselves, it seems.   Even for the younger crowd - who might not have as much money to spend, penis anxiety sells a lot of bolt-on automotive accessories, which are usually designed to make a pedestrian car louder and more ugly (but rarely faster).

But on a daily basis, men are marketed to on the basis of their penis anxiety.   Things like beer, liquor, aftershave, and the like, are sold on the basis of how manly they will make you feel or how sexually attractive.   Old Spice is running a spot now where a very poorly designed robot is fawned over by women, after he applies Old Spice.   The message is clear:  Even the most unattractive man with the tiniest penis, will be sexually attractive if he applies this aftershave.   The folks at Axe Body Spray have been playing on this post-adolescent fear for a long time.

The marketing business knows it can sell just about anything to Men, if you approach them the right way.  The old saw that "the way to a man's heart is through his stomach" may be true.   But the direct line to his cerebral cortex is through his penis.   Once you yank his wanker, you have him hooked on whatever product you want to sell him.

And that is why marketers love young men, age 16-35, as you can sell them just about anything - even the idea of charging a machine-gun nest.  Men are brave.  Men are strong.  Men are idiots.   Nothing works better - for other people - than a strong back and a weak mind.

So, what is the point of all this?   Well, as a man, you can save yourself an awful amount of grief in life by simply owning up to this fact - that you are caught up in your genitalia, and that it dominates your life.  Be aware of this and be aware when the marketing types play to your weakness.   They will try to sell you things (boy howdy will they try to sell you things!) based on your need to assert your masculinity.

Once you are safely past the age of 35, or even 40, the siren song of marketing starts to fade.   Perhaps because you have family responsibilities now, or perhaps you are thinking more and more of retirement.  Whatever the reason, it is a lot harder (but not impossible) to sell monster trucks and other "penis enlargers" to older men.   Thus, if you can resist the temptation to be wanked by the marketing department during those vulnerable years, it will pay off for you in the end.   And trust me, you are missing nothing by not buying a penis boat or a monster truck.

But what about women?   Well, if you marry a man (or even date one) keep this in mind.   Men have this need to be validated for what is between their legs.   While they appear to be brave and strong and stoic (or so goes the mythology) in reality they are incredibly vulnerable beings.   They usually express their fears and frustrations in violence, not tears, however.   If you decide to take up with a man, expect him to come home at least once with some bonehead idea like buying a Jeep or a motorcycle.  While these may be fun toys, the cost of them probably directly conflicts with your plans of having a family, buying a home, and saving money for retirement.

And handling this is tricky.   You don't want to be seen as the harridan who spoils all the fun - the Marge Simpson to his Homer.   But there are other options, besides signing loan papers on a rapidly depreciating powered toy.   Get him to buy an older bike, for example, and he can spend the winter months restoring it in the basement.  Far cheaper and safer than him actually riding it.   You can be creative and have hobbies and toys at a much reduced expense.  Be supportive without being a doormat.   Set a budget for such things and stick to it.

And when he turns 35 and loses interest in the "must have" toy of a 28-year-old, well, for God's sake, sell it.
Newer Post Older Post Home