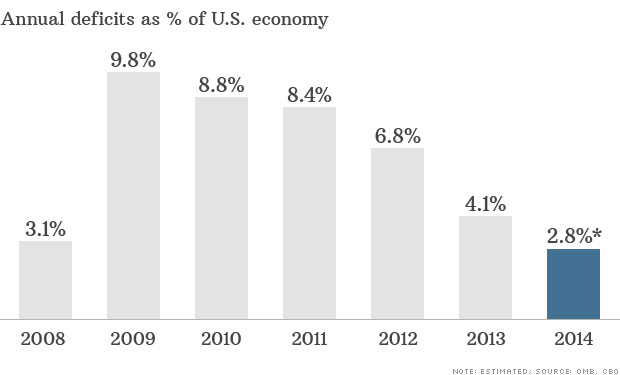 An Improving Economy and Decreasing Deficits.  Brought to you by, the President with the lowest approval ratings since George Bush!


People like to bash Presidents like Pinatas.  Why not?  They are easy targets.  Blame them for everything that goes wrong in your life!   But give all those S.O.B.'s in Congress who actually make the laws a free pass, OK?  Particularly the odious bastard from your district that you voted for.

The untold story of the last five years is that since the market crash of 2009, things have been getting better and better.   If we had a Republican in the White House over the last eight years, we would really be in the shitter.   See, e.g., Herbert Hoover.   You see, when the economy tanks, it is no time to cut back on spending and lower taxes.  But that is what Republicans have been clamoring for since Obama took office.

Good thing they didn't get their way.

Because in the last five years, the stock market has been on a tear - a bull market, as they say.  Not spectacular rates of return, but more than adequate.

And unemployment has dropped considerably, to the point where it is at levels that are considered "normal" in most economies.   But no one seems to notice this.

And government spending?  Well, our deficit, in terms of percentage of GDP, has dropped every year for the last five years.

Funny thing, the news channels never talk about that.   All they talk about is the three people with Ebola or some idiot with a gun who shot somebody in the name of Islam.   Yea, that's a real threat to our society - issues that affect less than a dozen people in our country.

We fail to see the larger picture.   We like to think of ourselves as "put upon" and under stress.   After all, we are just living "paycheck to paycheck" - hardly able to pay the credit card bills for our take-out meals and cruise-ship vacations, right?

The reality is, the vast majority of Americans have it pretty swell, but they don't want to admit to it.   Because admitting that things are good is somehow bad.   Everything has to be rotten, all the time.

Maybe America is smoking pot?   I dunno.  I just don't get it.   If current economic conditions are not to your satisfaction, I submit that absolutely nothing in this world will ever, ever make you happy.

You have the highest standard of living on the planet and are still unhappy.

Maybe the problem isn't Obama or the Republicans or the government or Islamo-fascists or Ebola.

Maybe the problem is YOU.