The Free Speech Movement - Are We Being Ratfucked? 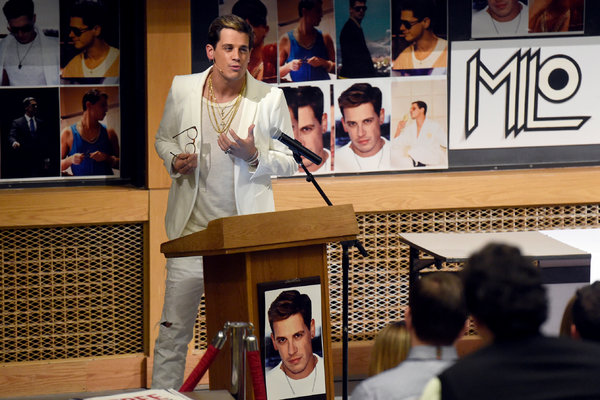 Political commentator or head of a boy-band?

I am not sure what to make of all-American Patriot Milos Yanniyapalapalous.  He is a hero of the All-White Alt-Right, an American through and through, who can trace his ancestry from the sands of Iwo Jima to Gettysburg to Valley Forge to the Mayflower.  America needs more white men like him, to be sure, to stand up for our race!

Oh, wrong Yanni.   He's an immigrant.  You know, one of those icky people that the far-right hates these days.   From some Mediterranean country, too.  Near Turkey, I hear.  I wonder when Trump will deport him.  All I can say is, he'd better not leave the country - getting back in is difficult these days, for foreigners with funny last names.

I for one, am so glad he came to America to sort everything out for us and tell us how our country should be run.

Like the former homeless editor of Breitbart, Yanni is a bit of an oddball.   He grooms himself like a GQ model and gives speeches onstage surrounded by his headshots - and a stylized logo of his name that looks like something a boy in Junior High School would draw on the back of his notebook while snoozing through history class.

Breitbart, of course, is having a field day with USC Berkley, criticizing them for "rioting" and "starting fires all over campus" when in fact, one portable light was set afire.   Yanni's speech was cancelled, and the irony of "free speech" being shouted down at the place where the "free speech movement" was founded was not lost on Breitbart.  In fact, they seems suspiciously eager to pounce on this irony, as if the articles had been pre-written.

The best way to diffuse Yanni is to let him speak.  Look at the image above, doesn't that pretty much say it all?  I mean, this raises narcissism to a new level.  And how can anyone take him seriously?

Protesting is playing into the far-right's hands.   After all, they can now paint the Left as a bunch of unreasonable idiots who don't even know what "free speech" means.

Or are they?   I am wondering, whether in these days of "fake news" and infiltration by "operatives" with hidden cameras, whether some of these "protests" are being instigated by agents of the far-right - or the violent aspects of them are being carried out or instigated by plants.

It sounds like a conspiracy theory, but those are all the rage today.   Mass-shooting in Quebec?  It wasn't a rabid Trump supporter, but rather a "Moroccan" who was working for ISIS!  That is the new conspiracy theory being advanced by the alt-right, within hours of the shooting.   And of course, it goes without saying no one was actually shot, but "crises actors" were hired - the same ones of course, as used last time (we have photo evidence!) to pretend to be victims.

It sort of makes one ill.

But that is Ratfucking in a nutshell, and it is how Trump got elected.

Breitbart is making much of the following photo in its "coverage" of the event operatives on the right may have manufactured: 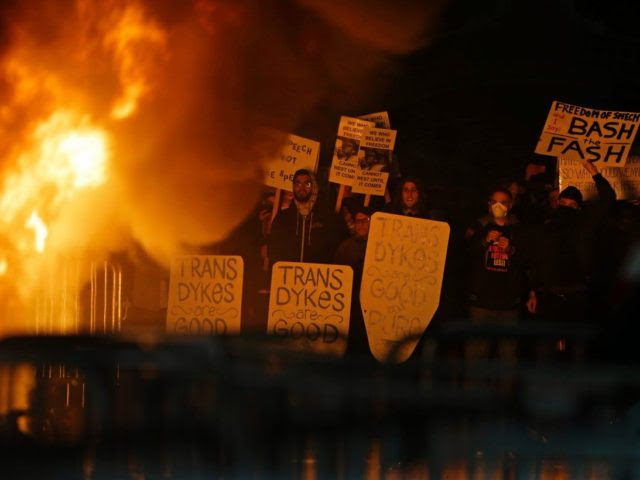 The signs are the tipoff.  Who writes "Trans Dykes are Good and Pure" - for three separate signs?  It is almost a parody of leftist sign-making - and also just plain odd.   And "Free Speech Bash the Fash" seems quite odd as well.  Even the densest of Leftists gets irony.

Maybe it is time the Left played the paranoia conspiracy-theory game as well.   Because, frankly, it seems that some of these protests are so over-the-top as to be tailored to fit a far-right narrative.


UPDATE:  It seems I am not the only one to smell a Ratfuck.  Robert Reich notes that the rioting seemed staged and very convenient for an anti-Leftist narrative.   The rioters were all young males wearing masks.  College Republicans, perhaps?