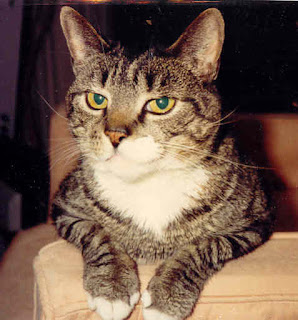 Everyone is something of a fussy kitty, but it really is an annoying way to live for everyone involved, including yourself.


Fussy Kitty-ism I have discussed before.  The question is, why are people fussy kitties and why, to some extent, do we all do it?  And why does it matter?

Being a fussy kitty is just plain annoying.  It is a passive-aggressive way that powerless people use to try to assert control in their lives by controlling others.   It is a good way to end up not getting invited anywhere, and to end up old and lonely.

What sort of things am I talking about?  Well, when you go to a friend's house and they offer you a lite beer, you don't say, "gee, what else you got, because I don't like that!" - that's fussy kitty-ism.   Worse yet is to reject one brand of lite beer or soda pop, claiming that you only prefer the other brand.  Liking Miller Lite over Bud Lite does not make you a gourmand any more than asserting a preference for Coke over Pepsi.  Yes, they are all dreck, but when your host offers you this, you either say "no thanks" or accept - there is no third option.

The Fussy Kitty says, "Well, I like to have everything just so, right?" as if that excuses rude behavior.  Moreover, their "just so" isn't really a real choice, but a made-up one, used primarily to demand special treatment or favors.   Fussy Kitties are the kind of people who go to chain restaurants than then try to order off the menu.  They will bore you for hours about how they got a Big Mac with a chicken patty in it, as they are "in the know".

Sadly, women are more prone to fussy kitty-ism than men, and I think it is because of how they are raised in our society - to be powerless and passive, only able to assert themselves through passive aggression.  So you have lots of women who freely call themselves "Princess" and expect men to bow and scrape before them and cater to their hysterical whims, because they are.... well, a Princess.   I am not blaming women here, but our society which at an early age sends signals to women as to how they are to behave.

When a child gets their first bicycle, the boy's bike is camouflaged, has off-road tires, a BMX handlebar, and a G.I. Joe gun mounted to the front of it.  The message is clear - the boys are expected to be rugged and rough and actually do things on their bicycle.   The "girls" bike is the powder-puff Barbie model in pink, with chrome fenders, a flowered basket on the front, and tassels on the handlebars.  The message here is clear, too:  Girls are not expected to ride their bike except on the sidewalk, and even then, only occasionally.

In some cultures, men go along with this idea - draping their wives in furs and diamonds as a sign of wealth and prosperity.   It is a way of showing status.  In fact, some call their spouses "trophy wives" - mere talismans of their wealth and success.  The wife is only expected to look good and consume products all day long by "shopping".

So what's the harm in Fussy Kitty-ism?   If the husband is willing to go along with this torturous lifestyle, who is it harming?   Well, everyone involved, plus innocent bystanders.   Passive-aggression never makes anyone happy, especially the person doing it.   And defining who you are by what brand of soda you drink is a shallow lifestyle at best.   At worst, it is a sure way to bankrupt yourself, trying to define yourself through purchases.

Will Fussy Kitty-ism every change?  I doubt it.  As I noted in my previous posting on the subject, it is a powerful marketing tool.  By getting people to swear allegiance to Coke over Pepsi, Chevy over Ford, or Miller over Bud, you've locked them in as consumers for life.   Never mind the fact that their "choice" is largely illusory and also idiotic - selecting one slightly different product over another.

Now, there are, of course, real gourmands out there who can tell one fine wine from another.  But it is an interesting thing, when they visit your home, they are the least likely to be fussy kitties, as they don't expect you to carry their favorite bottle of $250 wine.   In most cases, they accept whatever dreck you offer, because they realize that not everyone is sophisticated as they are.   It's called being polite.

For example, I used to not like seafood.  This probably stems from the fact that the only seafood I had as a child were freezer-burned Mrs. Paul's frozen fish sticks that probably had survived a power outage in Mom's freezer.   They smelled like an aquarium with a dead fish in it.  But one day, I realized I was missing out on so much in life by having idiotic "preferences" like that.  My friends were going to Bertha's Mussels in Baltimore and I said I would like to try them.  I realized that I was 40 years old and hadn't even tried half the things there were in life, due to fussy kitty-ism.

Since then, I have learned to enjoy many forms of seafood, including lobster autopsy.   And I've learned that there are better mussels than Bertha's as well!   I learned that being a Fussy Kitty means only that you miss out on life and annoy other people.   Fussy Kitty-ism is a form of FEAR, and fear is never an emotion to be trusted.

Stop being a Fussy Kitty and LIVE!

UPDATE:   It occurs to me that Fussy Kittyism might be a marketing tool.   In other words, people are fussy kitties because the marketers encourage them to be so.   In advertisements, we are told that everything that you buy is special and unique and particular to you - and that you are above the rest of the crowd because of your careful selection of consumer merchandise!   So maybe that explains fussy kittyism - it is just another form of marketing.
Newer Post Older Post Home