When They Ask You For All Fives... 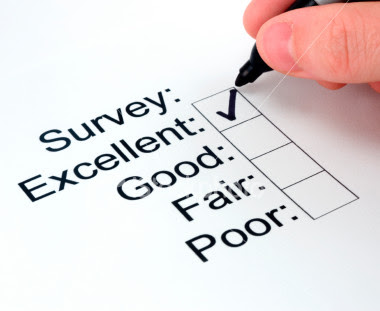 Whenever a business asks you to answer a survey with all top scores, something is amiss.

"You'll be getting a survey in the mail in a few weeks," he says, "You'll be doing me a personal favor if you put down all fives - anything less than that, I get in trouble!"

It seems like an innocent conversation, and maybe you think this is just grade creep - that the company is such a douchebag that they fire people for having a "four" on the survey.   But then again, is that really your problem?   Like I've said before, just answering surveys is often a huge waste of time.  It helps them, not you.

But more often than not, what is going on here is grooming.   Businesses get shitty reputations that are well-deserved.   They treat people poorly, they overcharge them, they rip them off.   And of course, these folks get pissed-off and go on some online review site or answer the company survey and put down all "1's" or one star or "poor" or whatever.

In order to counteract this poor review, you need to have a bunch of top reviews to drown it out.   A middling review of three (acceptable) or four (great) isn't enough.  You need to have a lot of those fives to bring the average up.

Sadly, you don't often get this sort of pitch until after the sale, or service, or whatever.   By then it is too late to undo the deal you've done.   But you realize that the people you have been dealing with are not exactly honest - they are asking you to lie on a survey, giving higher marks than they deserve.

And that is just sad.