Why Your Office is Too Hot (or Too Cold) 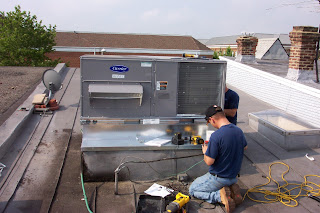 Commercial air conditioning systems often provide uneven heating and cooling, and this has more to do with economics than technology.


One of the biggest complaints I hear about HVAC systems is in the commercial environment.  Everyone has (or has had) an office that was too hot, too cold, too stifling, or so drafty as to be like a wind tunnel.  Why, given the state of our technology, can't we do better?

Well, the answer lies less in technology than economics.   The problem is, for the HVAC manufacturer, is that there are three customers for the HVAC system, and all of them have different interests.   And only one of them is actually paying the bill:

1.  The Builder (construction company, architect, designer, etc.) has to build the building for the owner and do so at a cost the owner can afford, while leaving a profit for the builder.    So the builder's requirement for the HVAC system is to supply a system that is only sufficient enough that they don't get sued by the owner.  Lowest installed cost is the primary criteria, with efficiency and comfort coming in far behind - if they are considered at all.

2.  The Building Owners (Insurance Company, Real Estate Investment Trust) owns the building and leases out office space.   They don't care one whit about the installed cost of the unit, so long as the overall cost of the building came in at the contract price.   If they are paying the utilities, which is often the case, they want the most efficient unit possible, with comfort a distant second.   Comfort to them is only important in terms of tenant complaints.

3.  The Tenant wants comfort, and doesn't care about installed cost or efficiency, unless in the rare case they are paying metered utilities.  Each office should be controllable to a set temperature and damn the utility bill.  Since they have little or no control over the finances, however, their needs are often dead last.  And as we shall see, often the tenant, in a "build out" of the space, makes matters worse.

Understanding how commercial HVAC systems work is key to understanding why they don't often work very well.  It is far too expensive in most cases to put separate HVAC systems in every room of a building.  One exception is some motels and hotels who use "through the wall" units (usually under a window) which are fairly cheap and allow for individual temperature control (comfort - important when you have hotel guests).   They also can be shut off when a room is not in use (which is most of the time) and if one unit breaks, well, you just don't rent that room.   If a central A/C system breaks, well, you have to shut down the hotel.

Single-level buildings like stores, small offices, and small factories use package unitary rooftop units like the one shown above, which was installed at our offices at 917 Duke Street.   We had an old Trane which the previous owner had installed used (surplus from the Postal Service) and I kept nursing it along for a few years, installing a new fan shaft, fan motor, and sheaves.   But eventually it went bust and I put this unit in, leasing it from GE Capital for four years, at which time they sold it to me for a dollar.   Leasing does make sense - for businesses.

As the name implies, these are packaged systems - all in one piece.  Drop it in with a crane, hook up the electricity and you're done.   The problem with them, of course, is that they heat/cool the whole building (or very large areas) and obtaining controlled temperature in any one room is hard to do.

In multi-story buildings like high-rises, an industrial chiller may be installed in the basement, with air handling units (AHUs) on each floor.   A chilled water (or hot water) coil is used to cool or heat the air.   Again, each AHU heats or cools a large area, so individual temperature control may be hard to do, or impossible.

In some installations, elaborate control devices may be installed in an attempt to control temperature.   These may be powered by compressed air or even system air pressure, although today, most are likely electronic.  The idea is, a small thermostat in each office could control temperature by operating a small deflector in a tin box above the ceiling.   In practice, these often don't work well.

And one reason they don't work well is that between the time the system is installed and the floor of the building is "built out" with individual offices and the like, things get moved around, and no one tells the HVAC guy.   So one office has an air supply in it, and the other has an air return.   One guy's office has a door than gets blown shut, and another blown open.   Close the door to the office and there is no air return at all, so the office becomes stifling.

The differences in gender clothing create a constant thermostat war in some offices, where scantily-clad secretaries insist on warmer temperatures, while suit-wearing men want it colder.  Some of this has been solved by going to more casual dress, however many companies draw the lines at men wearing shorts to work (while it is OK apparently for the women to wear skimpy dresses).   Maybe the company should just issue everyone Elvis-like jumpsuits, or Star Trek uniforms, and then the thermostat can be set at a temperature that everyone will like.

In some applications, technicians will install fake thermostats to appease customers.   If the build-out ends up such that the thermostat is in a paralegal's office, the partner will be furious and insist that he have "his own" thermostat.   So the building tech gets a thermostat, mounts it on the wall, dicks around with the ceiling tile for a while and says, "there you go sir!" and the clueless partner is saying, "I can feel the difference already!"

A friend of mine in the military told me they installed so many of these in the offices of the top brass that it became hard to figure out which was the real thermostat for the building.   They solved this problem with a series of discrete colored dots on the thermostats, so they could troubleshoot the real one later on.

The problem for the technicians is often there is nothing they can do to alleviate comfort complaints once a system is installed.   And in older buildings, which never anticipated the heat load of personal computers, the problem can be endemic. The only saving grace is that we wear fewer clothes today, so we don't need to be as cool.

Heat load includes people - each putting out as much heat as a 100W light bulb.   Put a lot of people in a room, and the heat adds up, and most people simply don't understand this - setting up a party in their home or at an event space, setting the thermostat to 72 degrees and wondering why when 50 people show up, it shoots up to 90 degrees in the space.   The best idea is to set the thermostat down to 60 before the party starts - it will heat up quite quickly to a normal temperature.

Throw in photocopiers, computers, and the like, and you have quite a heat load in an office building, and again, this load tends to be higher at the "core" of the building.   Unfortunately, some systems are installed with only one thermostat per floor, and thus the core gets hot and the perimeter freezes.  Offices on the South and West sides of the building heat up from the sun, while offices on the other sides freeze in the shade.  Multiple thermostats and air flow control devices could be installed, but this raises installed cost, which the builder doesn't like.   Guess who designs the system and writes the checks for the installation?  Yup, the builder.

As a result, the systems are often primitive in nature without a lot of fine-tuning to the controls.   Even if the system is zoned on each floor, with multiple thermostats, often walls are later installed between the thermostat and the temperature control device.   It is almost comical in some instances to see Joe in one office turning up the thermostat because he is "freezing" while Jim next door can't understand why he is living in a sauna.   Joe's thermostat controls Jim's office and vice-versa.

Oftentimes, after an office space is built out, a technician is sent in to "balance" the system by re-arranging air ducts or installing or adjusting dampers, to even out air flow and attempt to provide uniform temperature in the work space.   Sadly, this work is often done before the floor is occupied, so the actual loads on the space are not known.   And since the technician doesn't have days to study the patterns of sunlight and load changes throughout the day, he can only do a rough approximation of "balance" in any event - and the tools he has at his disposal are somewhat primitive anyway.

Sadly, I am not aware of any new technology that can fix this problem.  When I worked in the air handling lab, we kept trying to use pneumatic or system-pressure based solutions, and builders were loathe to install electronic controls - which would require a union electrician to install.  I am sure today that more electronic controls are the norm, but again, if they are installed before build-out, even the best control system can be flummoxed by a poorly placed wall blocking the air flow from supply to return.

The best solution, I have found, is to tell your secretary to wear longer skirts, or a pantsuit, and bring a sweater.  But freezing or sweating in the office seems to be more the norm than the exception.
Newer Post Older Post Home