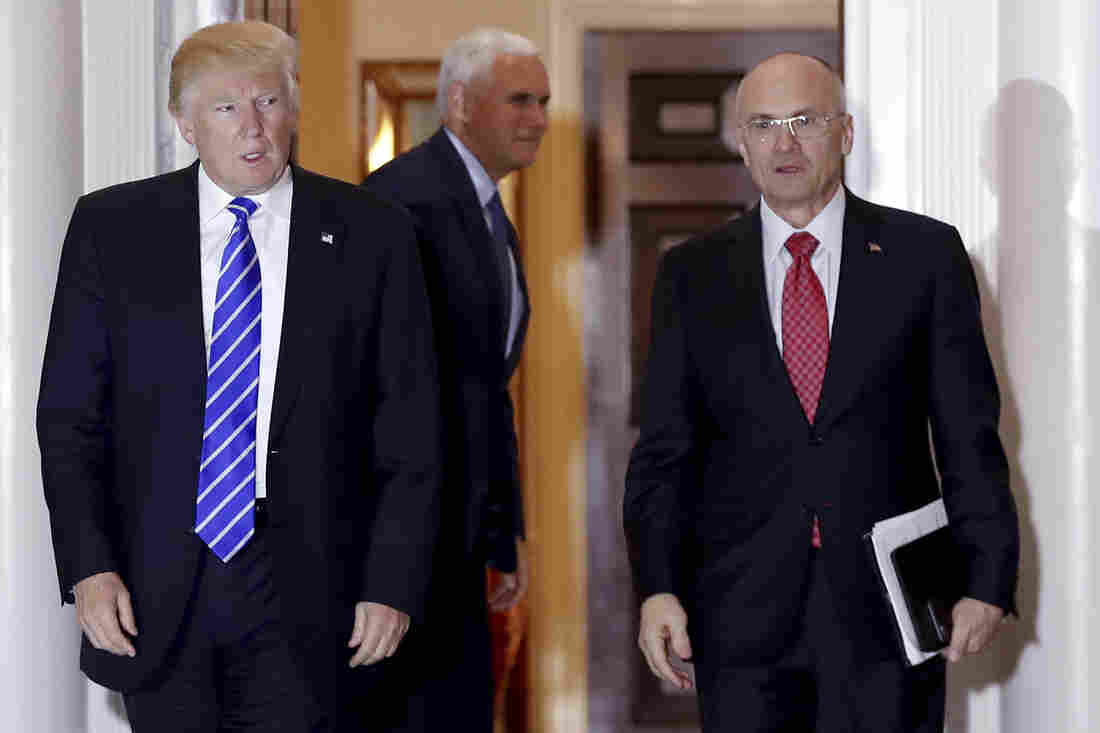 Trump's cabinet nominee did not "fall" because of labor protesting his right-wing views.  He was axed for being too Left-wing.   But the Left spins the story to make themselves look effective when they are in reality, ineffectual.


Once again, I have to throw the clock radio against the wall this morning.  The only news program on the radio anymore is NPR, unless you want to listen to Jesus radio.   Actually, there were two reasons I had to wreck yet another radio, this story about Andrew Puzder and a recording they played, apparently sung by Barney, chanting, "Books are fun!" which nearly made me throw up.

The real reason Puzder had to withdraw wasn't that labor protests made his candidacy nonviable, but his earlier statements about immigrant amnesty.  This was an unforgivable sin among Republicans, who believe that political heresy should be punished in all instances.

"As CEO, and later as a Trump campaign adviser, Puzder has been outspoken about his views on labor policy, contributing to newspaper opinion pages and on television, discussing issues such as immigration. During the Republican presidential primaries, Puzder advocated creating a path to legal status for unauthorized workers living in the U.S. He endorsed a more moderate "comprehensive immigration reform," similar to what candidates Jeb Bush and Marco Rubio were proposing at the time."

But to hear NPR tell it, it was labor protests and concerns about raising the minimum wage that spiked his nomination.   This is narcissism of the first order.  The sad truth is, labor has little or no influence in politics these days, as the last election illustrated.   It is not that people don't want unions, but that they want jobs more.   Blue collar workers - as well as white collar ones - realize that while it is nice to go out on strike and make more money, having a steady job even at lower pay is probably a better bet.  They realize that when you price yourself out of the labor market by a factor of 2X or 3X, your job is not secure.  They also realize that working conditions today are far from the sweatshops or dangerous mills of the 19th Century.

And that is bookended by another story they reported, but in a muted fashion.  Boeing workers in South Carolina decided not to unionize after a long drawn-out battle and vote.   Why this is so is not reported by NPR, who seems to have a decided lack of interest in the subject.  I mean, after all, the "workers" always want to unionize, right?  They must have been intimidated by company lackeys or something!  Or they are just too dumb to understand that maybe giving over a portion of their paycheck to organizations that are run like the mafia (and in the past, many had connections to the mafia) is a good deal!   What they need are more liberals (who have never spent a day working in a factory) to help them see the light!

Maybe.  Maybe not.  As a former Teamster, I can understand why they don't want to let union thuggery into their lives.  Like I said before, my hippie brother who never worked a day in his life in a factory, had wild ideas about the "workers" and how they should unionize and whatnot.   He was a hypothetical liberal - with lots of great ideas about how other people should run their lives, but few about his own.

I think the Boeing employees in South Carolina - 74% of them in fact - decided they didn't like what they saw going on in Seattle, with more and more labor unrest causing disruption in the workplace, higher costs, and threats to the company's security.  They also saw that as a result, Boeing wasn't investing more in Seattle, but rather in other places, such as South Carolina.   And I think they also realized that they make a good living at Boeing - with good benefits as well - in an era where getting a good job with a big company isn't easy to do.   And I think they realize that their future is tied directly to Boeing's future, which is anything but assured.

Go on strike, get higher wages, but for how long?   The example of GM weighs heavily on everyone's mind.   Boeing might look like a wildly profitable company, but many of their product lines are in trouble, including the venerated 747.   Airbus is constantly nipping at their heels - and getting huge subsidies from European governments.  Landing overseas contracts means sending production overseas as well - making Boeing a true international company (Airbus has done the same, opening a plant in Mobile, Alabama, where I am sure labor rates are lower and labor rules are more relaxed than in France!).

America's love affair with big labor has been in a steady state of decline for decades.   And it is not hard to figure out why, given the state of the economy from the 1970's onward.   If you ever worked in a union factory, you got pretty tired of having to pick up the slack for the layabouts and complainers and the do-nothings.   That is, unless you were one of those slackers.  And that was the problem with unionism - it promoted the slackers and do-nothings to the top of the heap.  Those were the sort of folks who became shop stewards and union officials.  The net result was, everyone worked down to the level of the laziest worker, and what were once proud companies with decades of storied history, became shells of their former selves, as they could not afford to invest in new machinery, equipment, or technologies - as every last penny and then some, went out the door in the form of inflated union wages.

(And don't get me started on government unions.  The public service unions in Wisconsin made a major miscalculation in their recall vote of the governor, failing to realize that the number of taxpayers in the State outnumbered the number of union members.   We all got tired of five-figure property tax bills, which are the norm in "blue" States like California, New York, and New Jersey.   The problem with unionism, is that somewhere, someone has to foot the bill, and often this "someone" is us.   For some reason, the Democratic party failed to notice what happened in Wisconsin - Hillary never even bothered to campaign there.   Hubris.)

But again, management was also to blame for going along with this.  But maybe they didn't have a choice in an era where you had to negotiate with strikers and couldn't even close the plant if it was losing money.   Today in Germany, the same is still true.  GM is trying to sell its money-losing Opel division to Peugeot, as the high wages and strict union rules (and government regulations) prevent the company from closing a money-losing factory.

And the attitude of the union reps there is reprehensible:

"I have no intention of allowing GM to walk away from our plants and workers - so my message to the workers at Luton, Ellesmere Port and the tens of thousands in the wider supply chain is this, remain strong and stay united.

"The UK and the EU are among GM's biggest markets - if they think that they can walk away from dedicated workers and loyal consumers without a care, they need to think again."

Frankly, this floored me.  The union whose high wages and restrictive work rules are killing the plant is dictating to the company how it should be run, making thinly veiled threats, and arguing that GM has an obligation to run a money-losing enterprise indefinitely, because, well, just because.
They even argue that GM has to stay in the market for its loyal customers.   This is just insanity, and why more German companies, such as BASF, are opening plants in the United States and not in Germany.  It is why BMW is expanding operations overseas (including the US) and less so in its home country.  It is why America now exports cars among other things, which I can watch every day from my front porch as the car carriers leave Brunswick, GA, loaded with American-made Mercedes, BMWs, KIAs, Huyndais, as well as construction equipment.

But again, the Left is delusional.   The German unions believe they have a right to run the company and force a company to lose money.   And this is the sort of twisted thinking that American workers are rejecting - that a job is a "right" and that profits are not important, so long as people have jobs.   Labor in Britain tried this with the coal industry, but Margaret Thatcher shut that nonsense down.  Who the hell wants coal anymore, anyway?

So what's the point of all of this?  Only that the Left is losing credibility - has lost credibility - and they are still pushing an agenda that is far past its sell-by date.  Republicans haven't been successful in getting elected at all levels of government because of their platform and agenda but in spite of it.   The Left or "Progressives" as they like to be called, have hijacked the Democratic Party and thrown out anyone who disagrees with a neo-Communist, Socialist agenda.  If you aren't in favor of "free" college, health care, jobs, houses, or food, than you are no longer welcome as a Democrat.

And so long as the party panders to the far-Left, they will continue to lose elections - and lose the electorate.

And sadly, this is not even allowed to be discussed.   As one journalist discovered, after doing an interview with one-man boy-band Yanni Yopalopalus, people on the Left these days have stopped thinking entirely in favor of chanting slogans.   Everyone is suspect of thought crime these days, and if you don't like someone's political positions, you shout them down, boo them, demonstrate, riot, or just refuse to listen to them.

And this is sad - people on both the Left and Right having no idea what the other side really believes but rather believes in a caricature of their actual beliefs.   Each side points to the most radical of the other as an "example" of that narrative.   Republicans are all fundamentalist Christians with guns, Democrats are all radical transgender Islamic radicals.   Neither perception is true.

But of the two parties or wings, one is clearly being more successful in winning elections and they are doing this by snagging more of the moderate vote, not because of their rightist positions but in spite of them.  The Democrats could take a lesson from this playbook.   It is time to shed the ineffectual far-Left and embrace the center.   Centrists can get elected and they can get things done.   Maybe not everything the Leftists want, but more than is getting done today.
Newer Post Older Post Home