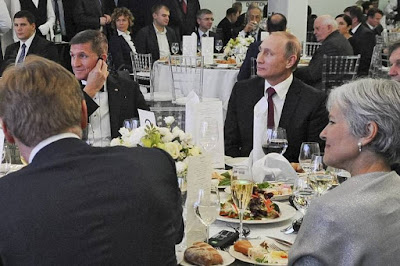 The media has been publishing a cropped version of this photo, showing former national security advisor Flynn next to Putin.  But who else's smug face is in this photo?  Yup, Jill Stein!

The Trump administration is quickly morphing from a bold new populist and conservative movement into a rolling dumpster fire chasing Trump down the street.  What is interesting about the situation is that Flynn was accused of chumming around with the Russians, in particular, old Vladimir Putin, who is shown in this photo having dinner with Flynn.

What is fascinating to me is that the media uses a cropped version of the photo above, which eliminates one member of this love-fest party - Jill Stein.   It is fascinating to me that she was present at this meeting.   During the campaign, it was noted that she was traveling to Russia, and many folks at the time said, "What the fuck?" but sort of forgot about it because she was not deemed to be relevant and it was assumed that Hillary would win.  So it kind of got swept under the rug.

What is disappointing to me is twofold.  First, that she would travel to Russian and remain silent about human rights abuses in Russia as well as abuse of the political process.  The Russian foreign minister this morning tweeted that the dismissal of Flynn had overtones of "thought crimes" which is ironic as the Russians just upheld the conviction of a Putin opponent for criticizing Putin.   The country that invented thought crime and still practices it today - aggressively - calls us out on it.

The second thing that disappoints me is that anyone in their right mind could support Jill Stein, particularly after she was paling around with Putin.   If you are voting for a candidate on the Left, maybe you shouldn't be voting for someone who supports (and argues for better relations with) a brutal dictator.

And how many people "protesting" and marching today either voted for Stein or didn't vote at all?

The real problem for the Democratic Party is the rise of these "Progressives" who want to turn America into a socialist paradise.   The problem is, very few people in America want a socialist paradise.  Socialism loses elections, time and time again.   Even the folks who would arguably benefit from such cradle-to-grave social programs tend to vote against it.   And maybe they realize that while it all sounds good on paper, when push comes to shove, turning your life over to government bureaucrats tends not to be the best solution to anything.

As for Flynn, from what I am hearing, he and his son are going to "self-investigate" Comet Ping-Pong Pizza and get to the bottom of this "Pizzagate" scandal.

P.S. - the big problem with Flynn was that before he lost his mind and started tweeting about Pizzagate, he was a die-hard Democrat.
Unfortunately, his shitty management skills got him fired by President Obama, and like a petulant child, he decided to go after Obama and the Democrats by supporting and spreading wild conspiracy theories.   I think the Republicans never trusted him, as he was not a right-wing ideologue, but rather a "useful idiot" whose rage they could employ against Hillary.

Trump's mistake was to hire him (and Bannon) as part of his administration, instead of dumping that dead weight as he should have.  You use people like that in a campaign, and then get rid of them once you are in office.  Every President does it.   I am certain that Pence and Kushner will push him to dump Bannon before long as well, as Bannon's antisemitism isn't going to sit well with anyone for long.