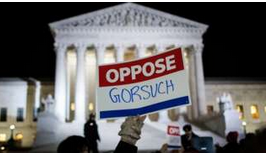 
Our two-party system is broken only because the two parties are broken.   The other day, when Democrats boycotted a confirmation hearing, two Republicans actually said, without a tinge of irony, "Well, we never obstructed Obama this way!"

They seem to conveniently forget delaying a Supreme Court nomination for nearly a year, citing the non-existent "Biden Rule" which is based on an offhand comment Joe Biden once made.  If all off-hand comments made by Joe Biden are now "rules" we are all in a ton of trouble.  What the GOP did for the last eight years - and the eight years of the Clinton administration - was obstructionist.  Clinton even cooperated with Republicans on a number of measures - including welfare reform, only to be "impeached" for his sleeping habits.

And now it is the Democrat's turn again.  During the Bush years, Bush was able to push a lot though using jingoism and the "war on terror" to shame Democrats into voting for the war in Iraq, beefed up "homeland" security, and whatnot.   Obama did not have such a cudgel to smite the Republicans with, and the Democrats squandered the first two years in office with petty squabbling.

So now, we are in for four more years of obstructionism, and the GOP will paint themselves as innocents who never obstructed anything and of course, try to make the Democrats look bad.

And the Democrats will do all in their power to help the GOP do this.   It is sad.

Perhaps this can all be traced to Watergate.   A lot of people don't understand what Watergate was all about, other than Nixon did something bad, but they are not so sure what it is.  Let me explain it to you in simple terms:  Ratfucking.

Ratfucking is a name that some young Republicans used, starting in their early college days - when running for student council.  It was the sort of "dirty tricks" they would perfect later on in Congressional and Presidential campaigns.   A typical "ratfuck" might be to get a copy of the opponent's letterhead and then type a scandalous letter on it, where the opponent is admitting to being racist, a member of the KKK, having adulterous affairs, or whatever.

You don't give this to the media, but rather distribute it, anonymously, to people in swing neighborhoods.   Since it is all under-the-radar, no one can nail you for it, and if the opponent tries to disclaim the fake letter, well, that just gives it a wider audience, as the mainsteam media won't report the phony letter until the opponent denounces it.   You win either way, and Joe Voter (who let's face it, is a first-class idiot) will say, "well, that letter was probably fake, but you never know, right?"

Ratfucking worked.   But the purveyors of this technique got out of hand and started breaking into offices and stealing things - like records from Daniel Ellsburg's psychiatrist.   Nixon had a million-dollar "slush fund" in the White House safe to pay for these little tricks - money provided to him by Howard Hughes.

The problem with Ratfucking is that you constantly worry about blowback.  If it can be traced back to you, it will backfire in a big way.   The Nixon Whitehouse got so paranoid about this that even though they were beating McGovern by a huge margin, they decided to break into the Democratic Offices at the Watergate Hotel to bug the phones and search records to see if the Democrats had a "smoking gun" about the slush fund.  They didn't - and never did.  It was over-reaction by the Nixon Whitehouse.

The actual "crime" they could paint Nixon with was knowing about this and covering it up.  No one could actually prove Nixon ordered the break-ins or the Ratfucking.   But Democrats were pretty fed up with Ratfucking and went after Nixon, who, as a President was really no better or worse than his predecessors or successors, if you look at the policy record.

But Watergate started this entire era of partisanship.  The GOP couldn't wait to "get even" with the Democrats, and since those days, everything is labeled "something-gate" even trivial things or entirely made up things.

And with the Internet, Ratfucking has taken on a new life as "fake news" which is the same thing - starting rumors and being able to plausibly deny you started them.  And now today we have a President who Ratfucks with every tweet.   "Alternate Facts" are the new norm, and smearing your opponent is the name of the game.   This is how we got here, and it isn't going to get better.

The new Supreme Court nominee isn't Satan himself.   He is pretty much a carbon copy of Scalia, which is what you would expect a Republican President to nominate.   He may not agree with you about abortion or how the constitution should be interpreted, but these are political and legal viewpoints that people are entitled to.  He is not saying things like, "Blacks should be slaves again" or "Women should be treated as property" - at least that we know of.

I am not sure that "I don't agree with his views" is a legitimate grounds to stymie a nomination. And if you can obstruct the nomination, the question is, for how long?   Senate Republicans can change the rules to allow for confirmation by a simple majority.  So if you obstruct by filibustering, you only delay the inevitable, are made to look foolish and ineffective, and really don't accomplish anything other than giving the GOP ammunition to say, "Well, THEY DO IT TOO!"

Just because the bad guys do bad things, doesn't mean you should do the same.  It only legitimizes bad behavior and what's more, makes you indistinguishable from the bad guys.

Save the big guns for the big issues.   America will get protest-fatigue in short order, which will make protests about serious issues ignored.
The Democratic Party should be gearing up to take back the House and Senate in 2018.  Meaningless protests - which are ignored by the public and the President - are just making things worse, not better.
Newer Post Older Post Home