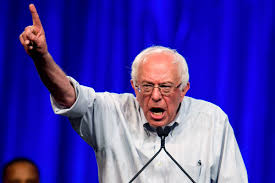 There are a lot of people who run the country who have never worked a day in their lives at a real job.


One interesting thing about politicians, is that today, many of them are professional politicians, and this is largely a mistake of our own creation.   In order to be elected to office these days, you have to live the life of a choir boy - preferably not molested by a priest, and preferably not Catholic (yes, even today).

You have to be a real boy-scout and have no "dirt" in your past that might even suggest some sort of impropriety.   So we really limit who can run for office to people whose lives are totally unreal or surreal, or just fake.  And when they run for office, we force them to adopt these artificial personas that are more caricature than reality.

And as a result, we have people who never did anything in their lives other than to run for office.   Bernie Sanders is an example of this, and one reason why I never understood the fascination with him.  He was against a lot of things - mostly people who actually do things - as being capitalists and evil, not realizing that a lot of people struggle to run small businesses and feel put-upon by the Bernie Sanders' of the world who don't realize what a struggle it can be to make payroll.

The same is true on the Right - there are a lot of politicians who have elaborate theories about how the economy should be run, but no real experience in running a business.  Sure, George Bush played at running an oil business - in the carefully minded playpen set up by his Dad.   But he really never ran the risk of real failure, even after he failed at it.

Other politicians "work" at think-tanks or law firms, in-between elections, but usually the "work" comprises trading on their names and goodwill.   Very few are people who start and run businesses, as working for the government would be a pay cut to them.

And few are working people - folks who punched a clock in the factory - and know what is like to work a job from 9 to 5 for 30 years on the hope they will get a pension and be able to retire after raising a family and putting the kids through school.

And unfortunately, we as citizens get whip-sawed between these two extremes - these professional politicians who have theories on how our lives should be lived but of course, no real experience.   They want to create a health care plan for us little people, secure in the knowledge that they will never have to use it themselves.  They have theories about our lives, but no real understanding of them.

They want to change our tax code, but likely never have had to sit down and fill out a form 1040 in their lives.  Their accountants handle all of that, of course.   And of course, they probably pay less in taxes - as a percentage of income - than we do.   At least we know Mitt Romney did.

One of the "selling points" of the Trump administration was that Trump was a "businessman" and would know how to run the country like a business.   This is sort of hard to parse, as in terms of business, his record is kind of spotty.  He built luxury high-rises using tax incentives designed for public housing.  He paid too much for Atlantic City casinos, over-mortgaged them, and then walked away when it all went to hell - leaving Atlantic City as a nightmare ghetto.

In the end, he basically had nothing left but his name, which he licensed to everything from condo projects to neckties and suits, to steaks, to a reality TeeVee show, which of course, was not real.   He is more celebrity that businessman.   And the Republicans castigate Hollywood types for even having political opinions but then elect one as President (Republicans seem strangely silent about Hollywood types having political opinions when it is someone like Charlton Heston having them, however.  Then it is "free speech" - right?).

The Left, of course, doesn't like the idea of business people in government.   Rex Tillerson was confirmed as Secretary of State, and Democrats, other than Virginia's John Warner denounced this pick.  The problem here is we have a businessman in government, but not some guy running a corner store or a haberdashery like Harry Truman, but one of the richest people in the world.

In fact, some folks have had to decline to work in the Trump administration as untangling themselves from their business interests would be close to impossible.

Of course, we have had business people in the White House before - most notably Robert McNamara - the guy who brought you the Edsel and the Vietnam war.   Again, a guy with a lot of business theories (one of the "whiz kids" at Ford who had no real experience in the car business, but a business degree) but no real experience about how average people live.

Sadly, it seems this trend will continue indefinitely.  Ordinary people simply cannot run for office, because they likely tweeted something wrong or posted something on their Facebook page that would come back to haunt them.  The media holds our political leaders to an almost puritan standard, acting shocked when they do human things like get drunk or have sex (two pastimes more popular than baseball and apple pie in America).

So we will continue to have these theorists, who don't live in reality, but instead live artificial lives, and study us regular folks as if we were specimens in a zoo - trying to discern our eating habits and whatnot and control the environment in our cages.   One side wants it too hot, the other side, too cold.   In the meantime, ordinary people suffer.